Fluorescent oligonucleotide probes have a long-standing history in detecting and visualizing nucleic acids. Fluorophore labels are integral to multiplex reactions, fluorescent microscopy, PCR, and many other applications. With the addition of new internal fluorophore-dT phosphoramidites, including JOE-dT, Quasar® 570-dT, and Quasar® 670-dT, Glen Research is excited to expand the current line of products (Figure 1). Each fluorophore possesses unique spectroscopic characteristics (Table 1).1 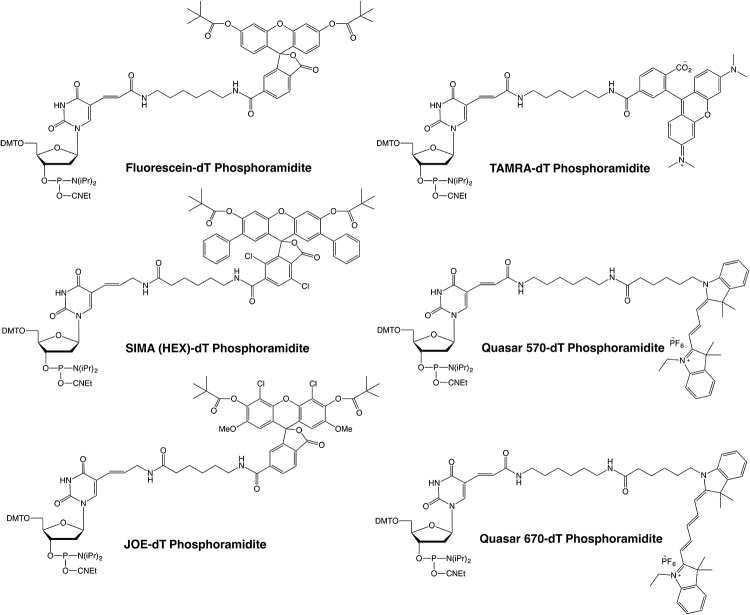 Quasar 570 and 670 fluorophores are derivatives of cyanine 3 and 5, respectively. Cyanine dyes consist of two heteroaromatic rings that are separated by a polymethine chain, and due to resonance, these have a positive charge dispersed across the two nitrogens (Figure 2). The length of the conjugated chain determines the distinct properties of the cyanine fluorophores. Although we offer other cyanine products, the structures differ slightly, as linker lengths and substituents on the aromatic rings vary (Figure 3).

The NHS esters have a methyl group on the aromatic quaternary nitrogen, a C6 linker and SO3 substituents on the aromatic rings. The cyanine 3 and 5 phosphoramidites have symmetrical propanol linkers at the heterocyclic nitrogens. Lastly, the Quasars have an ethyl ammonium and an extended linker off the C5 position of the thymine nucleobase. As expected, and despite some subtle differences, the Cyanine 3 and Cyanine 5 products exhibit the same spectroscopic characteristics.

Historically, the earliest versions of FRET probes used an internal TAMRA, either by TAMRA NHS ester (50-5910) or TAMRA-dT (10-1057), as a quencher of the 5’-fluorophore.1 Now, internal fluorophore labels are more popular for use as probes in many applications. Internal fluorophores can either be incorporated using a fluorophore-dT amidite, a nonnucleoside phosphoramidite, or an amino modifier-dT labeled with a dye NHS ester. Detritylation and extension at the OMMT group (Figure 3) may allow non-nucleoside cyanine phosphoramidites to be used internally, but this method is less commonly employed, as base pairing and stacking in a duplex may be disrupted. For these reasons, the preferred method for labelling oligonucleotides with cyanine dyes site-specifically was cyanine NHS ester coupling with amino-modifier C6 dT.2 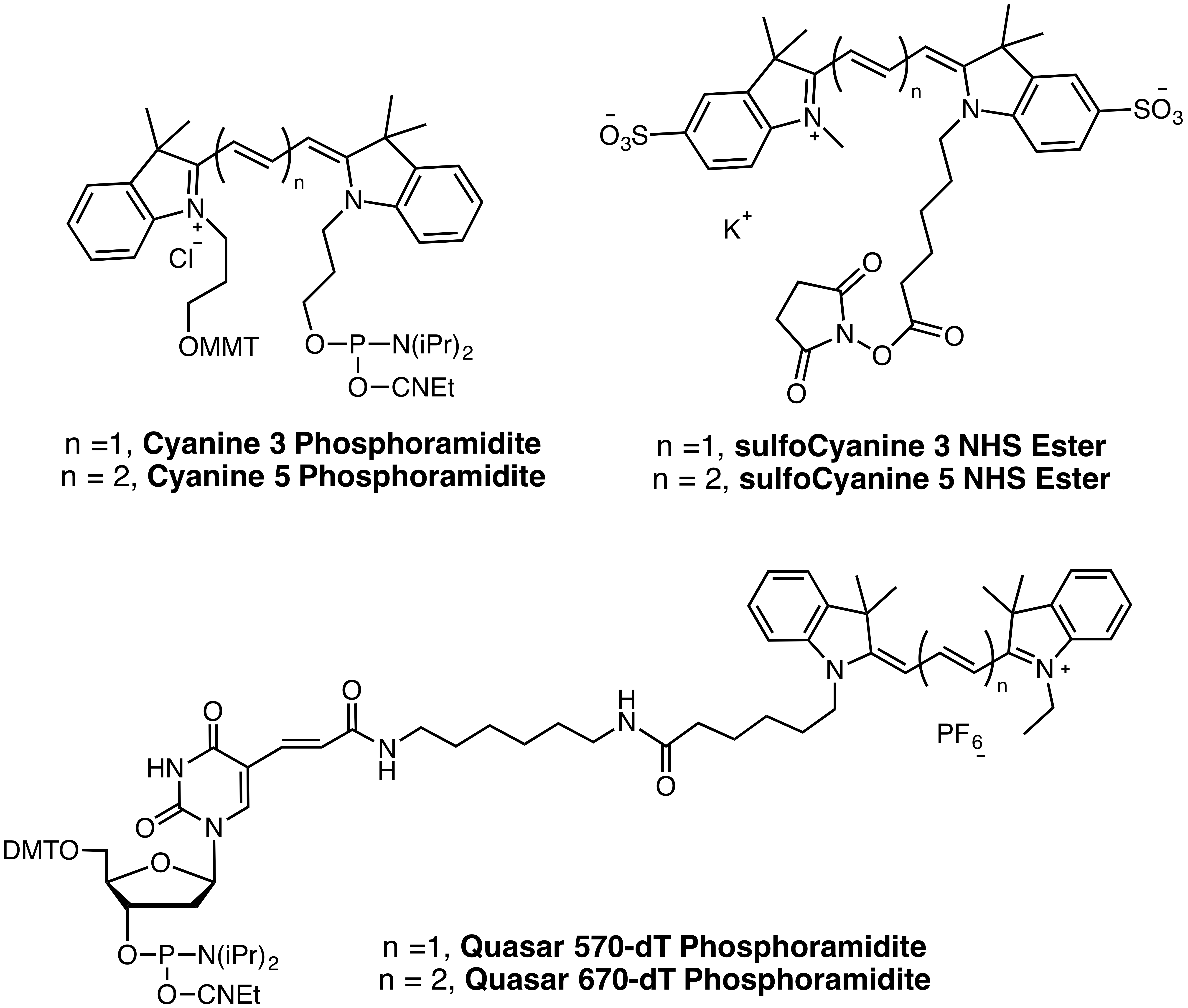 Multiplex assays are now a standard in efficient, high-throughput genetic analysis. About a decade ago, a six-channel system to simultaneously analyze mutations in the human CFTR (cystic fibrosis) gene was established by Prof. Tom Brown from the University of Oxford.4 Cystic fibrosis (CF) is an inherited life-threatening disorder that damages the lungs and digestive system. Scientists have found more than 1,700 different CF-causing mutations in the CFTR gene.

Six spectroscopically distinct fluorophores were incorporated internally to oligonucleotides probes in a six-color PCR-based HyBeacon system.4 At the time, the range of fluorophore phosphoramidites was unavailable, so probes were synthesized primarily using dye NHS esters and amino modifiers. HyBeacon systems are currently being developed for the rapid diagnosis of bacterial infections and genetically related diseases, as well as for forensic applications.5

Fluorescent nucleic acid probes that do not fluoresce when the probe fails to recognize its target nucleic acid are important for microscopic analysis of intracellular nucleic acids, as they enable reliable, labor saving, and real-time fluorescence observation. More recently, this was achieved using oligonucleotides containing fluorescent dyes with a hybridization-dependent fluorescence response called ECHO (exciton-controlled hybridization-sensitive fluorescent oligonucleotide) probes.6 Thiazole orange (TO), an asymmetric derivative of cyanine, was doubly incorporated internally at a dT position in an oligonucleotide. Alone, ECHO probes were effective for sequence-specific visualization of single-stranded nucleic acids like mRNA. Adapting ECHO probes for fluorescence in-situ hybridization (FISH) techniques proved to be highly reproducible, stringent, and compatible with other fluorescent cellular labeling techniques. ECHO-FISH was used to detect and image intracellular RNA targets in live cells. In order to better understand spatiotemporal correlations between gene expression and interactions between nucleic acids in live cells, the authors used other cyanine derivatized fluorophores to create a series of new ECHO probes of different colors.

Internal fluorophores are also useful in oligonucleotide substrates that do not bear 5’- and 3’- ends, such as circular DNA. DNA topology and topoisomerases play important roles in many biological processes, including DNA replication, recombination, and transcription. Internal fluorophore and quencher labeled oligonucleotides were inserted into a circular DNA, which was then converted into a supercoiled form via the addition of DNA gyrase in the presence of ATP. The DNA was relaxed by the addition of Topoisomerase 1.7 The commonly employed Förster resonance energy transfer (FRET) was used to study the transition between supercoiling and topoisomerase activity on the circular DNA template. This DNA molecule has many potential applications, including the screening of small molecule inhibitors targeting topoisomerases and gyrases, which may have implications in both anti-cancer and antibacterial therapeutics.7

As with our other fluorophore-dT phosphoramidites, we recommend a 10 min coupling during oligonucleotide synthesis.

Quasar® products are subject to certain intellectual property rights owned or controlled by Biosearch Technologies, Inc. and its affiliates. Products are sold for research use only.