Reversed-phase high performance liquid chromatography (RP-HPLC) is a popular method of analyzing and purifying oligonucleotides for both DMT-ON and DMT-OFF preparations.1, 2 For the former, the hydrophobicity of the DMT group is leveraged to separate DMT-OFF truncated sequences/failures away from what should be desired, full-length product. For DMT-OFF syntheses, an ion pairing agent interacts with the charged oligonucleotide backbone to facilitate resolution of sequences based on length. For both applications, a gradient of acetonitrile in 100 mM triethylammonium acetate buffer (pH 7) will generally work well. We offer a neutral 2.0 M solution of triethylammonium acetate (TEAA) (60-4110) that can be conveniently diluted 20-fold for exactly these purposes, and many of our customers appreciate the convenience of not having to make this buffer themselves.

In recent years, there have been reports of using hexylammonium acetate (HAA) for DMT-OFF purifications.3, 4 HAA gives much higher resolving power for both polythymidine sequences as well as sequences of mixed base composition. Although hexylamine and triethylamine share the same chemical formula (Figure 1), the longer alkyl chain of hexylamine interacts more strongly with typical reversed-phase resins, making the ion pairing process more effective. To give our customers more options in terms of analyzing and purifying oligonucleotides, we are adding a 2.0M HAA buffer to our offerings.

Like our TEAA buffer, a 20-fold dilution of the 2.0M HAA will give a 100mM working solution. For purification, some modifications in workflow may be necessary. The enhanced ion pairing of HAA results in much stronger retention of oligonucleotides that require higher gradients of acetonitrile to elute. A product fraction obtained using TEAA that has 11% acetonitrile in it might have 40% acetonitrile if purified with HAA. Also, HAA is a less volatile buffer because the boiling point of hexylamine is notably higher than that of triethylamine (131 versus 89°C).

To illustrate some of these differences, both buffers were used to analyze a mixture of crude, DMT-OFF T10, T15, T20, T25, T30, T35 and T40 sequences (Figure 2). The HPLC gradients were set up such that the first peak and the last peak eluted at approximately the same time for both analyses. We were able to confirm that the HAA buffer separation indeed gives higher resolution separation for poly-T sequences. Many of the peaks are notably sharper and narrower. This is probably because the gradient of acetonitrile in TEAA (9-11 %) was much shallower than that in HAA (30-40 %). 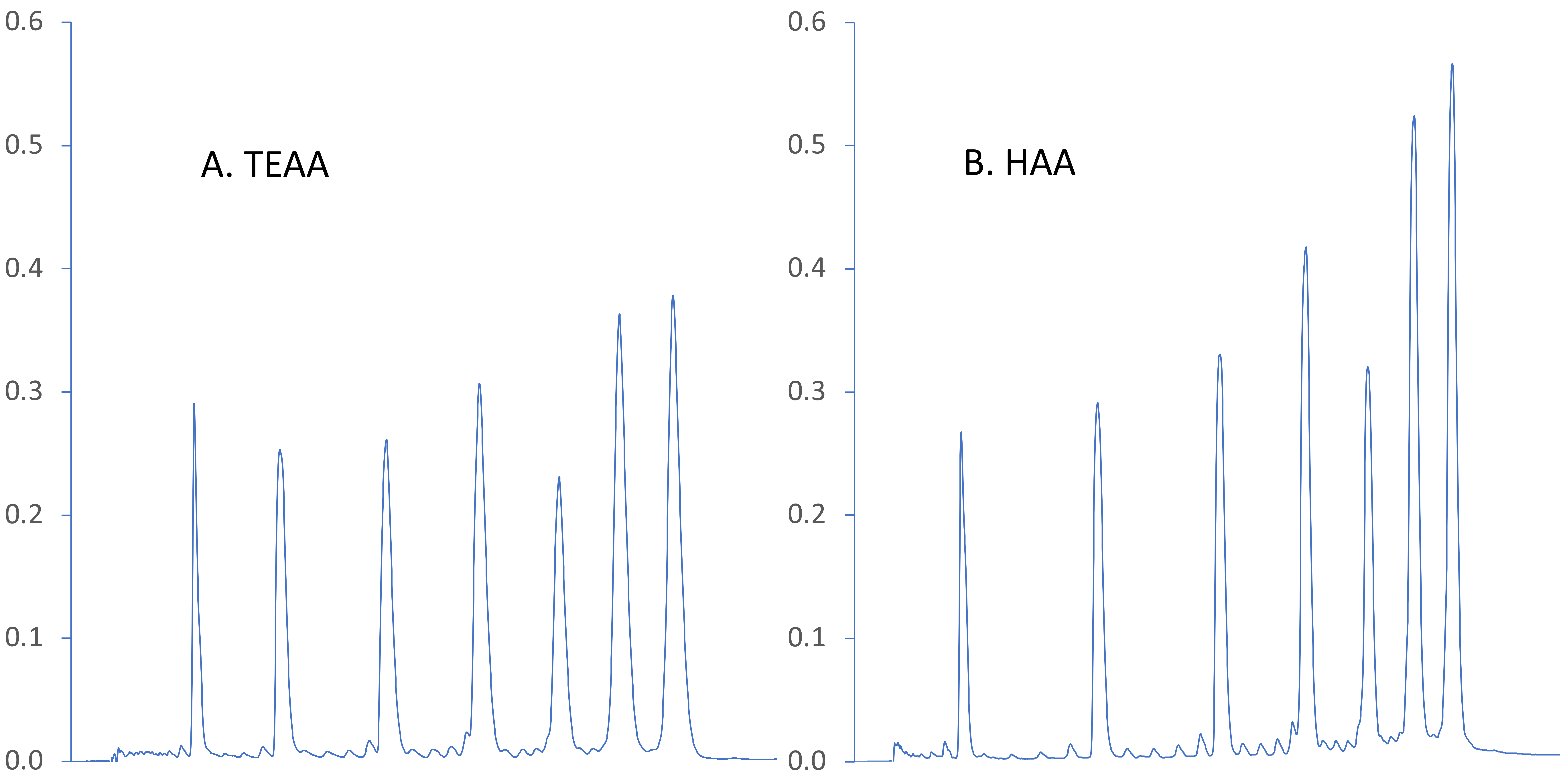 It should be noted that we offer both reversed-phase-like cartridges and gel filtration cartridges to facilitate DMT-OFF HPLC purification. A Glen-PakTM cartridge can remove shorter failure sequences prior to HPLC and allow the HPLC process to focus on the removal of other oligonucleotide impurities such as deletion mutants. Likewise, a Glen Gel-PakTM can be used to remove the HAA from product fractions post-HPLC. Solutions that are diluted to have less than 20% acetonitrile can generally be applied directly to the Glen Gel-Pak. Otherwise, evaporation of the samples and re-solvation in water would first be necessary.