The rapid emergence of oligonucleotide-based therapeutics, such as small interfering RNA (siRNA), antisense oligonucleotides (ASOs), and therapeutic messenger RNA (mRNA), is transforming the strategies of the pharma industry and opening exciting new avenues of research.1 To support this development, new and innovative ways of introducing fluorescent entities (fluorophores) to these types of modalities are needed. Drug development projects are particularly reliant on using fluorophores that do not perturb drug-target interactions or affect affinities towards, for instance, lipid membranes or proteins, to deliver results that are representative of the performance of the corresponding unmodified drug.

Glen Research has a long-standing tradition of providing a range of fluorescent base analogues (FBAs), which can be used as integrated and nature-mimicking alternatives to bulky, amphiphilic fluorophores such as ATTO-, Alexa-, or cyanine dyes.2 Glen Research’s FBA product line includes the tricyclic cytosines tC and tCO (Figure 1), which are well-known for their excellent fluorescent properties inside RNA and/or DNA, as well as for maintaining canonical base-pairing and secondary structures of the corresponding duplexes.3-6 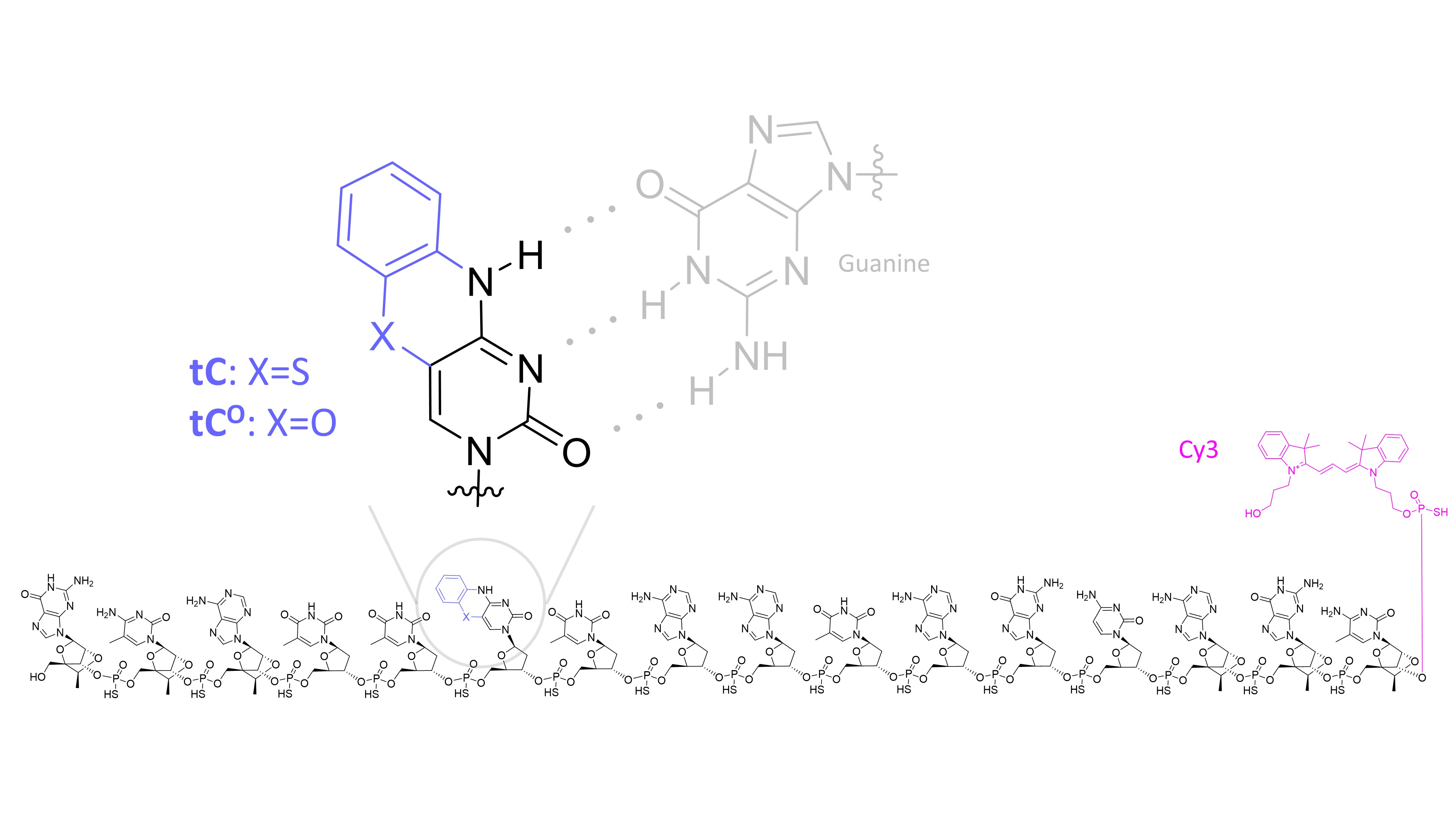 Figure 1. Fluorescent cytosine analogues tC or tCO inside the 16 nt ASO; the comparably small modification required to render the ASO fluorescent using these FBAs is shown in blue. For comparison, the conventional end-labelling approach, here using a Cy3 fluorophore (magenta), is also shown.

ASOs, which induce their pharmacological effect by first binding to their target RNA sequence via Watson-Crick base pairing, typically comprise several different types of base and/or backbone modifications and consequently behave differently than pure DNA and RNA. To investigate the potential of using FBAs to label oligonucleotide drugs, the Wilhelmsson lab recently explored the impact on RNA affinity, therapeutic efficacy, secondary structure, photophysical properties, and imageability upon incorporating tC and tCO (along with two other FBAs) at different positions in a 16mer ASO (Table 1).7

a All FBA nucleosides have deoxyribose sugars. b ΔTm for binding to the complementary RNA was determined relative to the unlabeled ASO (U: Tm = 65.5 °C, pEC50 = 5.7) and measured in 10 mM phosphate buffer (pH 7.4) containing 1.0 mM EDTA and 100 mM added salt.
c Knockdown efficiencies were evaluated using RT-qPCR in HEK 293 cells.

It was found that neither tCO nor tC, even when incorporated at three positions, affect the therapeutic efficacy of the ASO, as evidenced by the unchanged effective concentration for gene knockdown (ΔpEC50, Table 1). Similar non-perturbing properties have been demonstrated in a recent account on tCO inside mRNA, where it was shown that, in contrast to Cy5-labeling, substituting native cytosines for tCO does not impair the protein expression of the mRNA.8 Furthermore, the effect on the ASOs’ affinity towards its target RNA is small to non-existent (ΔTm, Table 1), with only a slight destabilization noted upon substituting one of the six flanking bases. The study also employed circular dichroism to show that the ASO:RNA duplex, as expected, adopts an A-form type duplex and that neither tC- nor tCO incorporation affects the secondary structure, which is crucial considering the mechanism of action for this class of therapeutics.

Knowing the photophysical properties of fluorophores in their oligomer environment is important for accurate interpretation of fluorescence-based data; this was therefore investigated for tC and tCO using steady-state and time-resolved spectroscopy (Figure 2). 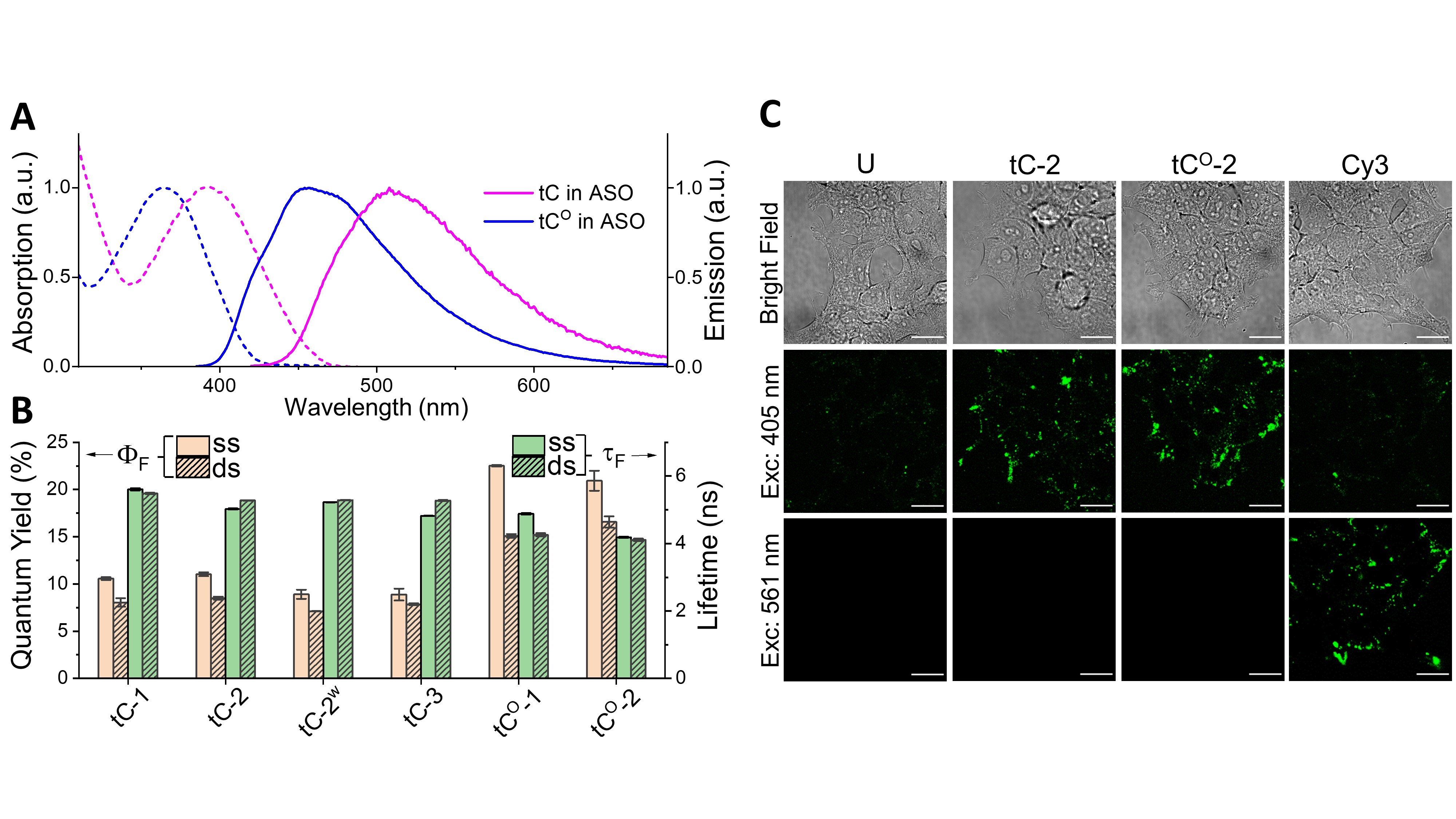 The absorption and emission spectra of tC and tCO inside the ASO (Figure 2A) are similar to those reported inside DNA4,5 and RNA3, and both FBAs are highly fluorescent, with an average quantum yield of 10% and 22% for tC and tCO, respectively (Figure 2B). The average fluorescence lifetimes are 5.2 ns and 4.6 ns for tC and tCO, respectively (Figure 2B), and exhibit bi- or mono-exponential decays. Overall, the photophysical properties of the FBAs are largely independent of substitution pattern in the investigated ASOs, and binding to RNA has a minor impact on these parameters. These robust characteristics greatly simplify interpretation when undertaking quantitative studies on, for instance, uptake in cells, which make both tC and tCO excellent choices for labeling ASOs. To further demonstrate the applicability of FBAs as fluorescent probes, the labeled ASOs were added to live cells and imaged using confocal microscopy (Figure 2C). The images clearly show that the FBA-ASOs are readily detected inside the cells using a conventional microscopy setup and that comparable results to the end-labelled Cy3-ASO can be achieved.

We conclude that the tC- and tCO phosphoramidite building blocks provided by Glen Research are bright and robust fluorophores that are highly suitable for fluorescence spectroscopy and microscopy investigations of therapeutic oligomers. The proven track record of these FBAs for studying DNA and RNA secondary structures using FRET methodologies9-11 also offers a unique potential for in-depth structure and dynamics investigations of ASOs and siRNA.

Glen Research offers a total of four tricyclic cytosine products tC, tCo, tCnitro and Ribo-tCo (Figure 1). Each of these nucleosides will form three hydrogen bond interactions with a complementary dG/G to give duplexes that are fairly unchanged in terms of stability relative to unmodified duplexes. tC and the tCo’s are fluorescent in both single- and double-stranded environments while tCnitro is virtually non-fluorescent under normal conditions. tCnitro can form a FRET pair with both tC and tCo, as detailed earlier.1

As Dr. Wilhelmsson has illustrated in his preceding article as well as many other publications, these modified nucleosides continue to be powerful tools for a wide range of applications. If you were not aware of them before, well, then you now have a new tool at your disposal for oligonucleotide fluorescence experiments.