Glen Research offers a wide range of dyes for the labeling of oligonucleotides, including but not limited to fluorescein, rhodamine and cyanine dyes. Of these, a large majority are available as either phosphoramidite or support-bound reagents that are used during solid phase oligonucleotide synthesis. This synthesis method is typically the most convenient way of preparing fluorescently-labeled oligonucleotides, but there are circumstances in which alternative methods are desirable, particularly for fluorophores that are more sensitive to basic oligonucleotide deprotection conditions.

If the fluorophore is not added during solid phase synthesis, it would need to be conjugated to the oligonucleotide by post-synthetic modification. This is commonly performed with one of two methods: NHS esters1 and click chemistry.2 The former involves reacting an excess of activated esters with amine-labeled oligonucleotides to form amide bonds, while the latter employs a cycloaddition of azido- and alkynyl-modified entities. Both methods can be very effective and high yielding, and Glen Research offers several reagents for each approach.

In the previous issue of the Glen Report, the utility of oligonucleotide NHS ester labeling was highlighted (GR32.26). To give our customers more options for fluorophore-labeling, we are adding four dyes to our NHS ester offerings: Fluorescein, ROX, sulfoCyanine 3 and sulfoCyanine 5 (Figure 1). Each of these dyes fluoresces in different regions of the visible spectrum (Table 1) and has been used extensively for the labeling of oligonucleotides, peptides, proteins and other amine-containing molecules/biomolecules. While fluorescein phosphoramidites are widely available, the other three can only be attached to oligonucleotides by post-synthetic modification. 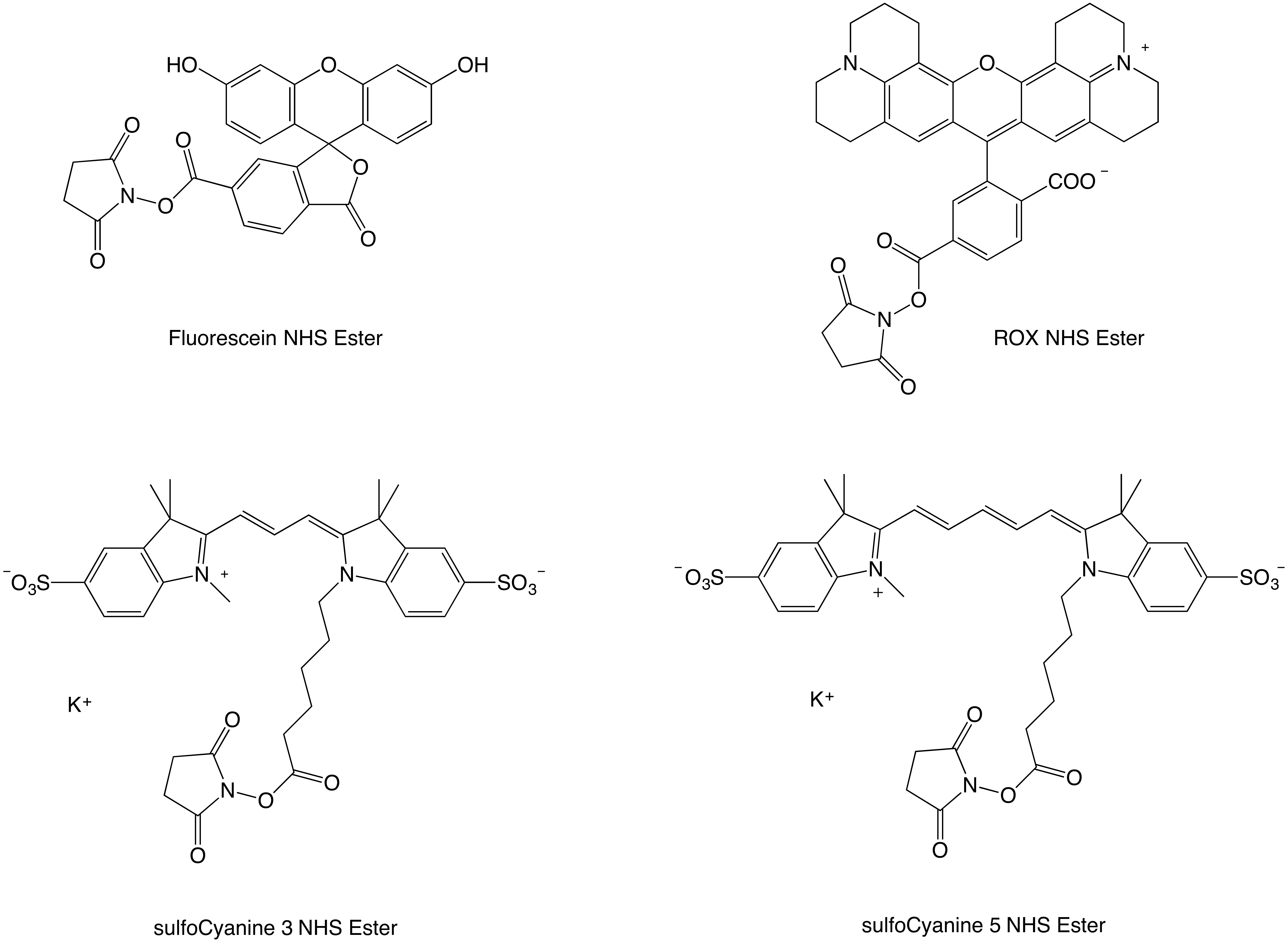 Fluorescein is a very important fluorophore. The carboxy form (FAM) is utilized for applications ranging from immunofluorescence to quantitative PCR, and it is especially popular for oligonucleotides, as evidenced by the twelve fluorescein products that we carry. Red-shifted versions of FAM, such as TET, HEX and JOE, can also be found in our catalog. Users of our fluorescein phosphoramidites and supports will know that methylamine can react with fluorescein to form a non-fluorescent impurity during oligonucleotide deprotection, as described in GR25.13. Although there is a workaround for this, the NHS ester approach (using the 6-FAM isomer) bypasses this issue altogether. When paired with a 5’-amino-modifier C6 (10-1906, 10-1907, 10-1916 or 10-1947), the resulting product would be identical to that generated with 5’-Fluorescein Phosphoramidite (10-5901). Likewise, the NHS ester paired with amino-modifier C6 dT (10-1039) will give exactly the same product as the one obtained with Fluorescein-dT Phosphoramidite (10-1056).

Alongside FAM, JOE and TAMRA, ROX is a rhodamine dye that has played a significant role in dideoxy Sanger sequencing. The dye itself is also commonly used as a passive reference dye for qPCR applications. ROX is not available as a phosphoramidite, and as such, the use of this NHS ester is the standard method of incorporating ROX into oligonucleotides. This NHS ester is being offered as the 6-isomer.

Cyanine 5 and 3 are popular indocyanine fluorophores that exhibit low, non-specific binding and relatively pH-independent fluorescence. For many years, Glen Research has been offering phosphoramidites and supports for these two dyes. With the addition of the NHS esters, customers will have another approach at their disposal. This can be particularly useful for cyanine 5, as it is one of the more deprotection sensitive dyes we offer. Unlike FAM NHS, these cyanine NHS esters do not match the structure of their phosphoramidite counterparts. The linker is different and each reagent contains 2 sulfonate substitutions directly on the indocyanine nuclei. The sulfonates make the dyes less susceptible to aggregation and do not significantly change their fluorescent properties. In the NHS ester form, sulfoCyanine dyes are highly soluble in water, giving users the option of not using DMF or DMSO to first dissolve the NHS ester.

Based on these results, the FAM NHS ester appeared to be relatively more difficult to couple. This could be because the NHS ester couples slower, is hydrolyzed faster or a combination of both. Regardless of the underlying cause, an NHS ester coupling can be and should be much closer to quantitative yield. As such, a subsequent set of FAM NHS ester labeling reactions was performed. The first was carried out as before, a second was carried out with 3-fold less volume of buffer and a third was reacted with 3-fold more equivalents of NHS ester. The results are summarized (Table 2).

Table 2. FAM NHS ester conjugation condition investigation. Each reaction used 6 % of a 1 μmol (~60 nmol) scale synthesis of 5’-amino-oligonucleotide. The buffer was sodium bicarbonate, pH 9, and the reaction volume is the sum of the oligo solution in buffer and the NHS ester in DMSO.

Reaction 1 was a repeat of the original evaluation, and the 87 % figure is consistent with the 85 % figure obtained earlier. As expected, using more NHS ester in reaction 3 helped to drive the label yield higher, but reducing the reaction volume in reaction 2 helped even more, giving quantitative labeling. By reducing the reaction volume 3-fold, the concentrations of both the NHS ester and the oligonucleotide were increased 3-fold. For a second order reaction, the reaction rate was effectively increased 9-fold. It should be pointed out that at higher concentrations, NHS esters will also hydrolyze more rapidly, but using smaller volumes is effective because the hydrolysis is essentially a first order reaction.

We are excited to provide our customers with additional options for obtaining fluorophore-labeled oligonucleotides. These NHS esters are very effective, and if any issues arise in terms of labeling yield for these or any other NHS esters, please consider reducing the reaction volume.