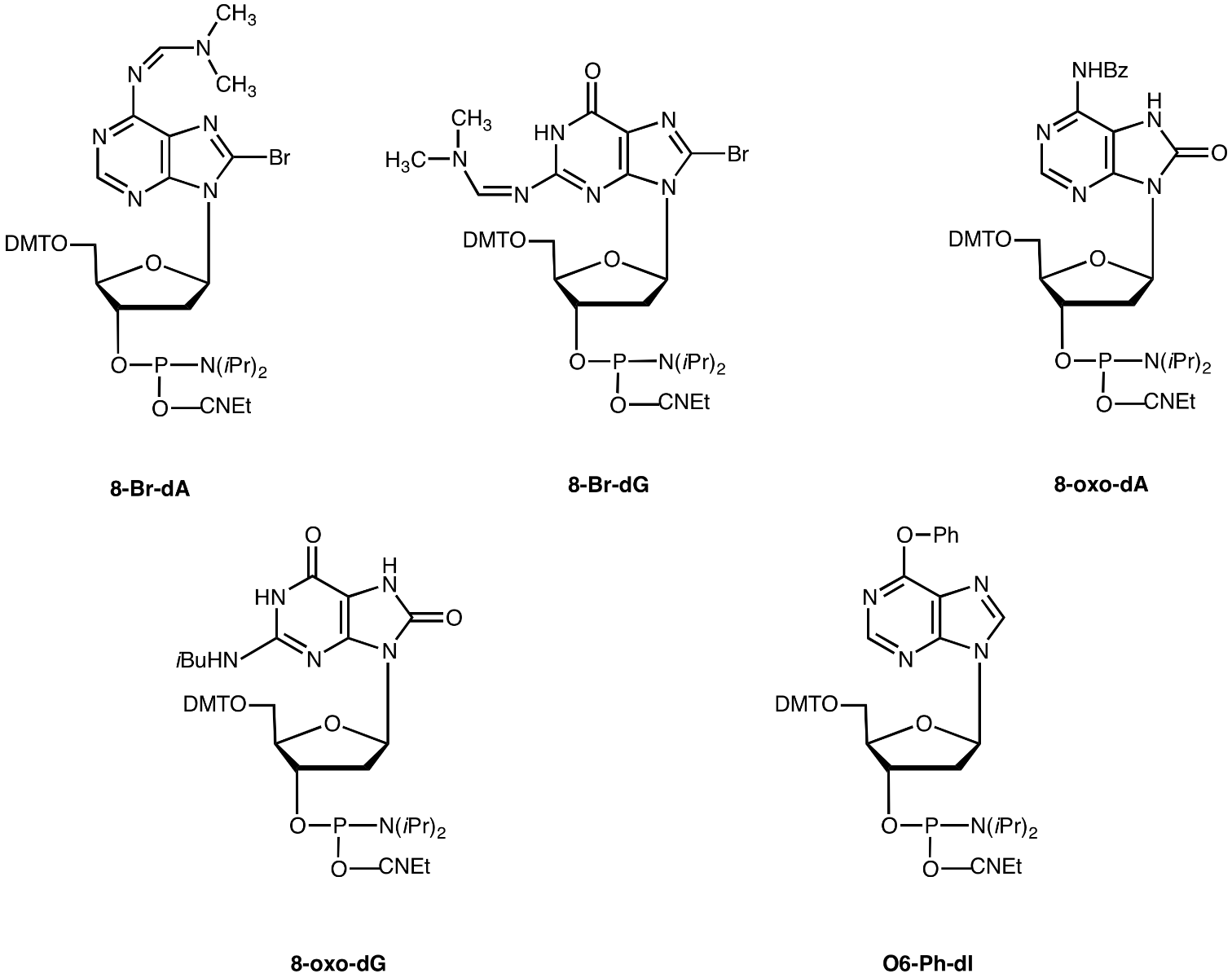 Photoactive bases may be used to probe the structure of protein-DNA complexes. Currently, photoactive analogues of dC and dT (5-bromo- and 5-iodo-dC and dU) are commercially available. However, photo cross-linking studies to examine base to amino acid contact pairs require all 4 bases to be available in photoactive form. We are now happy to introduce 8-Br-dA1 and 8-Br-dG as photoactive bases to complete the set of 4 commercially available bases. These halogenated bases are also suitable for X-ray crystallography studies

Please note that our studies on the stability of halogenated bases to ammonium hydroxide have led us to recommend the use of mild deprotection to avoid ammonolysis of the halogenated site. Our data indicate that this undesirable side reaction is virtually eliminated by carrying out the deprotection at room temperature for 24 hours.

Recently, there has been significant interest in the purine deoxynucleosides with an oxo group at the 8-position. This type of modification of DNA is formed naturally by oxidation or ionizing radiation. The resulting 8-oxo modification is significant in mutagenesis and ultimately carcinogenesis. To investigate this type of lesion in DNA, it is clearly desirable to have access to the 8-oxo-dA- and 8-oxo-dG-CE Phosphoramidite monomers which allow users to prepare oligonucleotides containing 8-oxo-dA2, 3 or 8-oxo-dG3 site specifically

With the unfortunate demise of Glen Research's Oligo Affinity Support, we are frequently asked to supply an alternative and we continue to test candidates. In the meantime, it is possible to produce a support for affinity purification by attaching an oligonucleotide amino-modified at the 5'- or 3'-terminus to an activated carboxy support like NHS-agarose. While this form of amino-modification is relatively convenient, it does not allow self ligation of double stranded DNA containing the desired restriction site. However, this may be accomplished using an oligonucleotide internally amino-modified with Amino-Modifier C6-dT or using O6-phenyl-2'-deoxyInosine (O6-Ph-dI). This latter compound, which should be thought of as a convertible dA, is modified after mild ammonium hydroxide deprotection with a suitable diamine in a post synthetic substitution reaction.4 The authors successfully substituted the convertible dA positions with 1,4-diaminobutane, annealed the complementary strand, and ligated the DNA to produce a duplex containing multiple amino residues. The DNA was then attached to NHS-Sepharose to form an affinity matrix. The high capacity affinity column so formed was used for the purification of transcription factor H2TF1 which had resisted purification attempts by conventional methods.