Late last year, Glen Research introduced an Acetyl protected dC (Ac-dC) monomer for oligonucleotide synthesis which allows UltraFAST (10 minutes versus the normal 6-7 hours) cleavage and deprotection. This simple but elegant modification of the standard protection scheme was developed by Beckman Instruments and patents are pending.1 With minimal change (replacement of benzoyl by acetyl for the dC monomer - other monomers remain unchanged) to the tried and true DNA monomer protection scheme, oligonucleotide synthesis proceeds normally. However, by using AMA (a 50:50 mixture of ammonium hydroxide and aqueous methylamine), the time-consuming cleavage and deprotection steps are reduced to a mere 10 minutes

Since the introduction of the UltraFAST system, we have been asked many questions which are worth reproducing here along with answers which illustrate why this deceptively simple concept is proving so valuable. 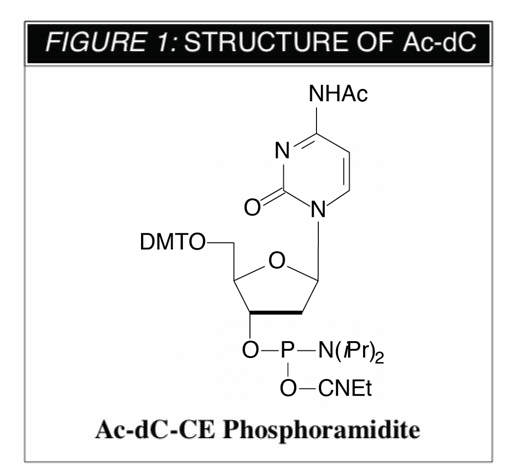 Is the replacement of the normal dC monomer with Ac-dC really the only change necessary?

Yes. The only change on the synthesizer is the substitution with the Ac-dC monomer. The other monomers remain unchanged. Of course, if the target oligonucleotide contains dC at the 3' terminus, an Ac-dC column must be used

What is AMA and how do I get it?

AMA contains strong ammonium hydroxide traditionally used for deprotection along with 40% aqueous methylamine which is available from Aldrich, Catalog No. M2,775-1. Prepare the AMA reagent by mixing equal volumes of the two reagents. (Caution: observe the recommended safety precautions provided by the suppliers.) The resulting AMA solution is stable and can be stored refrigerated in the same way as ammonium hydroxide

Can Ac-dC be used in situations where labile groups like fluorescein are in the oligonucleotide?

AMA is a very active reagent and potentially could damage sensitive molecules like fluorescein. However, the Ac-dC monomer is so versatile, it is completely compatible with traditional ammonium hydroxide deprotection. Indeed, if an expensive label or minor base has been included in the oligonucleotide, there is no need to risk your investment by using AMA. Simply use the standard ammonium hydroxide deprotection

Can long oligos be produced using this chemistry?

Ac-dC couples with an efficiency at least as high as the normal Bz-dC monomer, so long oligos can be readily prepared. Although there is no evidence that AMA causes base modification at a level which may prove to be significant in oligos greater than 50mer, it would again seem unwise to take the risk. The Ac-dC protection is completely compatible with ammonium hydroxide deprotection so why risk problems in later time-consuming experiments? Can the AMA reagent be put on the synthesizer for automated cleavage?

The only incompatibility known for the AMA reagent is with rubber which may be weakened or swell. Vials which use rubber O-rings to seal and syringes with rubber plunger seals should not be used. The components of a DNA synthesizer which contact the reagents should be unharmed by AMA even on extended use. If the AMA reagent is attached to the synthesizer, the cleavage time may be reduced to 5 minutes

Expedite monomers from Biosearch also can be cleaved and deprotected in 15 minutes, what are the differences between these two new techniques?

A "fair" comparison is shown in Table 1. The assertion by Biosearch that oligos prepared using Expediteª monomers can be cleaved and deprotected in 15 minutes is accurate only if the user opens the column and exposes the support matrix directly to the deprotection reagent. This may be easy for the membrane based columns which can be opened to allow the membrane to be directly deprotected. However, to break open the aluminum seals on the Biosearch CPG columns prior to heating the CPG support in ammonium hydroxide is no easy task. This process leads to a product containing silica which must be, at least, desalted prior to use. A separate on-column cleavage step takes 45 minutes 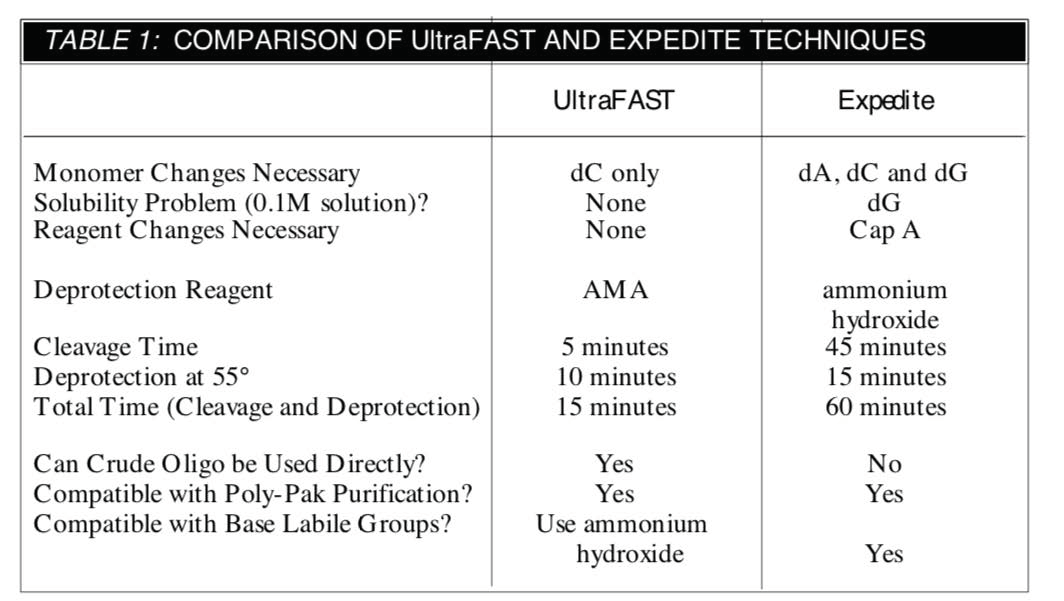 Can the unpurified oligonucleotide be used directly for PCR or sequencing?

The crude oligonucleotide isolated by evaporating the AMA reagent dissolves completely in aqueous solution and can be used directly. This contrasts with the crude oligonucleotide produced by Expedite chemistry which contains t-butyl-phenoxyacetamide which is not water-soluble and requires a centrifugation step before use. Significant product loss has also been reported to occur

Do any other reagents need to be changed?

The standard synthesis reagents are appropriate for UltraFAST chemistry, with the exception of the Ac-dC monomer change. Again, this contrasts with Expedite chemistry which requires an alternative capping reagent, and a change in the dA, dC and dG monomers

How and why does this UltraFast chemistry work? 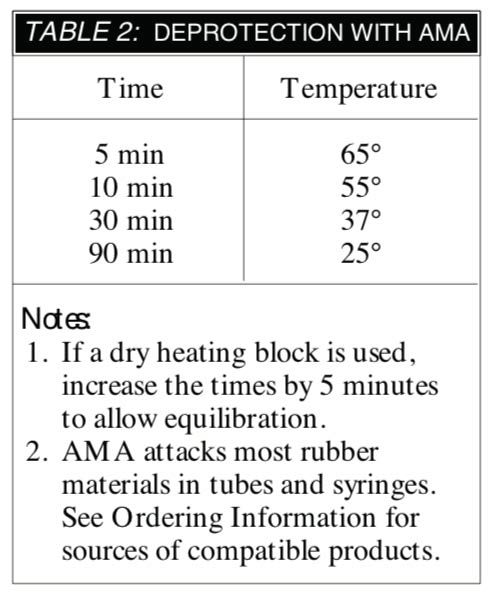 AMA is an aggressive base which is much more reactive than ammonium hydroxide alone. The cleavage of the oligonucleotide from the support is simply speeded up, reducing the reaction time from 45 minutes to 5 minutes. However, the critical aspect is in the rate of hydrolysis of the base protecting groups. The acetyl group on the dC residues is hydrolyzed almost instantaneously, followed by the benzoyl groups from dA sites, and slowest, the iBu groups from the dG sites. The significance of the UltraFAST hydrolysis of the acetyl group from the dC sites is illustrated in Figure 2 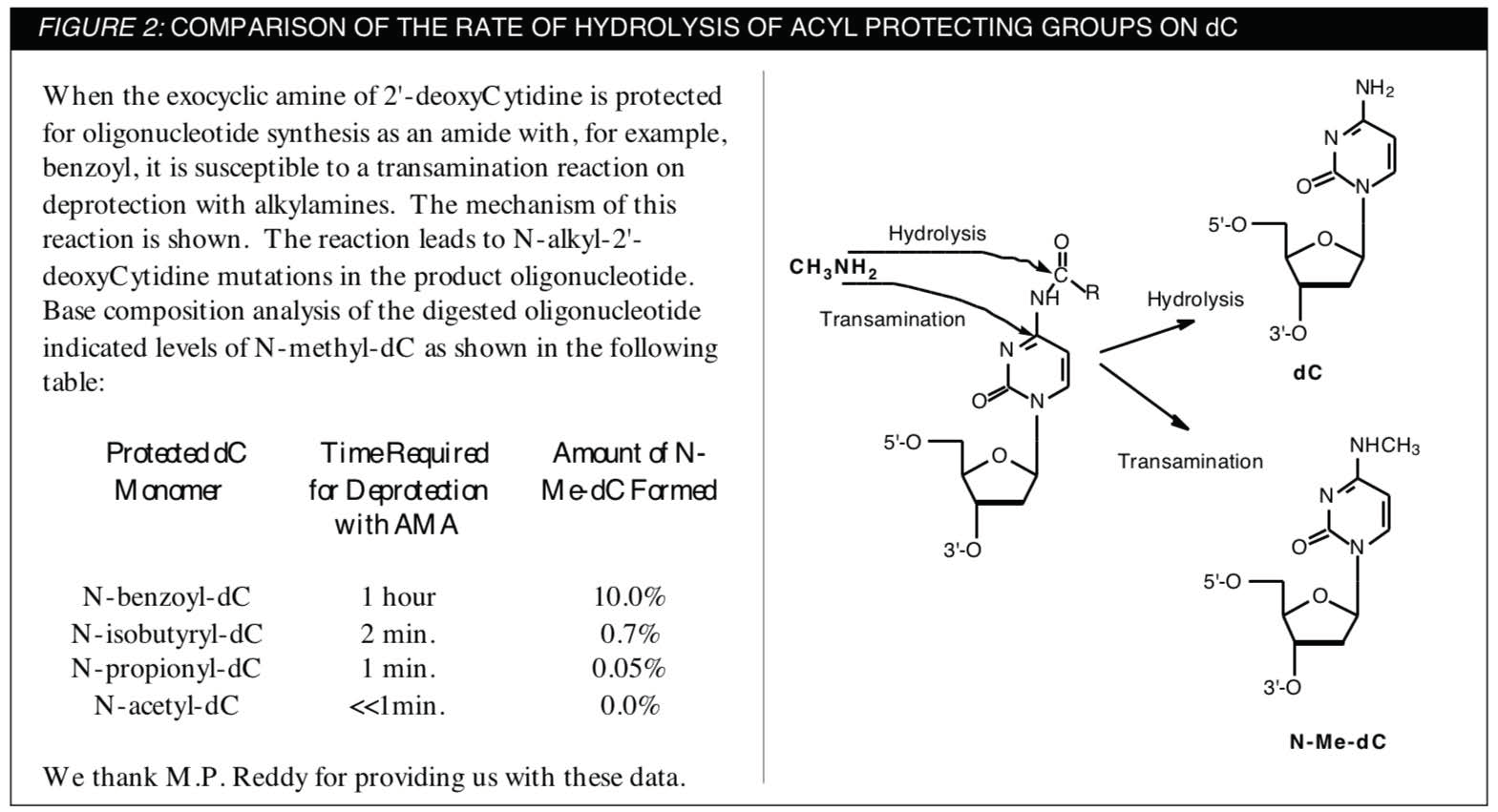 Where can compatible deprotection tubes be purchased?

In the previous Glen Report, these tubes were incorrectly sourced. The catalog number was correct but the supplier is Rainin

The C5-propynyl-2'-OMe-CE Phosphoramidites have been discontinued.