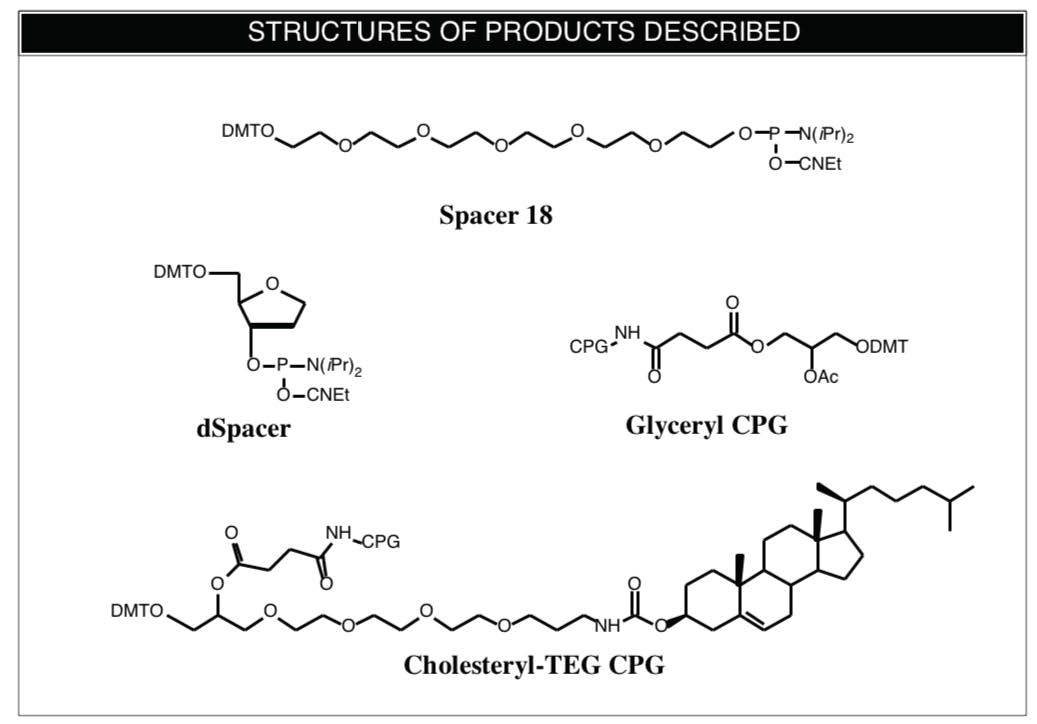 Abasic sites in DNA are generated chemically or enzymatically by selective hydrolysis of the glycosidic linkage. The resulting apurinic/apyrimidinic sites lack coding information and lead to mis-incorporation of bases by polymerases and may play an important role in mutagenesis. Abasic sites are rather unstable and are susceptible to §-elimination causing chain scission. The instability of the natural abasic site can be eliminated by the substitution of a tetrahydrofuran derivative3,4 with a methylene group modifying the 1 position of 2'-deoxyribose. The CE phosphor-amidite of the tetrahydrofuran derivative is offered as a new spacer phosphoramidite which we have named dSpacer .

A support has been described5 for the preparation of oligonucleotides with a 3'-phosphoglyceryl terminus. The terminus is readily oxidized by sodium periodate to form a 3'-phospho-glycaldehyde. The aldehyde may be further oxidized to the corresponding carboxylic acid. Either the aldehyde or the carboxylate may be used for subsequent conjugation to amine- containing products. The authors were specifically interested in the products from the radical cleavage of oligonucleotides by DNA targeting molecules like bleomycin, enediyne antibiotics and transition metal complexes.

Cholesteryl conjugated oligo-nucleotides have been the subject of substantial interest in antisense and other studies due to the lipophilicity and ready availability of cholesterol. Cholesteryl CE phosphoramidites tend to be rather insoluble in acetonitrile, making them inconvenient to use in automated synthesis. Even our cholesteryl-TEG phosphoramidite has to be dissolved in 5% THF in acetonitrile. A simple solution is to use a support with cholesterol attached as was described recently.6 The authors started with our 3'-amino-modifier C7-CPG, removed the Fmoc protecting group with DBU in acetonitrile, and conjugated the resulting amine with cholesteryl chloroformate. We offer cholesteryl-TEG CPG as a more direct solution

Note: Supplementary information is available on these items on request.