The ability to produce oligonucleotides containing modified bases has stimulated research in a variety of areas, including carcinogenesis studies, investigation of DNA and RNA activity, and especially research into protein - DNA interaction. As most researchers are aware, Glen Research offers a wide variety of minor and modified base CE phosphoramidites which are introduced into oligonucleotides directly during synthesis. However, to satisfy an even wider group of research activities, we are now offering synthons for purine derivatives modified at the 6-position and pyrimidines modified at the 4-position. These synthons have been termed "Convertible Nucleosides"1, and the process has been referred to as "Post-Synthetic Substitution"2. 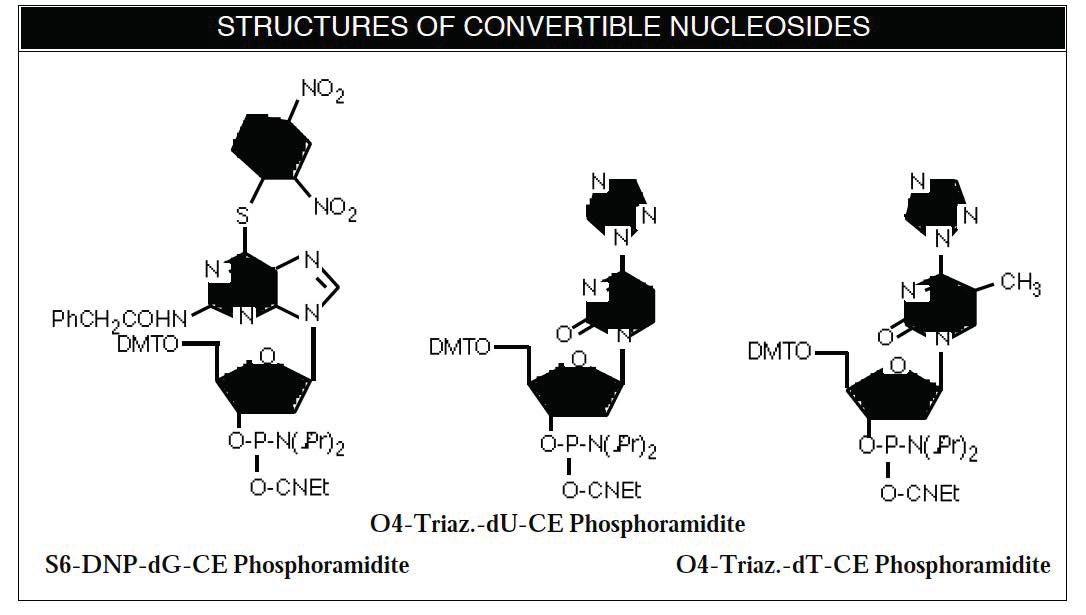 Several schemes have been applied to the production of convertible pyrimidine deoxynucleosides but fewer choices are available for purine modification. A recent article3 describes the use of 6-O-(pentafluorophenyl)-2'-deoxyguanosine as a versatile synthon for the production of oligonucleotides containing purine residues modified at the 6-position with N and O derivatives. This route is not applicable to the formation of 6-thioguanine derivatives which are interesting in medical research since 6-thioguanine has been used for many years as an anti-leukemia drug. Two groups have recently reported4,5 the preparation of 6-thio-dG monomers for DNA synthesis with S6-cyanoethyl protection.

A more versatile synthon has been described2 which allows the preparation of guanine derivatives modified at the 6-position with S, N and O derivatives by post-synthetic substitution. This convertible nucleoside, a derivative of 6-(2,4-dinitrophenyl)-thio-2'-deoxyGuanosine (S6-DNP-dG), gives ready access to oligonucleotides containing: thioguanine for use in medical studies and for DNA structural research; 2,6-diaminopurine also for DNA structural research since it forms an additional hydrogen bond to T, thereby enhancing duplex stability; O6-alkyl derivatives for carcinogenesis studies; and 13C, 15N and 17O labels for NMR experiments. The protecting group chosen by the authors for the N2 position (phenylacetyl) is very base-labile and removes some of the problems encountered in the past with the slow removal of isobutyryl from that position in 6-substituted purine derivatives.

The authors2 recommend a coupling time of 3 minutes for the CE phosphoramidite of S6-DNP-dG. In our hands, a coupling time of 1 minute was sufficient to obtain >99% coupling efficiency. The general synthetic scheme for carrying out these substitutions is shown in Figure 1.

Deprotect the oligonucleotide with 10% mercaptoethanol in concentrated ammonium hydroxide for 48h at room temperature.

Deprotect the oligonucleotide with 40% aqueous methylamine for 48h at room temperature.

Deprotect the oligonucleotide with a solution of 10% v/v 1,8-diazabicyclo[5.4.0]undec-7-ene (DBU) in anhydrous methanol for 48h at room temperature in the dark. Lyophilize the solution to an oil and dissolve the oil in 10mM aqueous sodium hydroxide.

Deprotect the oligonucleotide with a solution of 0.5M aqueous sodium hydroxide for 48h at room temperature.

Modification of pyrimidine bases has been predominantly carried out prior to the preparation of the phosphoramidite for oligonucleotide synthesis. This necessitates the preparation of a variety of monomers some of which can be quite tricky to handle. The alternative post-synthetic substitution strategy is equally valid for pyrimidine bases and has been described1 for a convertible nucleoside, 4-O-(2,4,6-trimethyl-phenyl)- 2'-deoxyuridine (TMP-dU). TMP-dU was successfully used for the addition of a variety of functionalized amino derivatives to the final oligonucleotide. In this way, the authors were able to introduce the following functionalities to the oligonucleotide: amine, disulfide, thiol, and carboxyl groups. Oligonucleotides containing 4-thio-pyrimidine nucleosides have been prepared from monomers containing a variety of protecting groups for the 4-thio residue including cyanoethyl6,7, pivaloyloxymethyl8, and nitrophenylethyl9.

A more universal approach to pyrimidine modification has been suggested10 in which the 4-position is modified by a triazolyl group. This substitution with a triazolyl group was previously known but the addition of the conversion to the 4-thio derivative makes this synthon much more versatile. Although these procedures were described for thymidine, it is likely to be equally applicable to other pyrimidine nucleosides. These triazolyl pyrimidine convertible nucleosides allow oligonucleotides to be produced containing: 4-thio derivatives for cross linking reactions; 4-amino derivatives for DNA structural research; O4-alkyl derivatives for carcinogenesis studies; and offer the potential for the introduction of 13C, 15N and 17O labels for NMR experiments.

The Convertible dT and dU-CE phosphoramidites couple to the same extent and with the same coupling time as normal monomers. The general synthetic scheme for carrying out these substitutions on the Thymidine derivative is shown in Figure 2. The authors10 recommend the use of a mild deprotection scheme or monomers with base-labile protection for these modified oligonucleotides to avoid unwanted hydrolysis at the modified sites. 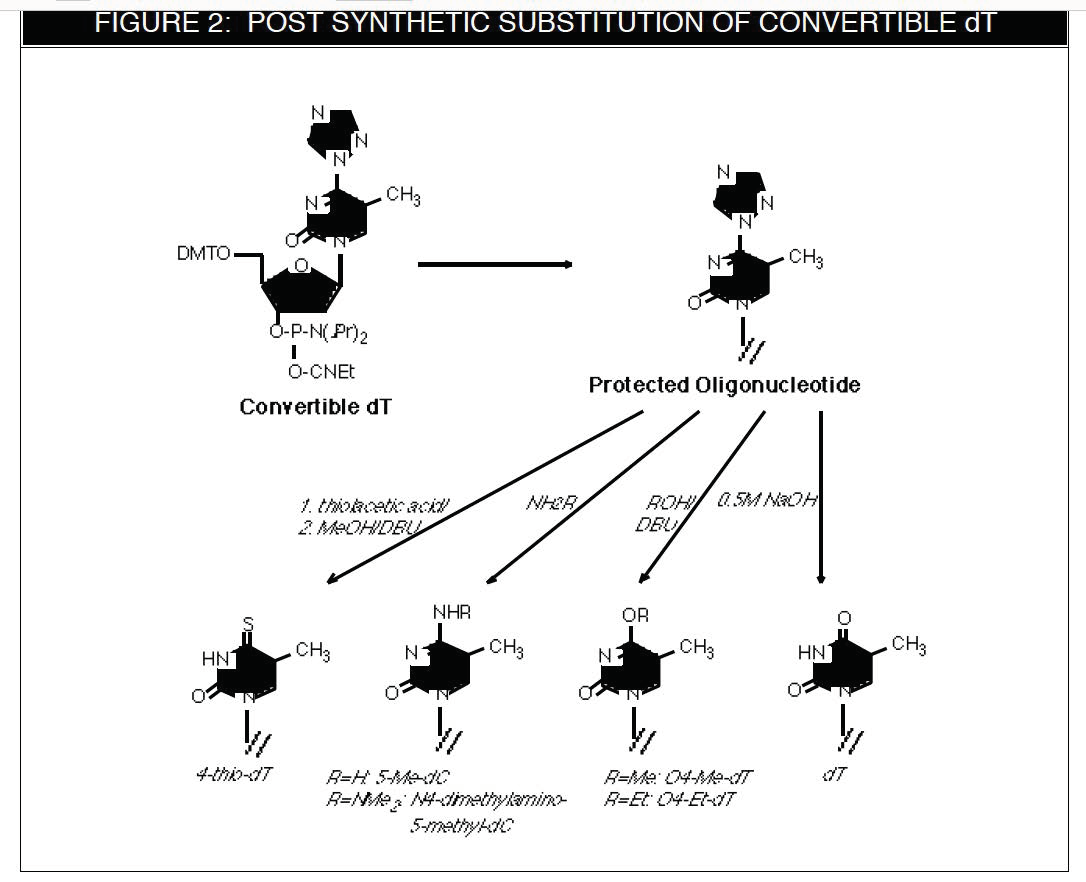 Deprotect the oligonucleotide on the support with 10% thiolacetic acid in acetonitrile for 24h at room temperature. Wash the reagents from the column with acetonitrile and deprotect with 10% DBU in anhydrous methanol for 16h at room temperature in the dark. (This avoids hydrolysis of the thio group with ammonia.) Lyophilize the solution to an oil and dissolve the oil in 10mM aqueous sodium hydroxide prior to purification.

Deprotect the oligonucleotide with concentrated ammonium hydroxide for 24h at room temperature.

Deprotect the oligonucleotide with a solution of 10% v/v DBU in anhydrous methanol for 24h or in anhydrous ethanol for 48h at room temperature in the dark. Lyophilize the solution to an oil and dissolve the oil in 10mM aqueous sodium hydroxide.

Deprotect the oligonucleotide with a solution of 0.5M aqueous sodium hydroxide for 24h at room temperature.

Purification and isolation of the modified oligonucleotides can be carried out using standard procedures. We prefer to carry out the oligonucleotide synthesis DMT-ON, deprotect as described, dilute the organic content to <5% with water, and follow the standard Poly-Pak purification scheme. Base composition analysis10 should be carried out to confirm the presence of the desired modified nucleoside.

We wish to thank Dr. Y.Z. Xu for his help and encouragement in commercializing these useful products. The original research was funded by Cancer Research Campaign (U.K.) and this support is gratefully acknowledged.