Oligonucleotide synthesis is routinely carried out from the 3' to the 5' terminus for no other reason than the ease of synthesis of the monomer units. The 5'-hydroxyl group, a primary hydroxyl, is significantly more reactive than the secondary 3'-hydroxyl (or 2'-hydroxyl) group, making it straightforward to protect with the DMT group and leaving the 3'-hydroxyl available to form the phosphoramidite. However, a few situations make it necessary to synthesize oligonucleotides in the opposite sense.

Oligonucleotides containing a hairpin loop are used routinely for structural studies of duplex formation. The hairpin loop allows the oligonucleotide to bend back on itself thereby forming a duplex in an antiparallel format. The hairpin may be nucleosidic or it may consist of a polyethylene glycol spacer1. By using 5'-phosphor-amidites for part of the synthesis, oligos with hairpin loops can be formed in which the strands are parallel2. These parallel stranded oligos can be readily prepared with 5'--3' or 3'--5' sense (Figure 1). 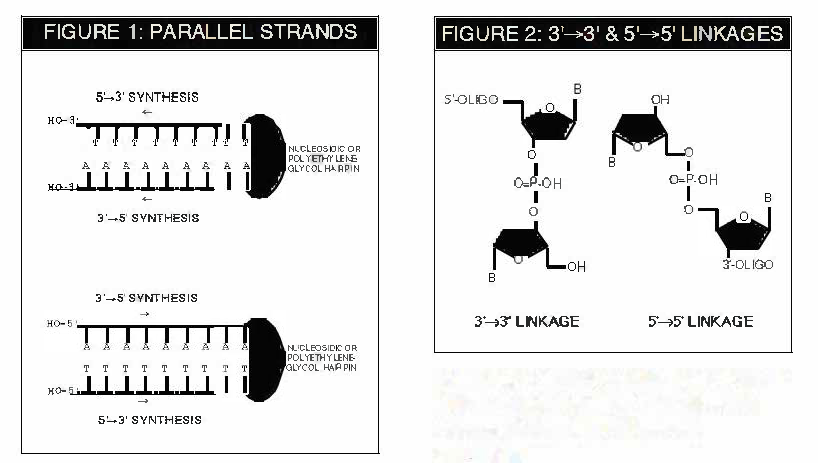 The design of antisense oligo-nucleotides as therapeutics has stimulated significant research activity on backbone modification. Modifying the natural phosphodiester linkage is essential to protect the oligonucleotide from intracellular nuclease degradation. The structural variety of these backbone modifications is diverse and they will not be detailed here. However, an interesting addition to the protection of antisense oligonucleotides is to modify the terminal linkages from the natural 3'-5' to 3'-3' and/or 5'-5' linkages. In this way, the oligonucleotides are protected against exonuclease activity, especially 3'-exonuclease activity which is by far the most significant enzymatic degradation route. Moreover, once degradation has occurred, the products are normal nucleosides with no toxicity concerns. Although this strategy has been applied successfully3 to the protection of internal linkages using alternating a,b nucleosides to maintain effective hybridization, the most simple strategy is to modify only the linkage at the 3' terminus4. This is conveniently carried out as shown in Figure 2 and results in effective resistance with minimal disruption of hybridization.

Other areas where synthesis in the opposite sense may be of interest would be:
i) The preparation of oligos containing a base at the 3' terminus which is unsuitable for attachment to CPG, e.g., 2',3'-ddT and ddI.
ii) The synthesis of oligonucleotides on a support using a non-hydrolyzable linkage such that the 3' terminus is then available for polymerase extension. 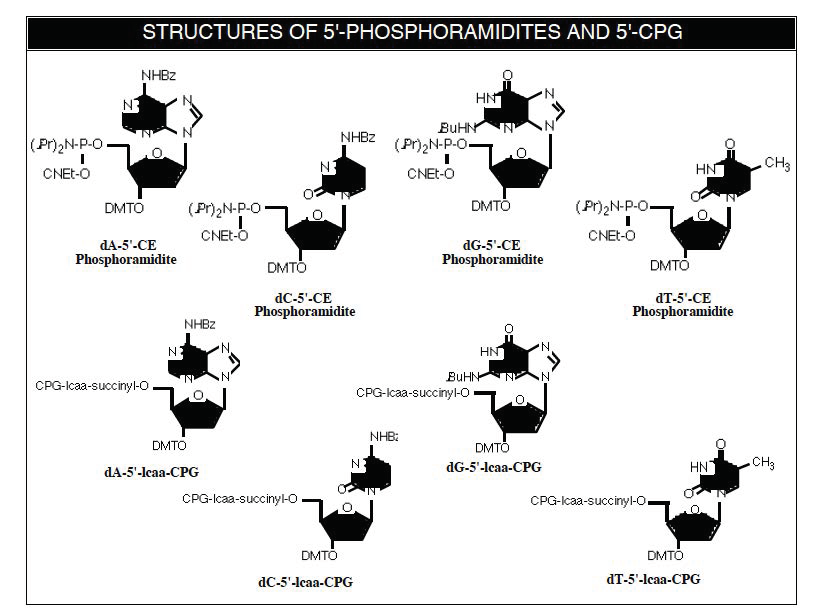