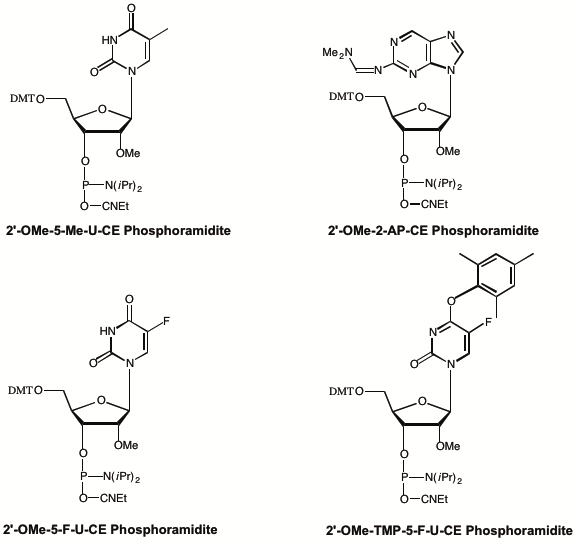 In the last year, oligonucleotides containing 2'-OMe-RNA linkages have been examined in a variety of circumstances which exploit their enhanced RNase and DNase resistance and the increased thermal stability of their duplexes and triplexes. Some potentially very interesting results have been generated in the fields of antisense, triplex and ribozyme research. Their RNase and DNase resistance was exploited in experiments demonstrating the effective incorporation of 2'-OMe RNA into liposomes through cholesteryl modification1. This resistance was also used to protect ribozymes from hydrolysis by converting the regions flanking the hammerheads to 2'-OMe linkages. Surprisingly, this modification also served to increase the ribozyme activity of the hybrid oligonucleotide2.

One area of particular interest has been the formation of triple helices which are strongly stabilized by 2'-OMe-RNA relative to DNA sequences. Further modification of these triplex structures with intercalating or cleavage reagents3 may offer great potential in therapeutic development.

To aid in the evaluation of structural analyses of complexes containing 2'-OMe-RNA sequences, we are introducing the following CE phosphoramidites:
2'-OMe-5-Methyluridine (2'-OMe-T)4 for triplex studies; 2'-OMe-2-aminopurine for ribozyme5 and protein interaction studies; and 2'-OMe-5-F-C (by post-synthetic substitution with ammonia) and 2'-OMe-5-F-U for structural studies.

As the scale of synthesis of the four normal 2'-OMe-RNA monomers grows, we are able to offer an improvement in cost which we are delighted to pass on to researchers. Effective June 1 1993, therefore, we are lowering their prices as shown. They are still not inexpensive but we hope this price reduction will give researchers better access to these exciting RNA derivatives.