MGB Eclipse® pairs a minor groove binding (MGB) tripeptide with a dark quencher. The MGB significantly enhances hybridization, while the Eclipse® has a broad absorption range that quenches many of the most common fluorophores, including FAM, HEX, TET and Yakima Yellow®. Together, MGB Eclipse® is an attractive group for the synthesis of hydrolysis probes, the most common probe detection method for qPCR.

Otherwise known as MGB TaqMan®, TaqMan® MGB and TaqMan® MGB-NFQ probes, MGB Eclipse® hydrolysis probes are effective and have been widely used for close to twenty years. They work in the same way as traditional TaqMan® probes. 5’-Fluorophore and 3’-quencher dual-labeled short oligonucleotide probes complementary to the DNA targets are degraded by Taq DNA polymerase during the primer extension portions of PCR, which results in a linear relationship between fluorescence and amplified PCR product. With the additional MGB, melting temperatures are notably increased, allowing probes of shorter length. This is particularly attractive for mismatch discrimination.1

MGB Eclipse® hydrolysis probes have been used in a wide range of applications, including pathogen detection, SNP detection, viral load quantification and mutation detection. These probes continue to be popular.2 Using RT-qPCR, MGB Eclipse® hydrolysis probes were recently used to quantify the transcripts of three different proteins to understand how the presence of a common gut bacterium influences porcine immune cells.3 In another investigation, similar probes were used to study cell free amounts of three mitochondrial gene fragments in the serum of patients who had suffered aneurysmal subarachnoid hemorrhage, a type of stroke.4 This study investigated the relationship of these gene fragment concentrations with post hemorrhage complications and clinical outcomes. In a third recent publication, these probes were used to detect a mutation of epidermal growth factor receptor (EGFR) associated with lung cancer.5 The MGB Eclipse® hydrolysis probe was used in a 6-color digital PCR assay for the monitoring of EGFR mutations. In the first two studies, MGB Eclipse® was paired with FAM, and in the third study, MGB Eclipse® was paired with ROX.

In GR29.1, we introduced 3'-CDPI3 MGB™ CPG that allowed researchers to take advantage of the unique properties of this modification. When MGB at the 3’-position is used with Eclipse® Quencher Phosphoramidite at the penultimate position, a functional MGB Eclipse® for probe synthesis is created. This is an approach that some customers have been employing. However, having an already assembled MGB Eclipse® support would be more straightforward and match the standard MGB Eclipse® structure used in qPCR probes. Glen Research is excited to share that an MGB Eclipse® CPG is now available to our customers. 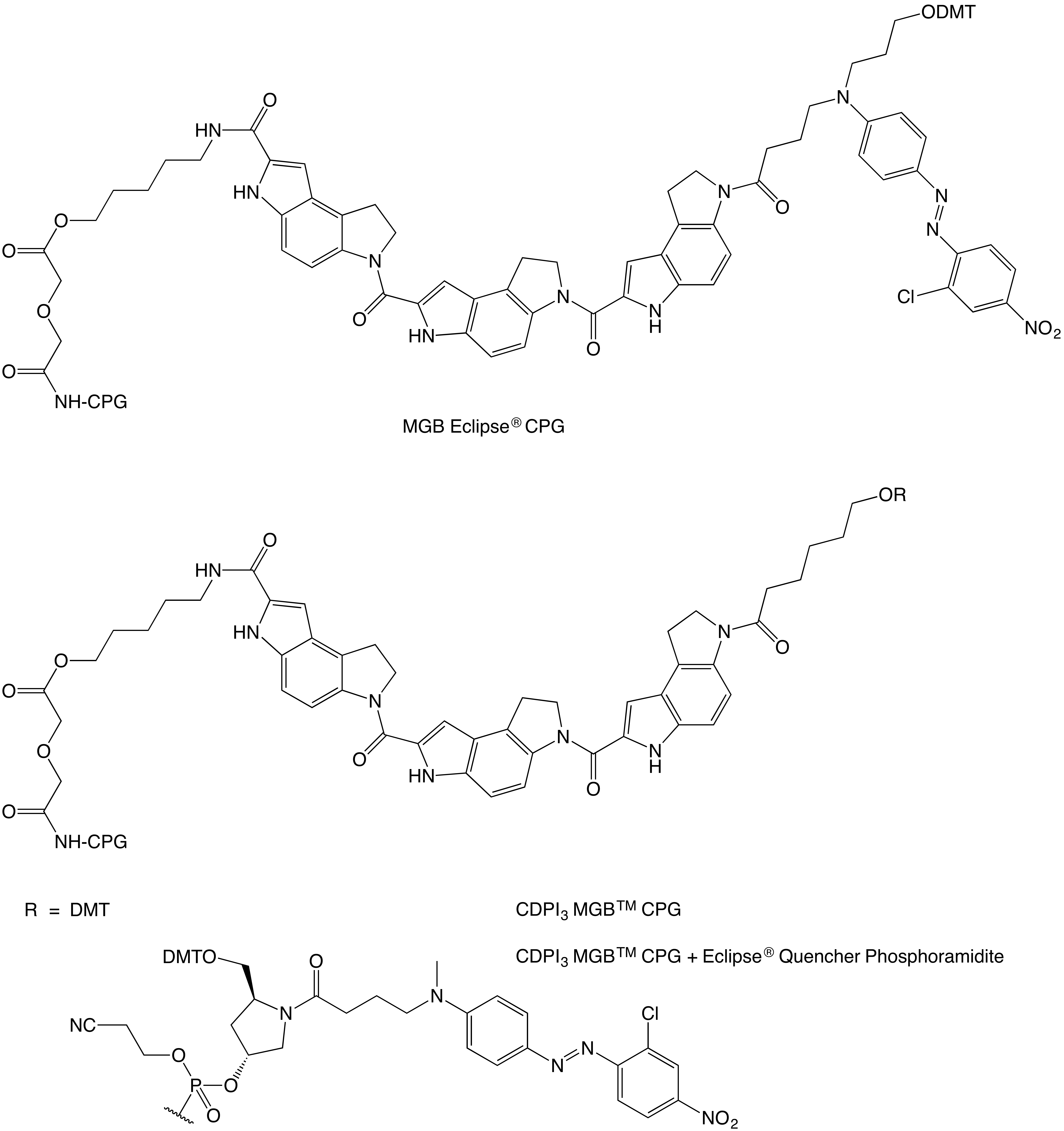 The structure of the MGB Eclipse® CPG is very close to that of the 3'-CDPI3 MGB™ CPG (Figure 1). The only difference is that the linker between the tripeptide and the DMT is increased in length by 2 atoms to accommodate a branched position for the quencher. As a combination of two modifications, MGB Eclipse® exhibits spectral properties that retain the absorbances of both of its two components (Figure 2). The absorbance maximum of the MGB is red-shifted from 340 to 342 nm, while the absorbance maximum of the Eclipse is red-shifted from 530 to 545 nm. The Eclipse absorbs in the approximate range of 400 to 640 nm, but it should be noted that MGB Eclipse will work with far red-emitting chromophores as well. 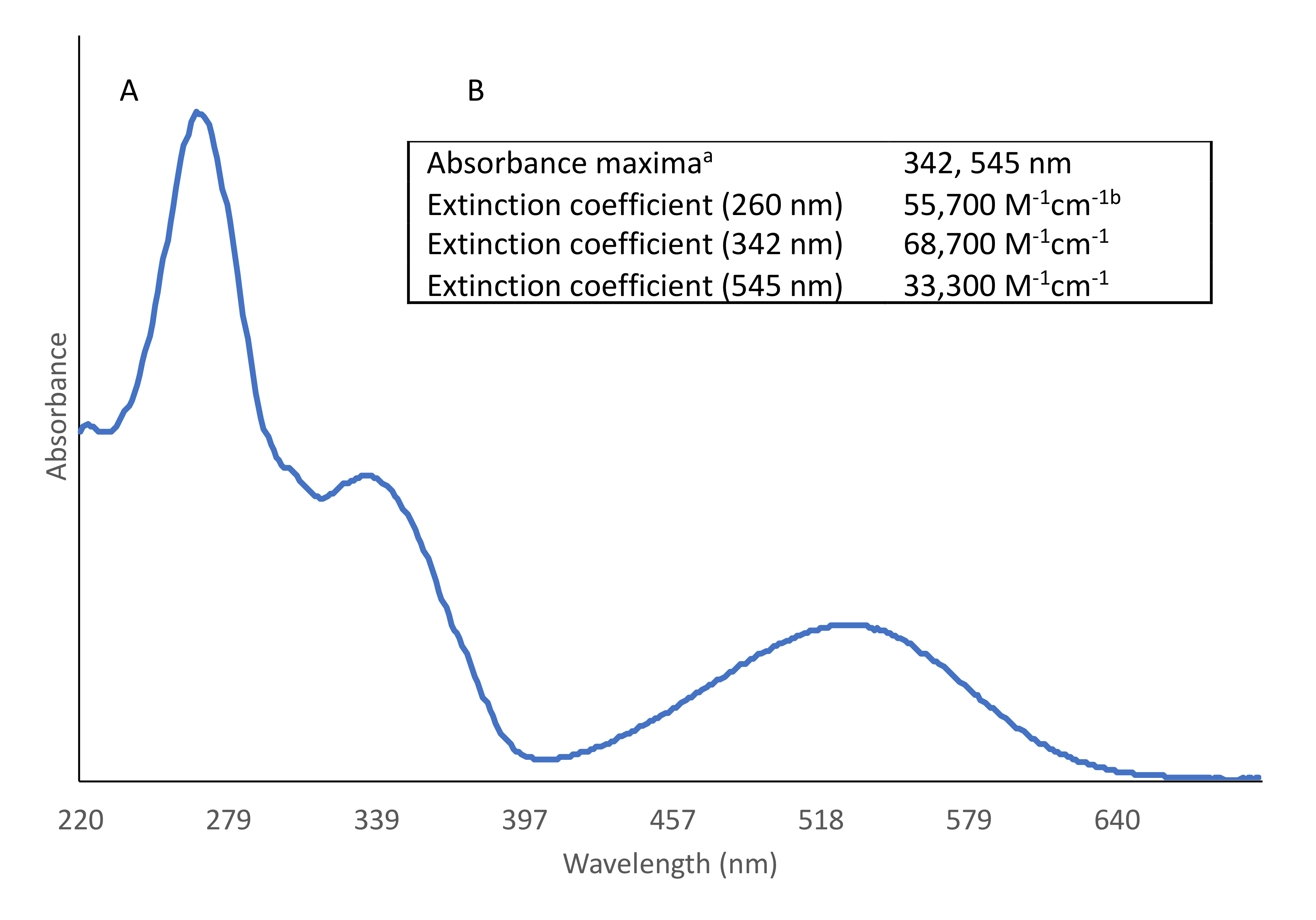 Since the Eclipse® quencher is highly stable and safe to all standard deprotection methods, the MGB portion dictates the conditions of synthesis and deprotection. Similar to the use of 3'-CDPI3 CPG, UltraMild synthesis and CSO oxidation are recommended in order to achieve the best results. If standard monomers and iodine oxidation are used, acceptable results can be obtained when deprotection is performed in NH4OH/EtOH 3:1 (v/v) for 17 hr at 55 °C.

To better understand the behavior of MGB Eclipse® under deprotection conditions, additional tests were performed. A poly-T sequence was synthesized on the MGB Eclipse® CPG using CSO oxidation, and the deprotection was carried out with ammonium hydroxide in three different environments: room temperature for 2 hours (UltraMild), room temperature for 17 hours, and 55 °C for 17 hours (Figure 3). These conditions simulate what would be required to deprotect iPr-Pac-dG, dmf-dG and ibu-dG, respectively. As expected, UltraMild deprotection looked relatively good. When the deprotection was extended overnight, oligonucleotide quality was not reduced significantly. However, this did not hold true when the reaction was incubated at 55 °C overnight. Prolonged heating in ammonium hydroxide clearly damages the MGB Eclipse® and should be avoided. Based on these results, the use of dmf-dG and CSO oxidation is another viable alternative for producing MGB Eclipse® oligonucleotides of good quality. 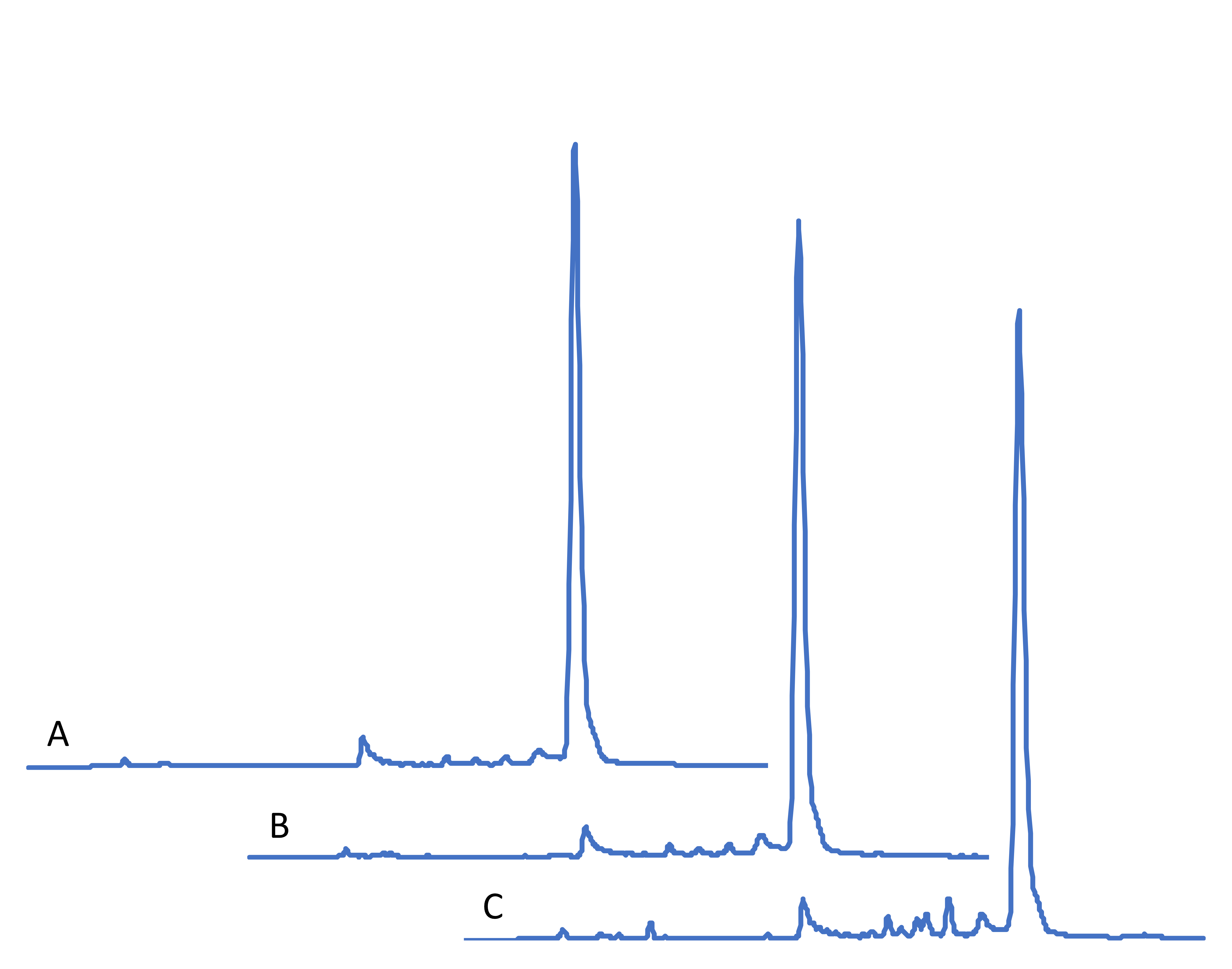 MGB Eclipse® is an excellent modification for qPCR probes. By providing the CPG for this modification, our customers will now have a more standard and readily accessible tool in designing qPCR assays for existing and future needs.

TaqMan® is a registered trademark of Roche Molecular Systems that is licensed exclusively to Applied Biosystems Inc. for use in certain non-diagnostics field.

Eclipse® is a registered trademark of ELITechGroup® Inc.

This product is sold under licensing arrangements between ELITechGroup Inc. and Glen Research. The purchase price of this product includes limited, nontransferable rights to use the product solely for activities of the purchaser which are directly related to human diagnostics. Other uses, including incorporation of the product into another commercial product, are prohibited without additional license rights. For information on purchasing a license to this product for purposes other than those stated above, contact:

This limited license permits the person or legal entity to which this product has been provided to use the product, and the data generated by use of the product, only for human diagnostics. Neither ELITechGroup Inc. nor its licensors grants any other licenses, expressed or implied for any other purposes.