Oligonucleotides with selectively cleavable linkages are desirable for many applications. These linkages have been used for mass spectrometry-facilitated transcriptome analysis,1 release of therapeutic oligonucleotides,2 massive structural rearrangement of DNA nanostructures,3 blocked cleavable primers4 and biomarker discovery.5 Glen Research offers several products that can be used in these applications, and they fall into four categories based on the mechanism of cleavage. 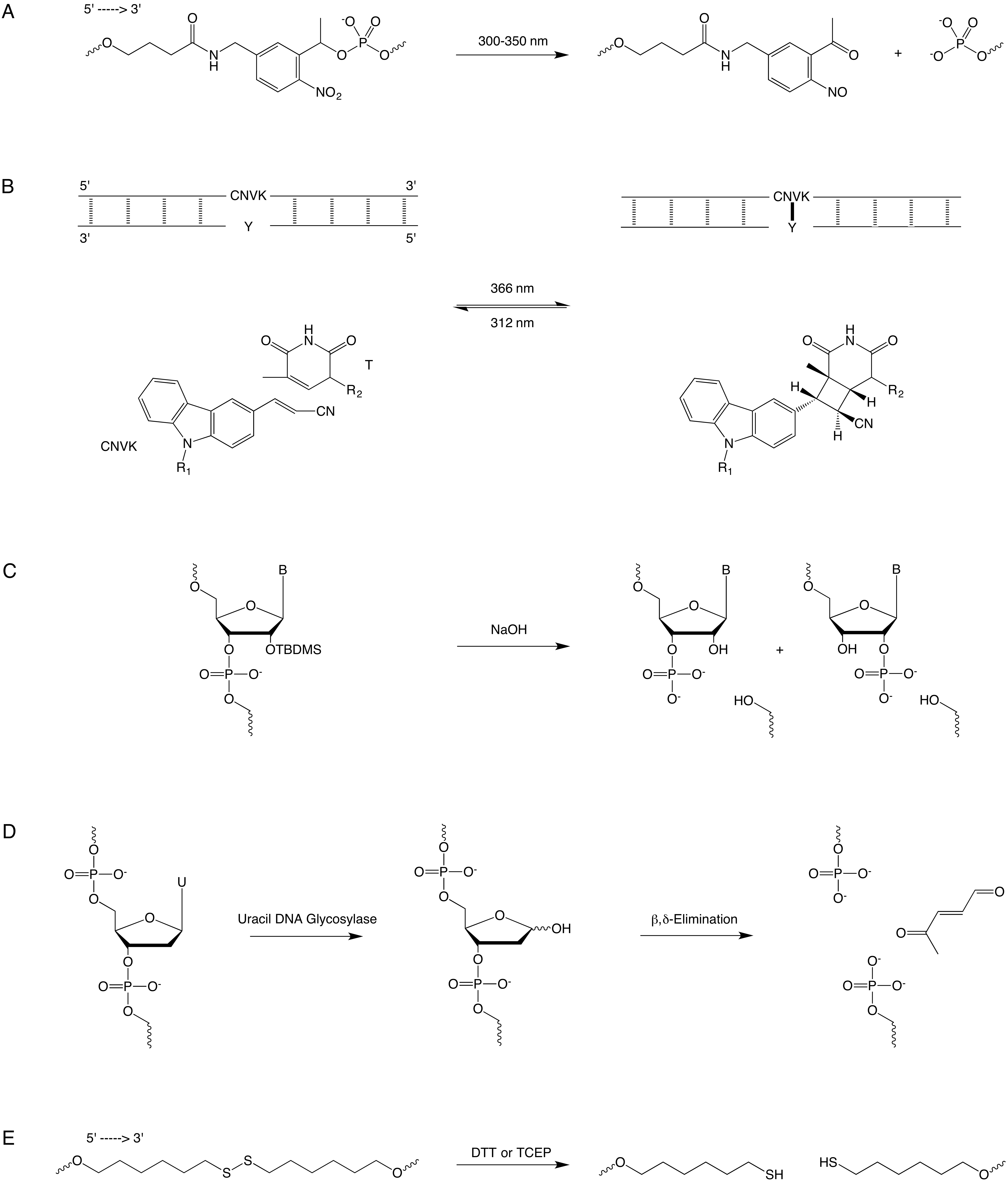 Among these, the most popular would likely be photocleavage. Photocleavage is attractive because it requires no external factors other than light and can therefore be precisely controlled. If one synthesizes an oligonucleotide with PC-Spacer (Figure 1A), one would be able to cleave the 2-(nitrophenyl)ethyl group rapidly and quantitatively using near-UV light at 300-350 nm to yield a capped 3’-phosphate and an uncapped 5’-phosphate. The latter fragment would be compatible with ligation. In addition to PC Spacer, PC Linker, PC Biotin and PC Amino-Modifier are also available. In the same manner as PC spacer, PC Linker allows researchers to attach anything desired, while the remaining two products act as photocleavable labels. PC cleavable linkages have been previously highlighted for biomarker screening (GR27.14) and purification (GR30.16). 3-Cyanovinylcarbazole (CNVK), a photo-crosslinker, can also be considered as a photocleavable linkage. CNVK will crosslink with a hybridized DNA or RNA strand with 366 nm irradiation, and the formation of the resulting CNVK-C/T/U photo-adduct can be reversed with 312 nm irradiation (Figure 1B).

For those working with DNA and other base-stable backbones, another option is the single insertion of an RNA nucleotide as a hydrolyzable linkage. Any RNA nucleotide should be compatible. The resulting chimeric oligonucleotide can be quantitatively cleaved in 1 M NaOH at 65 °C for 30 min. After cleavage, a 5’-OH and a 2’/3’-phosphate are released (Figure 1C). In practice, this works very well, and the TBDMS or TOM group does not even need to be removed beforehand. As an alternative, enzymatic cleavage can be used. For instance, the commonly used enzyme ribonuclease A will rapidly cleave rC and rU insertions without silyl protection in a wide variety of reaction conditions.

On the topic of enzymatic cleavage, 2’-deoxyuridine can also act as a cleavable linkage. The repair enzyme, uracil DNA glycosylase, will remove uracil bases from single- and double-stranded DNA. The resulting abasic site is not very stable and readily undergoes elimination. In the presence of amines, the deoxyribose will undergo β-- and subsequently δ-elimination to give 4-oxopentanal, while leaving a phosphate on both of the released oligonucleotide fragments (Figure 1D).

The final category for cleavable linkers is disulfides. Disulfides are readily cleaved by reducing agents such as dithiothreitol (DTT) or tris(2-carboxyethyl)phosphine (TCEP) to release free sulfhydryl groups (Figure 1E). This would typically be accomplished with Thiol-Modifier C6 S-S, but all other disulfide linkages would also be applicable.

With all these different cleavable linkages, researchers can choose their preferred method based on compatibility with downstream applications. If the linker needs to retain Watson-Crick base pairing, the RNA strategy would be perfect. Likewise, if a ligation is desired after cleavage, then one of the PC products would be a better fit.