Cyclooctyne is the smallest cyclic octyne that can be isolated. Because of the severe deformation of the alkyne from its desired linear geometry, cyclooctynes are highly reactive towards azides without the need for copper catalysis. Copper-free Click Chemistry has some advantages over copper (I) catalyzed [3+2] azide-alkyne cycloaddition (CuAAC). The dibenzocyclooctyne group (DBCO) allows Click Chemistry to be done in the absence of copper, which may have a deleterious effect in biological systems. Also, DBCO is bioorthogonal in vivo and will not react with the plethora of other active groups in biological systems, such as hydroxyl, amine, etc. DBCO is especially useful in situations where users are looking for a simple alternative to CuAAC. 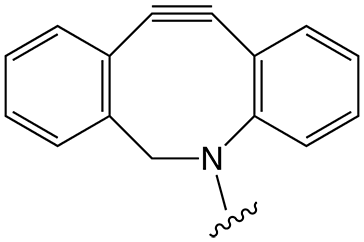 From the variety of cyclooctyne-based copper-free click reagents so far described, we chose to offer compounds based on the dibenzocyclooctyl (DBCO) structure, shown in Figure 1.1-3 DBCO products exhibit the following desirable properties:

For 5'-modification, we chose to use 5'-DBCO-TEG Phosphoramidite (1) in Figure 2, in which the very hydrophobic DBCO moiety is separated from the phosphoramidite and subsequent oligo with a triethyleneglycol (TEG) spacer. We also chose to offer a soluble DBCO-sulfo-NHS ester sodium salt (2) in Figure 2 for post-synthesis conjugation reactions with amino-modified oligonucleotides and proteins.

In addition to these DBCO-based products, we also offer DBCO-dT-CE Phosphoramidite (3) in Figure 2 for inserting a DBCO group at any position within the oligonucleotide. This type of dT analogue has proved to be popular in the past since the tag is projected into the major groove of duplex DNA where it does not disrupt the DNA duplex, while being readily accessible for further reaction.

For increased versatility, we now introduce a further DBCO phosphoramidite – DBCO-Serinol Phosphoramidite (4) in Figure 2. Using our proprietary serinol backbone as a non-nucleosidic spacer allows the DBCO group to be placed at any location within a sequence with multiple additions clearly possible.

In a recent article,4 we noted the sensitivity of DBCO to multiple cycles of iodine oxidation. We now recommend that synthesis of oligos containing DBCO be completed using 0.5 M CSO oxidizer after the DBCO addition. Acceptable results can be achieved with iodine oxidation if DBCO is subjected to no more than 8-10 cycles after addition.

A coupling time of 12 minutes was found to be optimal for DBCO-serinol (4). It was found that DBCO-modified oligos were stable to deprotection with ammonium hydroxide for 2 hours at 65°C or overnight at room temperature, which would allow the use of regular phosphoramidites, including dmf-dG but not ibu-dG. Deprotection with AMA for 2 hours at room temperature showed only slight degradation of the cyclooctyne, making the modification compatible with ibu-dG if Ac-dC is used. DBCO-modified oligos are also compatible with UltraMild deprotection conditions.