The development of antisense technology as a research tool relies on the use of potent agents, efficient delivery of oligonucleotides (ONs) into cells, and the utilization of many controls in experiments1. C-5 propyne phosphorothioate ONs are improved antisense agents that show potent gene inhibition in cell culture when delivery techniques are utilized2. C-5 propyne phosphorothioate ONs have superior binding capabilities compared to ONs lacking the base modification and cause the selective reduction of protein and RNA levels in cells treated with the agents.

C-5 propyne phosphorothioate ONs are not readily permeable to cells in culture. ONs which show potent activity in microinjection experiments have undetectable activity when incubated with cells in culture medium at high concentration. Cell delivery methods, such as microinjection, electroporation, and cationic lipid formulation techniques, work well for delivering the ONs to cells. Of these methods, cationic lipid formulations (cytofectins) are the most versatile and allow the use of nanomolar concentrations of ONs in cell media for observing antisense effects. 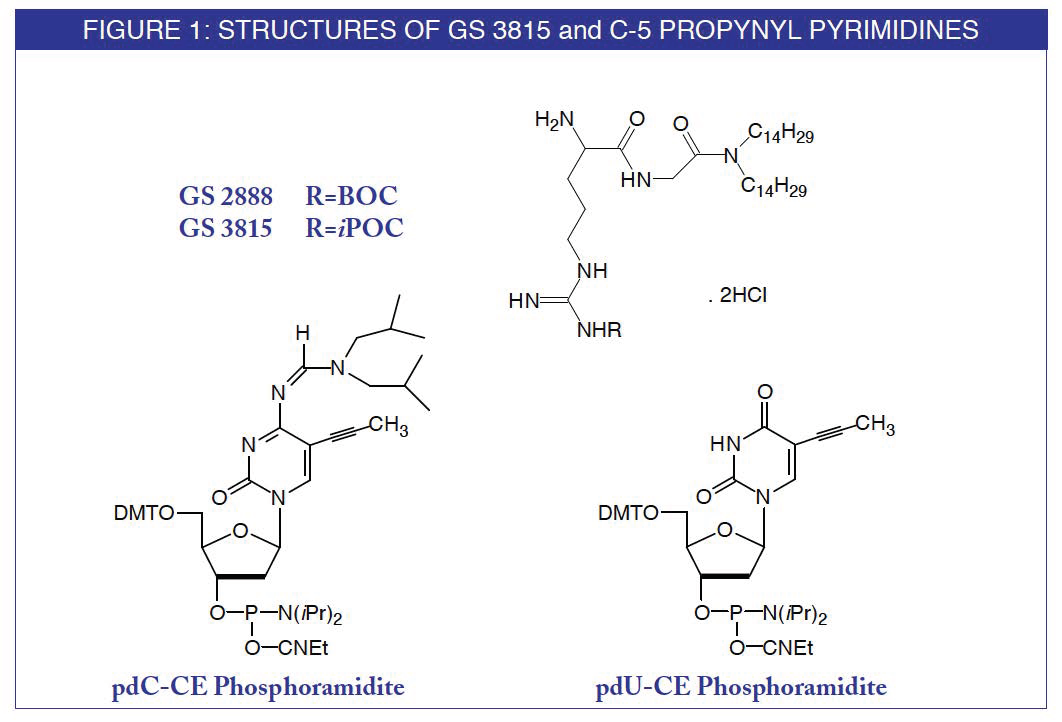 Several limitations previously surrounded the generalized use of cytofectin agents for delivering antisense ONs to cells. Most of the agents that are available suffer from one of the following shortcomings:

(ii) inability to transfect in the presence of serum,

(iii) lack of efficiency for transfecting ONs into cells, and

(iv) inability to transfect a wide range of cell types.

Recently, a novel cationic lipid formulation, termed GS 2888 cytofectin, was described which showed superior ON delivery properties compared to commercially available agents3. This agent has been useful for delivering high quantities of ONs to cells in the presence of serum in the cell medium. The use of serum in experiments mitigates much of the toxicity observed with cytofectin delivery. This agent has the following advantages compared to other cytofectin agents:

(i) it delivers both plasmid DNA and ONs to cells in the presence of 10% serum in cell media,

(ii) it delivers at least 20-fold more ON to cells than other lipids used at their optimal concentrations,

(iii) it transfects a wide variety of cell types, and

(iv) its use requires 4-10 fold less concentration compared to other cytofectin agents.

Using GS 2888 cytofectin with C-5 propyne antisense ONs, gene inhibition can be achieved using low nanomolar concentrations of ON. Inhibition has been described for several genes including cdc2 kinase4, cyclin B14, luciferase3,5, and p27kipl6,7. In each case, gene selective antisense inhibition was observed when compared to mismatched control ONs. These agents have been shown to be versatile tools for elucidating gene function, an area of increasing interest in the wake of the genome sequencing project.

Of further interest is the ability of GS 2888 cytofectin to deliver high concentrations of plasmids to cells. This agent should be of interest to those wishing to use a general transfection agent for transient expression of proteins in cells and for making stable transformants that express a protein of interest.

Using older technology, antisense techniques proved to be problematic and irreproducible in many laboratories. The development of more potent oligonucleotides and improved delivery agents have resulted in a more robust and reliable technology. Researchers still need to screen several ONs to find ones that work (typically at least 5 or 6 for 15 nucleotide long C-5 propyne phosphorothioate ONs), and researchers should be prepared to utilize many controls in their studies. However, the advances described in this report, that are soon to be made available to Glen Research customers, should establish antisense ON technology as a powerful technique for elucidating gene function.

GS 3815 is Gilead's preferred cytofectin since it has better stability in solution during use. In GS 3815 the butyloxycarbonyl (BOC) group of GS 2888 is replaced with isopropyloxy-carbonyl (iPOC).