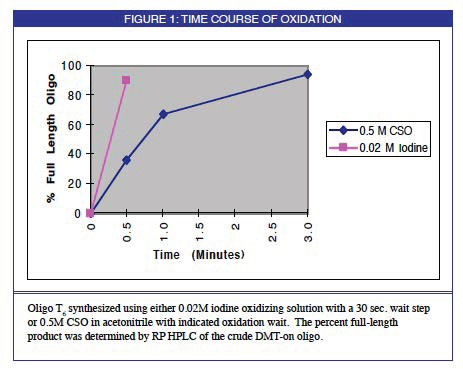 One non-aqueous oxidizer which has been used for both DNA1 as well as RNA2 synthesis is t-butyl hydroperoxide. Peroxides, however, are unstable compounds and extended exposure to them has been reported to result in degradation of oligonucleotides.3 Enantiomers of (10-camphorsulfonyl)-oxaziridine have been used in the mild enantioselective oxidation of phosphites and other P(III) compounds.4 More recently they have been investigated for the enantioselective oxidation of methyl phosphonamidates.5 We, therefore, decided to evaluate them as oxidizers for oligonucleotide synthesis using phosphoramidite chemistry.

Comparison of CSO with Iodine

A 0.5M solution of (1S)-(+)-(10-camphorsulfonyl)oxaziridine in acetonitrile (0.5 M CSO) was evaluated as an oxidizing solution. Oxidation time course was evaluated by synthesizing a test oligo using different oxidizing times and analyzing the crude oligo by both IEX and RP HPLC to determine the percent full-length product.

To test the efficiency of the oxidation, a test oligonucleotide d(A4C3G5T5), was synthesized using either 0.02 M iodine oxidizer or 0.5 M CSO. Following synthesis the crude DMT-on oligonucleotides were analyzed for purity by RP HPLC. The oligos were then purified on a Poly-Pak cartridge and their purity again assayed by RP HPLC. Aliquots of the Poly-Pak purified oligos were then enzymatically digested and the resultant nucleosides analyzed by RP HPLC using a gradient of methanol in 50 mM potassium phosphate (pH 4.0).

Oxidation time course experiments indicated complete oxidation with a 3 minute oxidation wait step, as shown in Figure 2. Shorter oxidation times resulted in an accumulation of shorter truncated fragments when assayed by both IEX and RP HPLC analysis of the crude test oligos. This occurs because incomplete oxidation of phosphorous P(III) to P(V) leaves a population of oligos containing terminal phosphite triester linkages. These linkages are not stable to the acid detritylation step resulting in an accumulation of truncated failures.

When the oligo synthesized using the 0.5 M CSO oxidizing solution with a 3 minute oxidation wait step was compared to the 0.02M iodine control oligo, it was found to be of equivalent or better purity when analyzed by both RP and IEX HPLC. Enzymatic degradation of the product oligonucleotides followed by base composition analysis indicated no modification of bases by CSO. 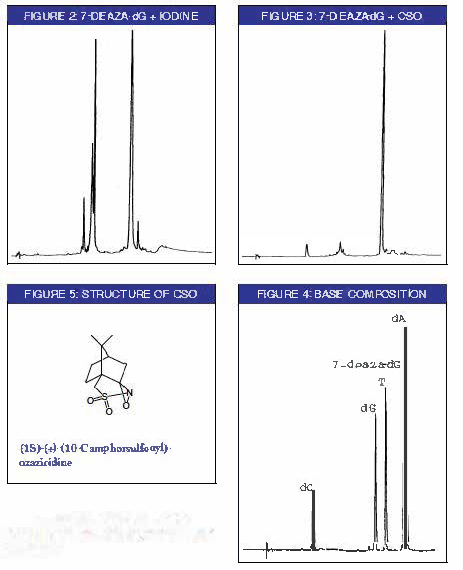 Additionally, an oligonucleotide where three of the dG bases were substituted with 7-deaza-dG was synthesized using 0.5 M CSO as the oxidizer. RP HPLC of the DMT-on oligonucleotide exhibited the profile of a normal oligonucleotide (Figure 3). Following Poly-Pak purification, the product oligonucleotide was digested enzymatically. Base composition analysis by HPLC revealed the expected nucleosides with no sign of side product formation (Figure 4). The peak corresponding to 7-deaza-dG was confirmed by UV spectrum and coelution with an authentic standard.

It was found that a 0.5 M solution of (1S)-(+)-(10-camphorsulfonyl)- oxaziridine in acetonitrile (0.5M CSO) with a 3 minute oxidation wait step was an effective oxidizer for DNA synthesis. A mixed base oligo synthesized using 0.5M CSO was indistinguishable by HPLC analysis from the same oligo synthesized using 0.02M iodine oxidizer. Additionally, oxidation using 0.5M CSO resulted in no distinguishable modification of the bases as determined by base composition analysis of the enzyme digested oligos.

When 0.5M CSO was used for the oxidation in the synthesis of an oligo containing multiple 7-deaza-dG residues, no evidence of damage to the oligo was detected when the crude oligo was analyzed by RP HPLC. Successful incorporation of 7-deaza-dG was verified by base composition analysis of the enzyme digested oligo. The peak corresponding to 7-deaza-dG in the enzyme digested sample, co-migrated with a nucleoside standard of 7-deaza-dG and had an identical UV spectrum.

HPLC conditions used for the chromatograms on this page are available on request.