Early in 1995, Glen Research was happy to introduce as nucleoside phosphoramidites the two bases P and K (Figure 1) which have been proposed as degenerate bases mimicking a C/T and an A/G mix, respectively.1 They may replace the natural DNA bases with little destabilization, and it has been demonstrated2 that they can be substituted independently into oligo-nucleotide primers for the polymerase chain reaction. Now, the properties of the degenerate nucleosides dP and dK in templates and primers have been determined in much more detail.3 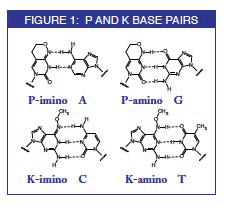 To examine the behavior of the degenerate bases when copied by Thermus aquaticus (Taq) DNA polymerase, two oligonucleotide templates were synthesized (Figure 2). One template contained six dP residues, and the other six dK residues. Each template was amplified using two flanking primers. The PCR products from each template were pooled and cloned. Sixteen clones from each pool were sequenced. The dP nucleotide was copied as if it were either T or dC, with T predominating by a small margin (ratio T:C was 1.5:1). The dK nucleotide was copied as if it were dG or dA, but showed a more marked preference for directing the incorporation of thymidine (ratio of A:G was 7: 1).

Oligomers containing either a mixture of P and K or 2'-deoxyinosine (dI), which is often used as a "universal" nucleoside4, were compared as sequencing primers on three plasmids containing homologous but not identical sequences. The P/K primer proved to be more effective, priming T7 DNA polymerase specifically from each of three related sites; the primer containing six dI residues primed well on only two of the templates and not at all on the third.

To test primers containing P/K mixtures (which is equivalent to a universal base) and to compare with the equivalent primers containing dI in PCR, a second pair of primers, again containing six modified bases was synthesized. The primers direct synthesis towards the priming site used for sequencing; the pair of modified primers should amplify a 185 base-pair product from each of the three plasmids. The P/K pair of primers amplified the correct product from each of the templates using 50 picomoles and 100 picomoles of each primer per reaction. Even at 200 picomoles of each primer, the dI pair of primers only amplified from two of the templates; no product was obtained using 50 picomoles.

The degenerate bases P and K are copied as either pyrimidine (C or T) or either purine (A or G), respectively. They can be used together in oligomers to prime DNA synthesis in PCR and in sequencing reactions. In a direct comparison, they were more effective in primers than dI.

We thank David Loakes, MRC Cambridge, for allowing us to abstract part of the information he presented at the Nucleosides and Nucleotides Round Table in September, 1996.

dP & dK Supports have been discontinued