Over the past 12 months, growth in the synthesis of oligoribonucleotides has increased dramatically, resulting in a serious strain on supplies of RNA monomers. As well as causing discomfort to the producers of RNA monomers, this growth is an indication of rapidly expanding research interest in oligoribonucleotides for a variety of research purposes, including physical studies, antisense experiments, and ribozyme studies. Increases in RNA synthesis experience have also focused attention on such factors as limitations in current monomer protecting groups: isobutyryl (iBu) on the exocyclic amino group of Guanosine may be insufficiently labile while phenoxyacetyl (Pac) protection of the same group may be labile to exchange with acetate during the capping step; and t-butyl-dimethylsilyl (TBDMS) may be incompletely removed with t-butylammonium fluoride in tetrahydrofuran (THF).

Oligoribonucleotides containing 2'-0Me-RNA linkages are being studied for a variety of applications which require the higher binding of RNA-RNA interaction relative to DNA-RNA, along with greatly enhanced nuclease resistance1. Recent reports have included the use of biotinylated 2'-0Me-RNA for affinity purification of small nuclear ribonucleoprotein particles2, the use of a complementary 2'-0Me-RNA sequence to inhibit mRNA processing by interaction with small nuclear ribonucleoprotein particles3, and incorporation of 2'-0Me-RNA modified with cholesterol into liposomes4. It is clear that 2'-0Me-RNA is becoming a powerful research tool in its own right.

However, where "natural" RNA linkages are not necessary for a particular research application, we believe that 2'-0Me-RNA may be a useful alternative. In Table 1 on Page 4, we have collected a comparison of the advantages and disadvantages of substituting 2'-0Me-RNA synthesis for RNA synthesis. The main advantages lie in higher coupling efficiency and simplicity of handling which are more similar to DNA than RNA. On Page 4, we have also illustrated the purity by HPLC of a 2'-0Me-RNA sequence DMT-on immediately after synthesis (Figure 1) and after purification on a Poly-Pak™ cartridge (Figure 2). 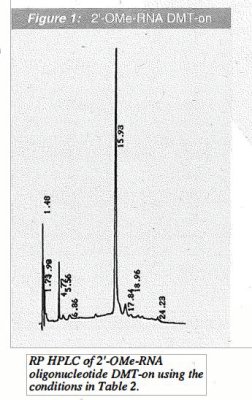 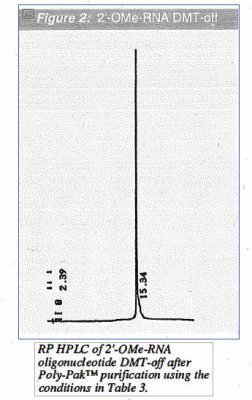 We are able to conclude that, in situations where specific RNA linkages are not required, there are considerable practical benefits for the substitution of 2'-0Me-RNA linkages. The handling of 2'-0Me-RNA is much simpler, being essentially equivalent to DNA, because of nuclease resistance. While the cost of such a substitution is higher, it is not prohibitively so. It is clear that the main benefit achieved by the substitu_tionof 2'-0Me-RNA linkages for RNA linkages is in time saved. Even when scientist time can not be valued monetarily, the time saved can be spent on items of more interest to the researcher, namely original research. 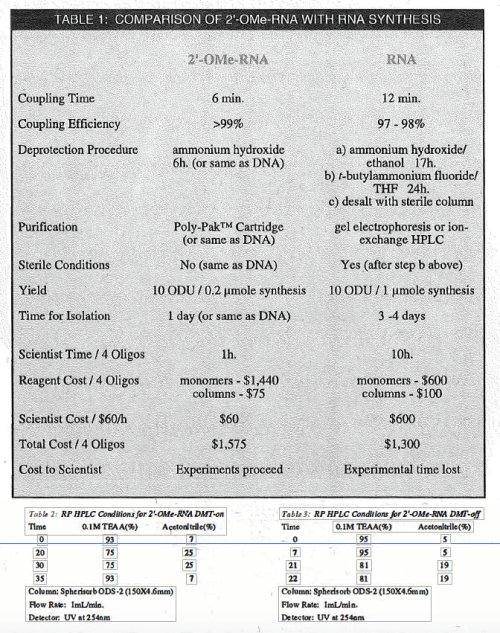