After biotin labelling, the label most often requested has been fluorescein for-use in both diagnostic development and sequencing applications. Synthesis of fluorescein labelled sequencing primers is likely to be the primary use for a fluorescein phosphor­amidite: A phosphoramidite based on the methyl ester of fluorescein has been described 1 . However, we preferred to design a phosphor­amidite which would produce, on deprotection and isolation of the derived oligonucleotide, the same fluorescein-type structure as had been previously prepared using fluorescein isothiocyanate (FITC). Our fluorescein phosphoramidite also contains a DMT group to allow quantification of coupling.

Fluorescein phosphoramidite is used in a manner identical to normal nucleoside phosphoramidites. We recommend that the synthesis be carried out DMT-off to allow the determination of the level of fluorescein labelling. Oligo­nucleotides are deprotected with ammonium hydroxide as normal; the protecting pivaloyl groups are removed and the linkage to fluorescein is stable under these conditions. Fluorescein labelled oligonucleotides may be purified by gel electro­phoresis or HPLC. However, the product, when used for labelling at the 5'-terminus, is designed to be compatible with reverse phase purification techniques, including disposable cartridges. We recommend following the normal DMT-on cartridge purification procedure but omitting the 2% TFA wash (which normally removes the DMT group). The product can be eluted with aqueous acetonitrile to remove all fluorescence from the cartridge (1 - 2 mL is usually sufficient). 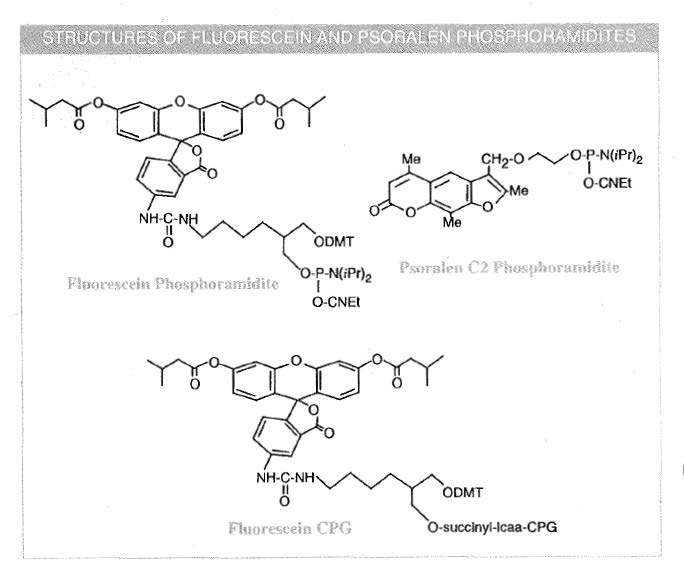