Oligonucleoside phosphorothioates (S-Oligos) are generating considerable interest as potential therapeutic agents because of the nuclease resis!ance of the )nternucleotide linkages . The synthesis of phosphorothioate linkages can be carried out with phosphoramidite chemistry using elemental sulfur1 for sulfurization. This procedure is in routine use in automated synthesis despite several significant disadvantages: the reaction is slow (7.5 minutes); the sulfur may clog solenoid valves; and the solvent contains carbon disulfide which is noxious and potentially explosive. An alternative approach to the preparation of oligophosphorothioates has been the use of H-phosphonate chemistry. We use this technique routinely since the sulfurization is carried out after the synthesis is complete and is done off the instrument. The oligophosphorothioate is purified effectively using a Poly-Pak™ cartridge. Indeed this may be the technique of choice for the preparation of radioactive phosphoro thioate linkages2.

Recently, it was reported3 that the thiosulfonate (1), more correctly named 3H-1,2-benzodithiole-3-one,1,1-dioxide, was a much improved sulfurizing reagent. The compound exhibited the following desirable attributes:
1) It is reliably soluble in acetonitrile, making it safe to use on automated synthesizers.
2) The sulfurization reaction is fast (30 seconds), making the process convenient on small scales and readily amenable to scale-up.
3) The process is efficient, with better than 96% of the linkages being phosphorothioate and the remainder being phosphodiester.
4) The thiosulfonate reagent is stable for at least 1 month in solution.

One significant advantage in the use of the thiosulfonate is that it allows researchers to include both sulfurizing and oxidizing solutions on the instrument at the same time . (The instrument must have an available port and the researcher must be adept at programming.) With this set up, hybrid molecules containing phosphorothioate and phosphodiester linkages can be prepared.

Glen Research is happy to make this sulfurizing reagent commercially available. The reagent will be supplied in solid form in 1g and 2g packs in silanized bottles suitable for direct attachment to commercial synthesizers . Simply add 100ml or 200ml anhydrous acetonitrile. 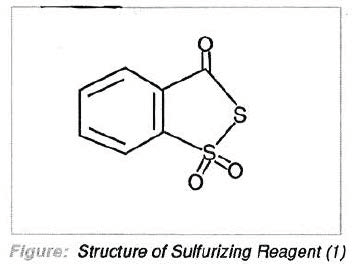