In the four years since we introduced our range of Amino-Modifiers, it has become clear that their most common use was as precursors for the introduction of biotin by reaction with the appropriate biotin NHS ester. While these methods have proved to be relatively successful, the only satisfactory means of purifying biotinylated oligonucleotides produced in this manner is by reverse phase (RP) HPLC. The process is time consuming and suffers from the possibility of cross-contamination which is potentially troublesome in PCR applications.

More than a year ago, we set out to design and produce a biotin phosphoramidite which met the following performance criteria:
1) The biotin derivative must be soluble in acetonitrile at concentrations useful for DNA synthesis.
2) The product must be capable of being added in multiple additions to allow the introduction of several biotin molecules to enhance the sensitivity of detection of labelled probes.
3) The derivative must contain a DMT group to allow either quantification of the level of biotinylation or for use in RP cartridge purification techniques. This latter attribute is especially significant for the disposable cartridge purification of PCR primers where HPLC purification can lead to cross contamination. 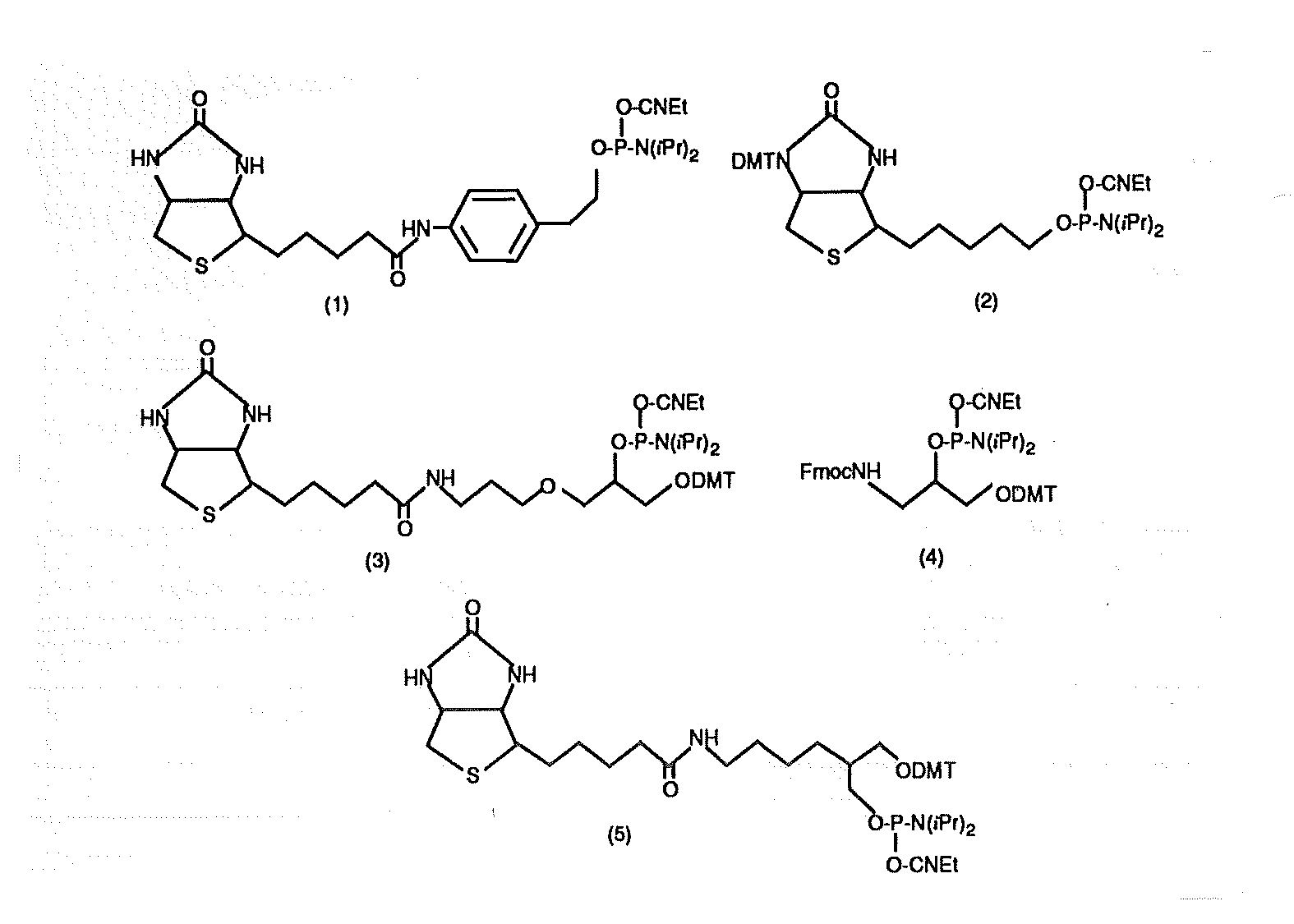 Several descriptions of biotin phosphoramidites have appeared in the literature. A report from a researcher at Du Pont described 1 the biotin phosphoramidite (1) containing a phenethyl amide linkage to biotin. This reagent has been commercially available for some time. The main disadvantage of this reagent is its lack of solubility in acetonitrile which necessitates the use of anhydrous, amine-free DMF/dichloromethane to effect solution. Although lacking a DMT group, the phenethyl linkage is itself relatively hydrophobic and assists in reverse phase purification.

At about the same time, an alternative biotin phosphoramidite was reported2. The reagent (2) does contain a DMT group, is soluble in acetonitrile, but would not be suitable for the addition of multiple biotin molecules. So far, this reagent does not seem to have been made available commercially in the United States. A biotin phosphoramidite, "Biotin-dX", is available from MCRC, Midland, TX. The company does not reveal the structure but the main disadvantage of the product is that it can only be added once at the 5' terminus.

A more recent report describes3 the preparation and use of the biotin phosphoramidite (3) which clearly meets all of our design criteria. Unfortunately, the chemical synthesis of this biotin phosphoramidite is quite tricky and, as described, is not very amenable to scale up. This product is similar in nature to 5' Branched Modifier C3 (4)4 which we have been supplying for some time. (The disadvantage of the use of this branched modifier is that the level of biotinylation of the derived multiple amino groups is quite low, (necessitating HPLC purification of a confusing array of multiple biotinylated species.)

Several groups have noted that the branched modifier (4) produces a linkage similar in structure to natural internucleotide linkages when inserted into an oligonucleotide . A further modification of a branched hydrocarbon backbone with extension of the biotin away from the branching site led to the design of an other biotin phosphoramidite (5). This product meets all of our design criteria and can be added in multiple steps at the 3' or 5' terminus, can be inserted at any position in the sequence, or can be added once at the 5' terminus for subsequent reverse phase purification.

Consequently, we are happy to offer for sale this biotin phosphoramidite. In addition, we are currently investigating an Fmoc equivalent for use in labelling oligonucleotides with other suitable tags. The chromatogram shown in Figure 3 below demonstrates the use of our biotin phosphoramidite to label the 5' terminus of an oligonucleotide. The biotinylated oligonucleotide was simply purified by the DMT-on technique on a Poly-Pak™ cartridge. This product would certainly be of sufficient purity for use as a biotinylated PCR primer or probe.