The Brown Group recently investigated the design of thiazole orange (TO) oligonucleotide probes for DNA and RNA.1 The researchers evaluated a series of different sequences, TO conjugation locations, and TOs in the context of duplex stability, fluorescence, and CD. The data presented provide a wealth of information on TO probe design. Among the different TOs that were studied in this publication, a TO ligand that contained a hexanoic acid linker attached to the benzothiazole (Figure 1) was particularly interesting. This ligand was conjugated to short oligonucleotides containing a single internal amino-modifier. There were twelve DNA oligonucleotides in total, 4 different sequences multiplied by 3 different locations (2’ position of ribose and 2 versions of 5-amino-modified-dU). Each one was hybridized to its complementary sequence for duplex stability and fluorescence analysis. 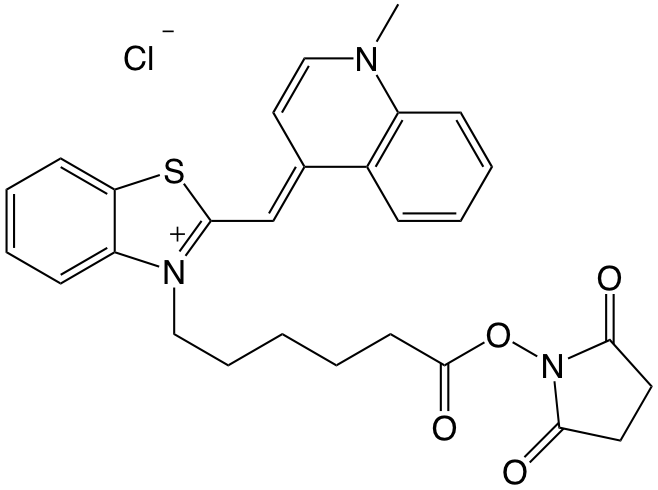 For these oligonucleotides, the results were significant and found to be dependent on the sequence, as well as where the TO was attached on the oligonucleotide. Melting temperatures were elevated by up to 14.6 °C, with an average of 10.1 °C relative to unmodified controls. This stabilization was relatively consistent regardless of whether the TO was on the nucleobase or the sugar. In addition, the hybridization was accompanied by a fluorescent enhancement of up to 8.6-fold, with an average of 3.9-fold. This “lighting up” effect on hybridization was even more significant when the probe was synthesized with a 2’-OMe backbone, mainly due to the fact that the 2’-OMe had much less single-stranded fluorescence. Unlike the melting temperature data, this enhancement notably increased when the TO was attached to the nucleobase. In order for researchers to better explore the use of TO in the fluorescence imaging of DNA and RNA, we are adding this particular TO NHS ester to our offerings.

In our hands, the TO NHS ester couples very well. In one test, TO was coupled to amino-modifier C6-T11. The oligonucleotide (previously desalted with a Glen Gel-Pak) was dissolved in aqueous sodium bicarbonate and mixed with a solution of TO NHS ester in DMSO (~5.5 eq). After incubation at room temperature for fifteen minutes, the reaction was desalted using another Glen Gel-Pak cartridge and analyzed by RP-HPLC (Figure 2). The amino-labeled oligonucleotide was completely consumed, giving a later eluting peak that contained TO. We also observed a second, much smaller (~4 %) TO-labeled oligonucleotide peak. ESI-MS analysis gave the desired TO-oligonucleotide mass as the main peak. In addition, the MS results suggested that the extra peak was a doubly labeled oligonucleotide. We found this second TO quite labile, an observation that would support 3’-OH esterification, and we were able to completely remove the extra TO with ammonium hydroxide at room temperature for an hour (Figure 2C).