Over the years, Glen Research has introduced many products to modulate hybridization interactions, some of which continue to be quite popular. Those that stabilize the A – T base pair have been of particular interest because of how much weaker the interaction is compared to the G – C base pair. Products in this family include N6-Me-dA, pdU, and 2-amino-dA. Due to a third hydrogen bond interaction with T, 2-amino-dA provides the strongest stabilization of duplexes (Glen Report 11.1). However, the 2-amino-dA – T interaction was still weaker than that of a G – C base pair. When we first learned about Professor Richert’s research on a new A base pairing analog called W,1 we were intrigued, and saw it as an excellent new product candidate. Their team showed that W paired with A almost as strongly as G paired with C. With Dr. Richert’s assistance, we are now able to provide customers with another option for strengthening A – T base pair interactions. We called this product dW, to clarify that it is for DNA. 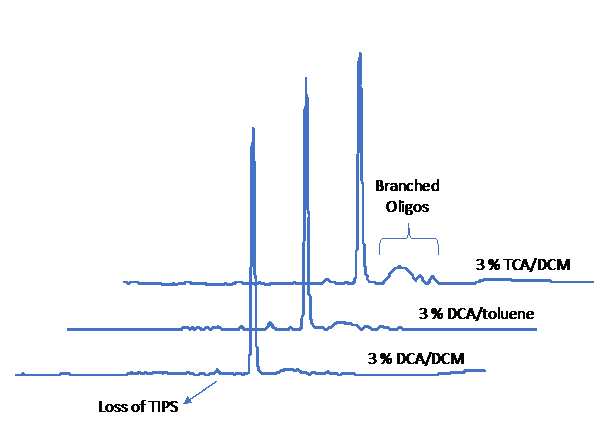 In our hands, we have found that a 15 min. coupling time was sufficient for good coupling efficiency. Also, the use of 3 % dichloroacetic acid (DCA) in dichloromethane is highly recommended as the deblock, for reasons that will be elaborated on below. For deprotection, typical conditions would be ammonium hydroxide at room temperature for 17 hr (sufficient for dmf-dG) or ammonium hydroxide/aqueous methylamine 1:1 at room temperature for 2 hr, but all common deprotection solutions are compatible, as long as no elevated temperature is used. Otherwise, the triisopropylsilyl (TIPS) group can be removed prematurely, and the resulting unprotected alkyne will be susceptible to addition of water across the triple bond to give the ketone.2 For example, in one overnight deprotection of an oligo with ammonium hydroxide at 55 0C, more than 95 % of the TIPS groups were removed, and about a fifth of the alkynes were converted to the ketone. After deprotection, the oligo is dried down, resuspended in 0.5 mL of DMF and 0.1 mL of TBAF/THF, mixed thoroughly, and incubated at room temperature for 30 min. The mixture is then treated with 0.5 mL 2 M TEAA and desalted on a Glen Gel-PakTM column or equivalent.

During the development of this product, we noticed that typical oligo syntheses resulted in several later-eluting peaks in addition to the desired product on RP-HPLC. Investigation into this revealed that the peaks were a result of branching, and the culprit was the deblock. If we capped a dW-containing oligo, treated it with deblock for an extended period of time, and performed one extra cycle of coupling, we were able to observe significant coupling relative to a control. It turns out the pivaloyl (Piv) group is susceptible to removal during the deblocking step, and once the Piv group is lost, an oligo branch can grow from there. The DCA in dichloromethane minimizes this issue. As shown in Figure 1, 3 % DCA in dichloromethane is superior to both 3 % DCA in toluene and 3 % trichloroacetic acid (TCA) in dichloromethane. For purification, we found that branched species containing multiple DMT groups were typically well resolved from the desired single DMT-on product by RP-HPLC. It should be noted that phenyl phosphate linkages are less stable than standard ones. Because of this, deprotection with 0.4 M sodium hydroxide in methanol/water (4:1) overnight at room temperature will cleave off a portion of the undesirable branches, effectively increasing the yield of desired product. Purification of such mixtures will require a size- and/or length-based purification method.