Previously, we reviewed the use of 5-Bromo- and 5-Iodo-pyrimidine nucleosides within synthetic oligonucleotides for probing nucleic acid-protein interactions at their binding interface.1  Recently, a much broader role for RNA in regulating gene expression has been established, through the characterization of previously poorly understood or unknown activities among the many noncoding RNAs, including lncRNA, miRNA2, and others. Here in Part 2, we describe studies of RNA interference that use 5-Iodo-Uracil (5IU) in siRNA oligonucleotides to discern biological mechanism details whereby siRNA is processed in the RNA-induced silencing complex (RISC).

Regulation of Gene Expression and RNA Interference: the RISC

Tomari et al. used homologous siRNA molecules labeled with 5IU and applied photo-cross-linking to discern the processing details of siRNA interaction with several protein subcomponents of the RISC of Drosophila.3

Since the discovery of RNA interference by Fire and Mellow4, the RNAi pathway has been elucidated in many eukaryotes. We now know that an important mode of regulation of gene expression utilizes ribonucleases and RNA binding proteins (RBP), which in turn oversee the production and action of siRNA and miRNA via the following pathways (Figure 1).5 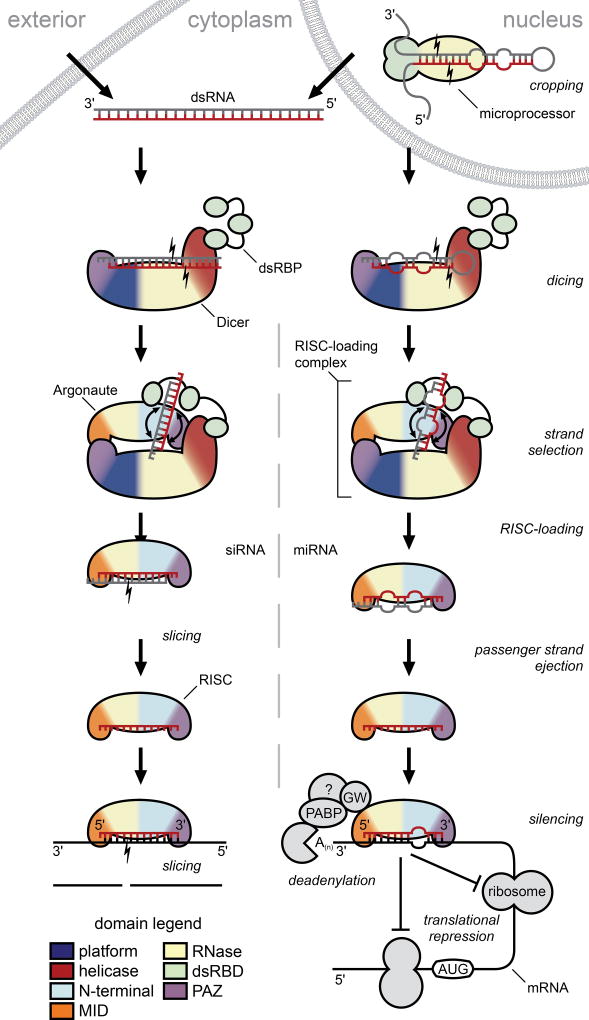 After nuclear processing by Drosha, pre-miRNAs are transported to the cytoplasm, where processing pathways for miRNA and exogenous and endogenous siRNA converge. Dicer cleaves these molecules, yielding miRNA or short ~21 nucleotide double-stranded siRNA, with a two-base overhang on each 5’-end. Each siRNA interacts with a protein complex, including Dicer, RNA binding protein, and an Argonaute family endoribonuclease. These 3 key protein components and others form a gene-silencing ribonucleoprotein complex, the RNA-induced silencing complex. This RNP complex unwinds siRNA into a passenger strand and a guide strand. The passenger strand is degraded into inactive fragments, while the Argonaute-bound guide strand remains bound to the RISC and base-pairs with a target mRNA molecule.  This complex affects gene silencing through either intrinsic endonucleolytic cleavage activity on mRNA or by translational repression of the corresponding mRNA.

Determination of siRNA Processing Mechanisms in the RISC

The Tomari team investigated RISC assembly, in which the formation of RISC loading complex (RLC) containing double stranded siRNA, RNA binding protein (known as R2D2), and Dicer (Dcr-2) acts to identify siRNA asymmetry, recognize guide versus passenger strand, initiate unwinding of siRNA, and associate the guide strand with Argonaute. Previous studies in vitro have shown that recombinant Dcr-2/R2D2 heterodimer or Dcr-2 alone cannot catalyze siRNA unwinding as it binds to the RLC.  Studies were carried out using Drosophila embryo lysates, and by photo-crosslinking a series of 5IU labeled siRNAs, it was shown that fully assembled RLC initiates unwinding of bound siRNA through an ordered stepwise process.

Previous researchers found that photo-cross-linking of siRNA to RISC was highly dependent on the position of 5IU in the sequence.6 In this work, siRNAs 1 and 2 were used to target the luciferase gene (Table 1), where red U indicates the presence of 5IU and asterisks show the position of 32P. Labeled siRNA was pre-incubated with lysate in microwells and then photo-cross-linked by irradiation for 10–15 min at 302 nm using an inverted transilluminator. 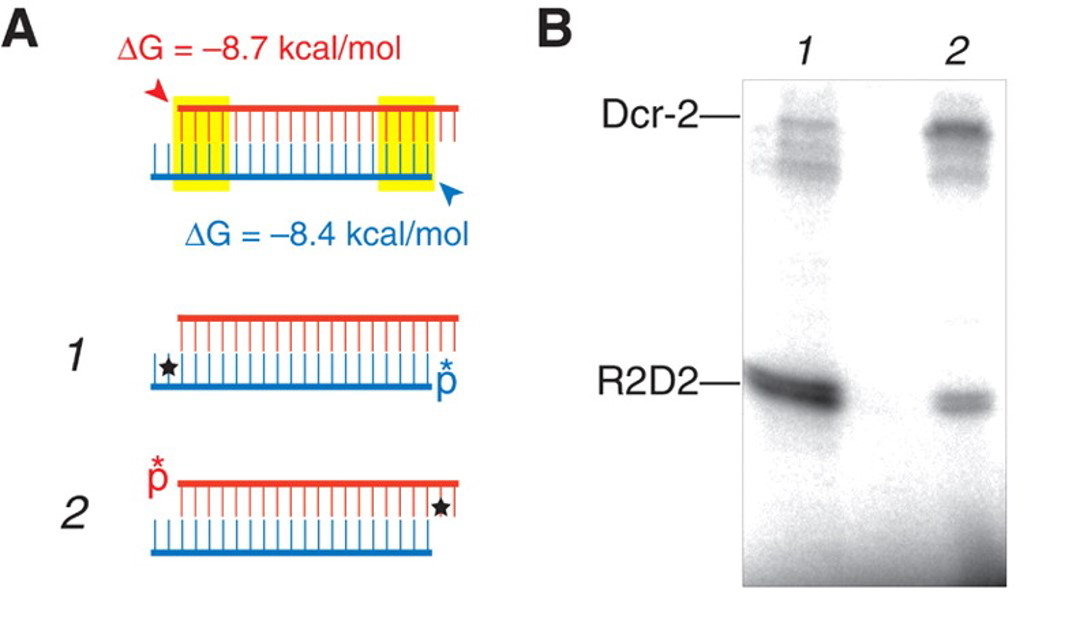 Figure 2. Cross-linking to RBP or Dicer-2 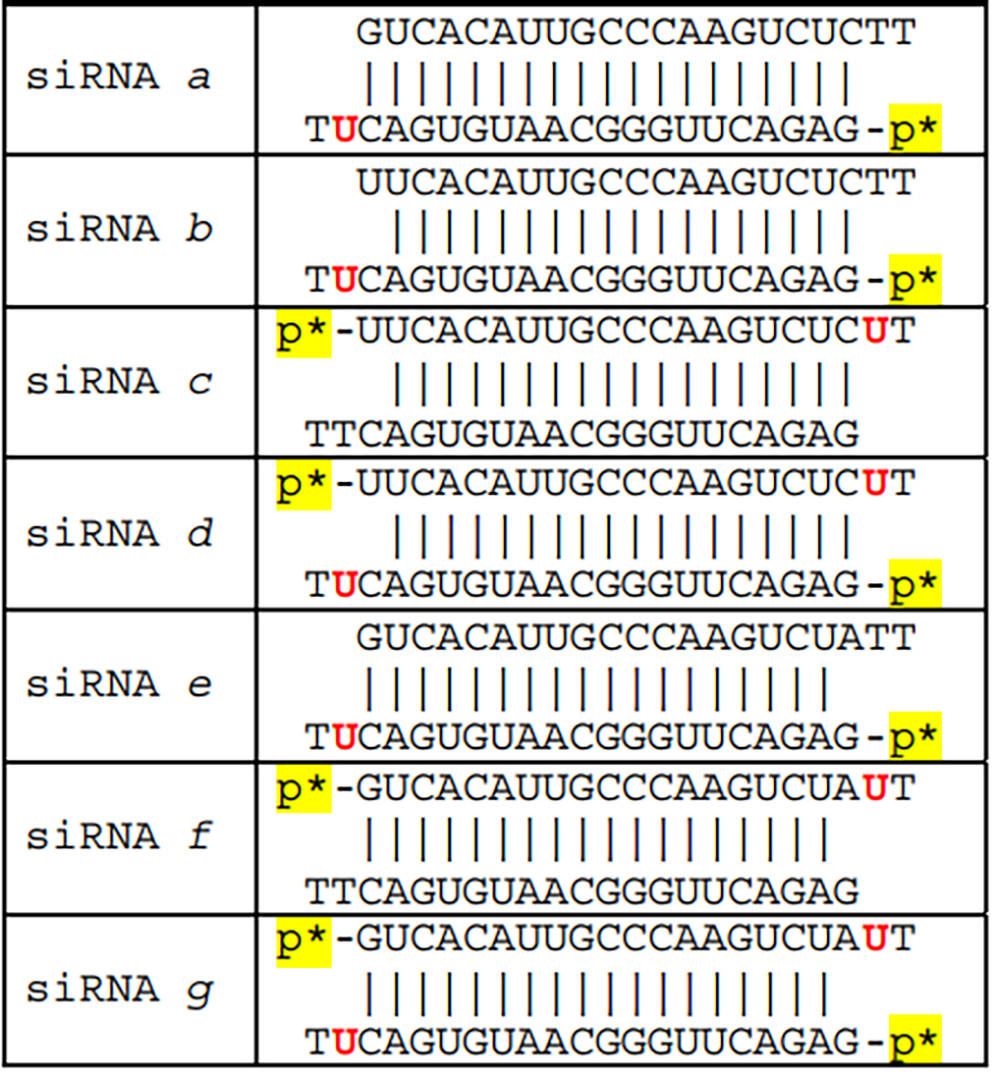 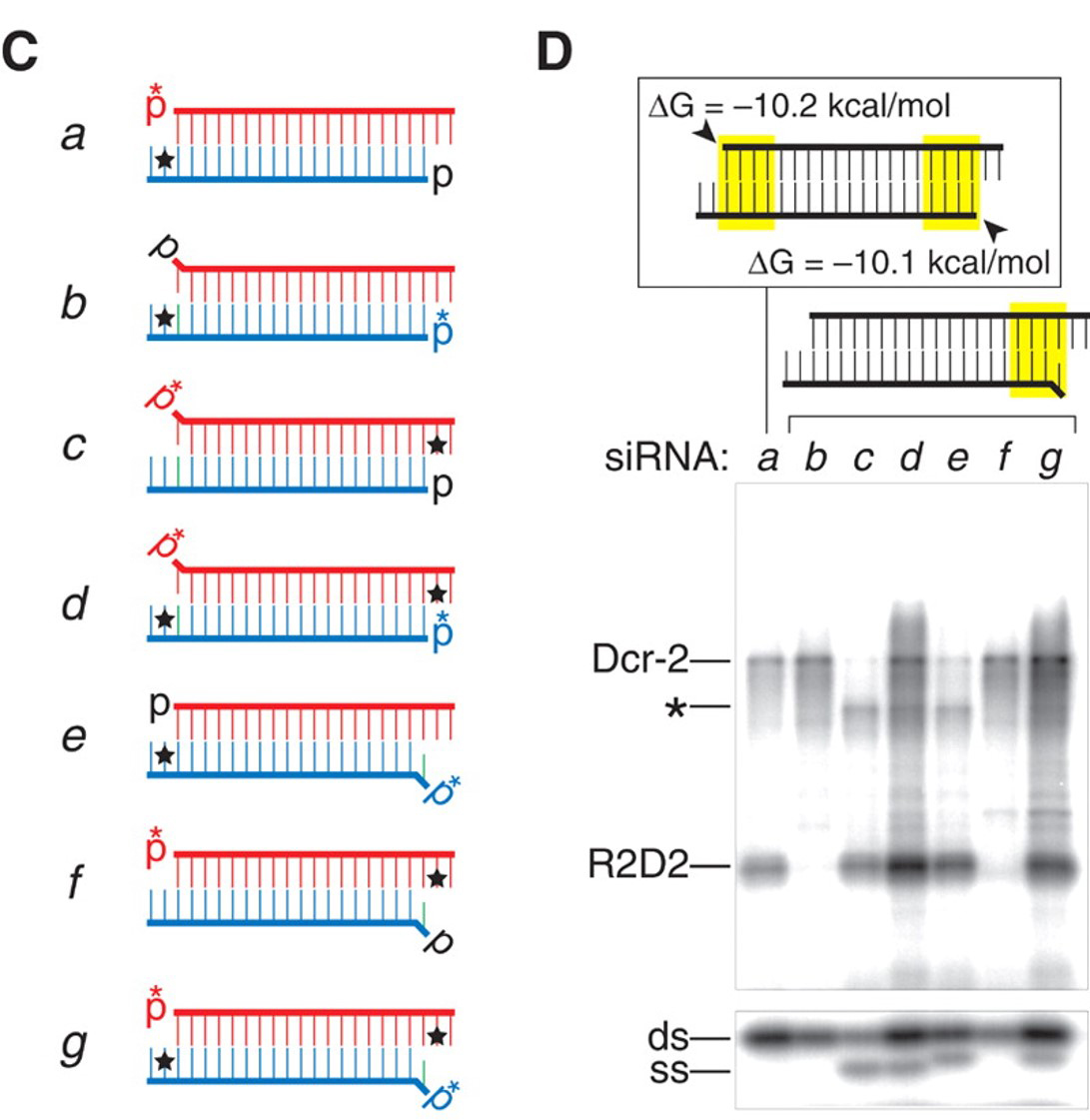 In duplexes b and c, siRNA b contains 5IU near the 3’-end of the antisense strand (one base in from the terminus), while in duplex c, 5IU is positioned next to the 3’-end of the sense strand, respectively. The siRNA d contains both phosphorylated strands of b and c. The gel reveals that siRNA b crosslinks predominantly to Dcr-2 and contains only double-stranded RNA (Figure 3, D, lane b). In contrast, siRNA c crosslinks to RBP and to Argonaute protein, and not at all to Dcr-2. It also contains significant single-stranded RNA, due to siRNA unwinding. siRNA d crosslinks to proteins with a combination of the results in b and c, which is expected since 5IU is present in both termini of corresponding b and c strands.

The reader can follow the gel data in the similar series of siRNAs e, f, and g, in which asymmetry of the single 5’-mismatch is positioned on the opposite strand to siRNAs b, c, and d, while keeping the 5IU at the corresponding location, respectively, adjacent to the terminus of each corresponding oligo. The data are consistent with analogous positioning of the duplex and the less-stable mismatched siRNA end preferentially loading into the RISC.

The authors propose that “R2D2 orients the Dcr-2/R2D2 heterodimer on the siRNA within the RLC. As siRNA unwinding proceeds, the heterodimer is exchanged for Ago2, the core component of the RISC,” and siRNA unwinding only occurs when the RISC, containing Argonaute, is assembled. Further studies support and expand these conclusions and readers are directed to recent reviews.7

Photo-crosslinking synthetic DNA and RNA to protein using 5-bromo and 5-iodopyrimidine nucleosides continues to facilitate research. The crosslink specificity to adjacent protein residues can reveal details of dynamic processes occurring in a large multifunctional ribonucleoprotein complex, as discussed for the RISC. These efficient crosslinkers are well-suited to additional research, among the growing collection of non-coding RNAs and RNP complexes regulating gene expression. Studies may be readily undertaken using the 5-halogen substituted amidites, judicious design of modified oligonucleotides, and readily available photo-cross linking methods.