Beta L-DNA is the mirror image version of natural D-DNA (Figure 1). These two forms of DNA are non-superimposable on one another, in the same way that our right and left hands are non-superimposable. Like other enantiomer pairs, L-DNA and D-DNA share identical structures that differ only in terms of stereochemistry. They generally have identical physical and chemical properties. However, there are two notable differences. Firstly, L-DNA and D-DNA will rotate plane polarized light in equal amounts but opposite directions, and secondly, interactions with chiral molecules will be different, which is most obvious in the way they form double helices. D-DNA will only bind to its D-DNA complement to form right-handed helices, and likewise, L-DNA will only bind to its L-DNA complement to form left-handed helices. For these reasons, enzymes that interact with D-DNA, including nucleases, typically won’t interact with L-DNA. These interactions are also applicable outside of a biological setting. A standard HPLC column will not be able to differentiate D-DNA and L-DNA, but a chiral HPLC column will separate the two. It should be noted that L-DNA is very different from our recently launched LNA (Glen Report 30.2), which is a bicyclic sugar-modified D-RNA.

The terms “D” and “L” refer to the stereochemistry of the deoxyribose unit of the nucleotides that make up DNA. These assignments are based on Fisher projections, and depend on the direction of the hydroxyl group (-OH) at the stereocenter furthest from the aldehyde. If the -OH points to the right, then the sugar is “D”, and if the -OH is pointing to the left, then the sugar is “L” (Figure 2). It should be noted that Fisher projections depict sugars in their open-chain (acyclic) states, but DNA is composed of deoxyribose in furanose ring form. 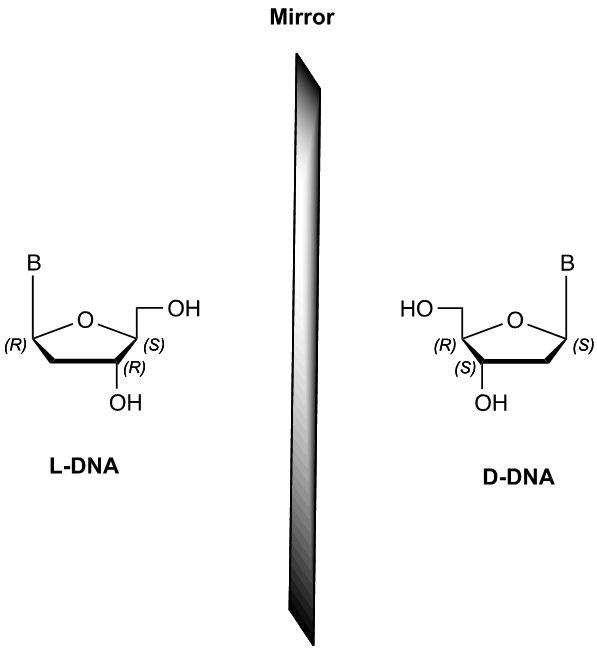 The unique properties of L-DNAs have made them attractive for many biological applications, including use in the field of aptamer therapeutics. Aptamers are functional nucleic acids that, through three-dimensional structure, bind tightly and specifically to molecular targets in the same way that antibodies do. Over the years, many D-DNA aptamers have been developed for targets that range in size from small molecules all the way to whole cells, and one aptamer is currently approved for medical use. D-DNA aptamers, at least native ones, generally have short lifetimes in biological environments due to degradation by nucleases, while L-DNA aptamers do not suffer from this issue. Although the development of L-DNA aptamers is more laborious,1 many of these affinity agents have been developed. Several have been or are currently being investigated in clinical trials involving cancer, diabetes, and other conditions as well.2

L-DNA has also been used to enhance molecular beacons (MBs). Since the stem domain plays a crucial role in the stability of the MB probes, efforts were devoted into enhancing stem stability and minimizing off-target effects. In a series of experiments, Kim et al. showed that MB chimeras containing an L-DNA stem and a D-DNA loop gave a signal enhancement ratio that was double that of the all D-DNA MB.3 This observation was primarily due to a reduction of background signal, as no intramolecular stem-to-loop interaction was possible for the chimeric MB. Additionally, the overall stability of the MB chimera was higher than that of the all D-DNA version, with a melting temperature elevation of 5-10 0C.

In addition to aptamers and MBs, L-DNA has been used as a handle for surface immobilization. In one example, primers containing a section of L-DNA at the 5’-end were used for PCR.4 Since the L-DNA overhang was non-amplifiable, PCR gave double-stranded D-DNA product with a single-stranded L-DNA molecular tag. The resulting L-DNA-tagged PCR products were successfully immobilized by hybridization with complementary L-DNA on a Surface Plasmon Resonance (SPR) gold surface.4

Finally, L-DNAs have been investigated as nanocarriers of drugs. DNA can easily be designed to form three-dimensional structures, and due to a number of desirable properties, including being non-toxic and biodegradable, DNA has been investigated as a polymer for nanocarriers to facilitate the delivery of a whole host of drug candidates. In such an application, L-DNA would offer significant advantages to D-DNA. As discussed earlier, L-DNA is going to be much more stable, and for the delivery of D-DNA/D-RNA drugs, there is the added advantage that there will not be any drug to carrier base-pairing interactions. Several investigations have been published regarding this, and in one of them, the L-DNA tetrahedron nanocarriers were not degraded in 10 % mouse serum after 10 hours of exposure.5 The authors were also able to construct aptamer-tethered L-DNA carriers to successfully deliver aptamers to cells. 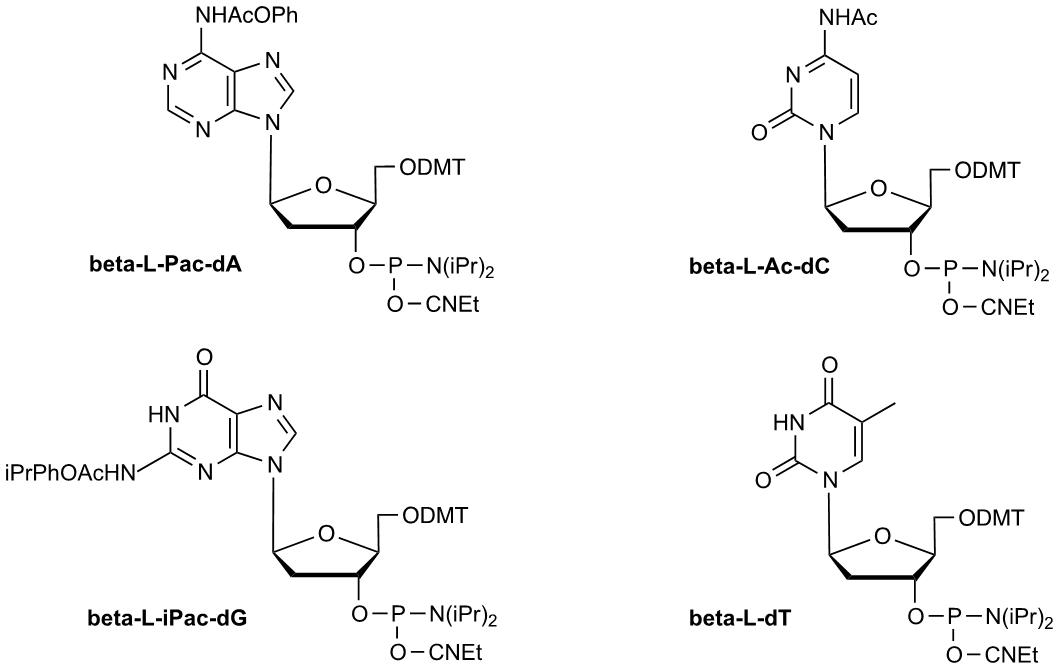 The synthesis of L-DNA oligonucleotides is very similar to that of D-DNA oligonucleotides. The L-DNA Phosphoramidites can be dissolved in anhydrous acetonitrile to standard concentrations. Regarding the coupling of L-DNA, no changes are needed from standard methods recommended by the synthesizer manufacturer. To avoid any exchange of the iPr-Pac group on the dG with acetyl, please use the UltraMild Cap Mix A (40-4210-xx/ 40-4212-xx). For deprotection, UltraMild deprotection will be carried out with either 0.05 M potassium carbonate in methanol, 4 hr at room temperature OR 2 hr at room temperature in 30 % ammonium hydroxide. As previously mentioned, UltraMild monomers will work well in standard syntheses with some conversion of the iPr-Pac-dG to Ac-dG. Ac-dG is deprotected using normal deprotection conditions.