Current procedures in oligonucleotide synthesis require that the solid support contains the first nucleoside which is destined to become the nucleoside at the 3'-terminus of the synthetic oligonucleotide. This situation therefore requires that an inventory of all four regular nucleoside supports must be maintained. At the same time, oligonucleotides with unusual nucleosides, available as phosphor-amidites but not as supports, at the 3'-terminus can not be readily prepared. However, the most worriesome aspect of this situation is the potential for a mistake to be made in the selection of the column containing the 3'-nucleoside. This potential for error may be fairly low in regular column-type synthesizers, but it is especially significant in the new generation of parallel synthesizers where 96 or 192 wells may contain all four supports in a defined grid.

Universal supports are routinely used for preparing modified oligonucleotides with amine, thiol, or phosphate groups at the 3'-terminus. In these cases, it is standard to add the nucleoside which is destined to become the 3'-terminal nucleoside as the first monomer addition. This strategy always leads to a 3'-modifier attached with a phosphodiester group to the 3'-terminal nucleoside. A universal support for preparing regular oligonucleotides must allow the elimination, during the deprotection step, of the terminal phosphodiester linkage along with the group originally attached to the support. 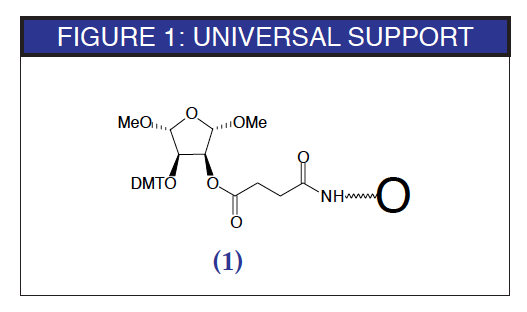 A support which has the potential to be truly universal for the production of oligonucleotides containing a 3'-hydroxyl group has been described recently.1 The structure is shown in Figure 1. The detritylation of the support is carried out under normal conditions, as is the addition of the first nucleoside monomer. The remainder of the oligonucleotide synthesis also proceeds without any changes from the regular cycles.

A proposed mechanism for the base-mediated elimination of the terminal phosphodiester group in the oligonucleotide is shown in Figure 2. This is the crucial step in this strategy. The elimination must proceed promptly under conditions comparable with routine deprotection strategies, using reagents which are also standard. Preferably the reagents should be volatile for simple evaporation (ammonium hydroxide or aqueous methylamine) or readily desalted (aqueous sodium hydroxide).

The most likely options for routine use are shown in Table 1. The conditions necessary for complete elimination of the terminal phosphodiester linkage, although aggressive, are totally compatible with the isolation techniques used commonly for oligonucleotides. However, it is fair to say that they are not compatible with base-sensitive minor nucleosides.

The Universal Support (1) is sold under license from Zeneca PLC.