The interest in and uses for fluorescently-labelled oligonucleotides continues to increase by leaps and bounds. Glen Research is happy to have participated in this growth by being among the first companies to make available reagents for modifying oligos for subsequent labelling with fluorescent dyes. More recently, we have been in the forefront of supplying fluorescent dyes attached to supports for 3'-labelling, as well as to phosphoramidites for sequence and 5'-labelling. We are now happy to introduce two new fluorescent products: 3'-TAMRA CPG (1) and fluorescein-dT (2) (Figure 1). 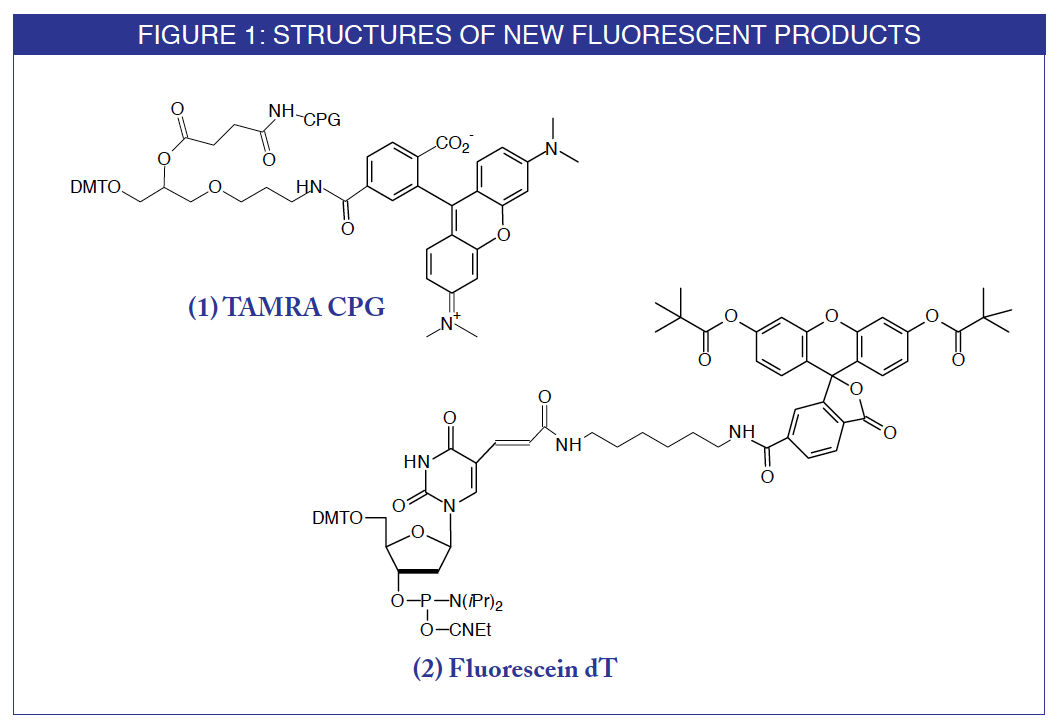 Glen Research is dedicated to bringing the newest techniques and products to the research market. Many of our new products are covered by patent, or groups have shared intellectual property with us. In this Glen Report alone, six new products are offered under license for which a license fee has been paid and royalties will accrue. We fully support the role of patents in our field. In the area of fluorescent labelling, many applications of the products are covered by patent. We would request that our customers make themselves aware of any patents covering the use and processing of labelled oligonucleotides and take appropriate action with the patent holders.

Many researchers have requested that we offer more products containing tetramethylrhodamine (TAMRA) to supplement the NHS ester we currently supply. Because TAMRA is not stable to ammonium hydroxide, the procedure to cleave and deprotect the labelled oligonucleotide must be considered as the first priority. The Fmoc protecting group on our 3'-Amino-Modifier CPGs can be removed specifically with DBU/acetonitrile or piperidine/DMF, releasing the primary amine. By labelling this amine with TAMRA-NHS ester, it is possible to generate an oligo with TAMRA at the 3'-terminus. Using the UltraMILD monomers and deprotection with potassium carbonate in methanol, TAMRA oligonucleotides can be fairly conveniently isolated. To further streamline the preparation of TAMRA oligos, we now offer the support 3'-TAMRA CPG (1).

A recent publication1 describes an alternative TAMRA support, along with a procedure2 to allow the use of regular monomers rather than our UltraMILD set. Cleavage and deprotection is carried out using t-butylamine/methanol/water (1:1:2).

Amino-Modifier C6-dT has become the monomer of choice for modifying oligonucleotides within the sequence. We have been asked for some time to supply this monomer pre-labelled with fluorescent dyes. Now, we are pleased to offer fluorescein-dT (2). This monomer can be inserted into the desired sequence as a replacement for a dT residue. Normal cleavage and deprotection with ammonium hydroxide readily generates the fluorescein labelled oligo.