Chemical alternatives to enzymatic procedures have the potential to lower cost, increase efficiency, and allow the use of unnatural bases. Recently, a new procedure for nonenzymatic ligation of oligonucleotides has been described. (1) In this procedure, the 5'-terminus of the oligonucleotide to be ligated is modified as a 5'-iodo group. The 3'-terminus to be ligated is modified as a 3'-thiophosphate, prepared by sulfurizing in the first cycle using 3'-phosphate CPG. 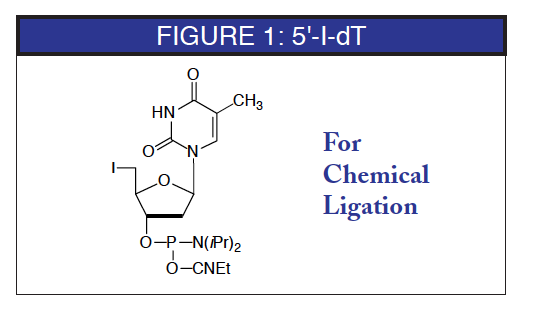 The authors have used this strategy to construct large linear and circular biologically active oligonucleotides. Oligonucleotides containing a 5'-iodo group were prepared conventionally with the exception that deprotection is carried out in ammonium hydroxide at room temperature for 24 hours. Under these conditions, degradation of the iodo group was less than 2%. Oligonucleotides can be purified by RP HPLC since the 5'-iodo group retards the movement of the oligonucleotide on reverse phase. Chemical ligation was achieved successfully using a short "splint" oligonucleotide complementary to the ends to bring them together, followed by the chemical ligation reaction. Yields varied from 44% for simple ligation to 20% for a two-step ligation and cyclization to form a large cyclic oligo-nucleotide from two smaller fragments.