The main reason for the success of phosphoramidite chemistry is the fact that the phosphoramidite monomer, while it is stable in acetonitrile for weeks, is readily activated to form an intermediate which reacts rapidly and efficiently with the 5'-hydroxyl group of the extending oligonucleotide. The efficiency of this coupling step during oligonucleotide synthesis correlates directly with the final yield of product. A great deal of research effort has been focused on developing activators which will increase the rate and efficiency of the coupling reaction.

The most commonly used activator, both historically and presently, is 1H-tetrazole (1). The proposed mechanism of activation with tetrazole is shown in Scheme 1.1, 2 It is interesting that tetrazole acts as a weak acid to protonate the phosphoramidite while also being the nucleophile which displaces the diisopropylamino group. The protonation is fast and reversible, while the nucleophilic displacement with tetrazole, also reversible, is the rate-determining step. The tetrazolide, so formed, is the reactive intermediate which allows rapid and efficient coupling with the 5'-hydroxyl group. 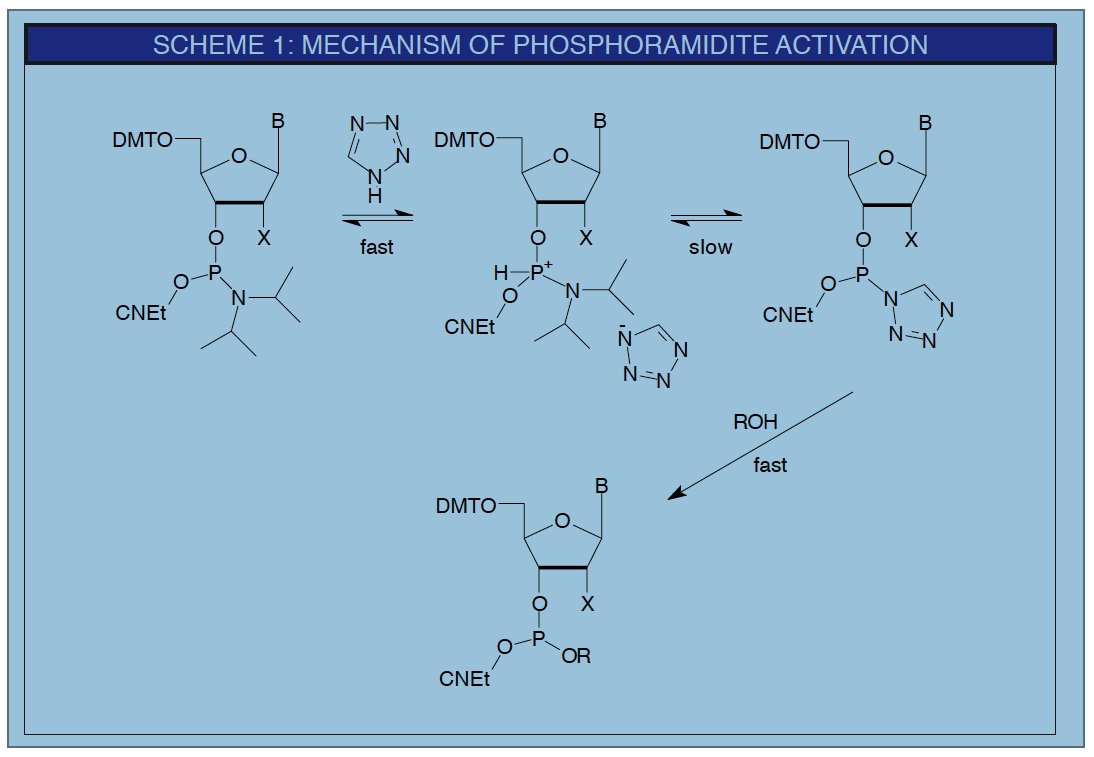 More acidic tetrazole derivatives would be expected to speed up phosphoramidite activation by faster protonation. And so, it transpires that 5-(4-nitrophenyl)-1H-tetrazole (2)3, 5-methylthio-1H-tetrazole (3), and 5-ethylthio-1H-tetrazole (4), among others, have found favor as "turbo" activators. Ethylthiotetrazole is especially popular4, 5 for use in RNA synthesis, where the coupling step is made more sluggish by the presence of the bulky silyl protecting group on the adjacent 2'-position.

A major drawback to the acidity of tetrazole and the quest for more acid versions has been revealed in a study on larger scale synthesis.6 This study revealed that tetrazole is sufficiently acidic to deprotect to a small extent the trityl group in the monomer solution, leading to a small amount of dimer formation. Coupling of the dimer phosphoramidite leads to the presence of longer oligos in the crude product mixture.

The synthesis group at NeXstar Technology Products, working on the preparation of highly modified RNA derivatives, found that the use of tetrazole as activator led to very low yields of full-length products. Addition of 0.1M methylimidazole (NMI) to the activator solution as a buffer to tetrazole's acidity led to much higher yield of full-length product.7 This result indicates that tetrazole is, in fact, slightly too acidic and led to a search for an alternative activator. As can be seen from the mechanism of activation in Scheme 1, the rate determining step is the nucleophilic displacement of the diisopropylamino group from the protonated intermediate. This led to the search for a less acidic but more nucleophilic activator and the discovery of 4,5-dicyanoimidazole (DCI) (5) as the first true alternative activator to tetrazole and its derivatives. DCI offers the following advantages over tetrazole:

The biggest difference between DCI and tetrazole manifests itself at larger scales with a low monomer excess. For example, a 34mer oligoribo-nucleotide, including 2'-fluoropyrimidine residues, was prepared on a 1 mmole scale with 2 equivalents of monomer using 0.45M tetrazole, 0.45M tetrazole + 0.1M NMI, or 1M DCI as activator. No full length product was detected with tetrazole activation, while a low yield (13%) of product was observed with the activator containing NMI. With DCI the full-length product was observed in 54% yield. This is a remarkable demonstration of the increased effectiveness of DCI.

Our studies with DCI show that 0.25M is the optimal concentration for routine small-scale synthesis (< 15 µmole), using normal synthesis cycles. We are therefore providing solutions at that concentration but we will also offer the raw material so that researchers can prepare more or less concentrated solutions should they desire. Distribution of DCI by Glen Research is done in collaboration with NeXstar Technology Products.