Oligonucleotides are routinely prepared on supports to which the first nucleoside is attached via a succinate linkage. Over the years, th quickly in the deprotection step. However, if the cleavage step is carried out with ammonium hydroxide manually or on the synthesizer, it consumes one hour of precious time while releasing only about 80% of the oligonucleotide. This step is, therefore, a bottleneck in the productivity of many synthesis groups.

Is it possible to find a replacement to the succinate group which offers good stability to the synthesis reagents while offering a much faster cleavage step? The oxalate group has been shown to be very labile during cleavage but its stability to the normal synthesis reagents is not good, requiring changes for successful use. In a practical but elegant study1 of various bifunctional carboxylic acids, Richard Pon's group identified hydroquinone-O,O'-diacetic acid as the most satisfactory alternative to the succinate group. Nucleosides with this linker arm (Q-linker) are attached to supports with the same ease as the succinyl linker arm.

The cleavage time in ammonium hydroxide at room temperature was found to be a mere 2 minutes, but what about the stability during synthesis? How significant was premature cleavage of oligonucleotide on the synthesizer because of the basic reagents in the capping mixes and oxidizer? Pon showed that the Q-linker is stable to the capping reagents but very slightly labile to the oxidizer (8% cleavage in overnight exposure which would correspond to about 2,000 normal synthesis cycles).

Ever the skeptics, we set out to test the significance of premature cleavage by preparing sixteen 20mer oligonucleotides on a 0.2 µmole scale, eight with succinate and eight with Q-linkers. The succinate supported oligos were cleaved for 1 hour at room temperature, while those on the Q-support were cleaved for 2 minutes. Both sets were then deprotected normally with ammonium hydroxide. The results are collected in Table 1. The Q-supports actually gave 5% better yields of product than the succinate supports. Oligo purities were equivalent in both sets. 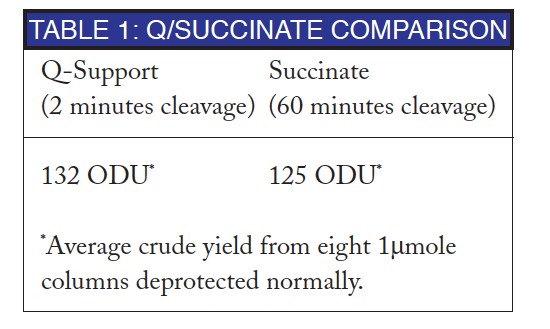 The Q-linker is absolutely compatible with all hydrolytic cleavage procedures, but especially mild procedures like potassium carbonate in methanol. Pon also showed that it is preferable for RNA supports, improving the cleavage time for 2'-silyl protected nucleoside supports from 2 hours (60-65% cleavage) to 5 minutes (95% cleavage). The Q-linker is perfectly compatible with polystyrene supports.

We are happy to offer Q-supports under license from the University of Calgary. Initially, we are offering Q-linkers on 500Å CPG in 0.2 and 1 µmole scales. The four most popular nucleosides are offered, as well as the Universal Support. 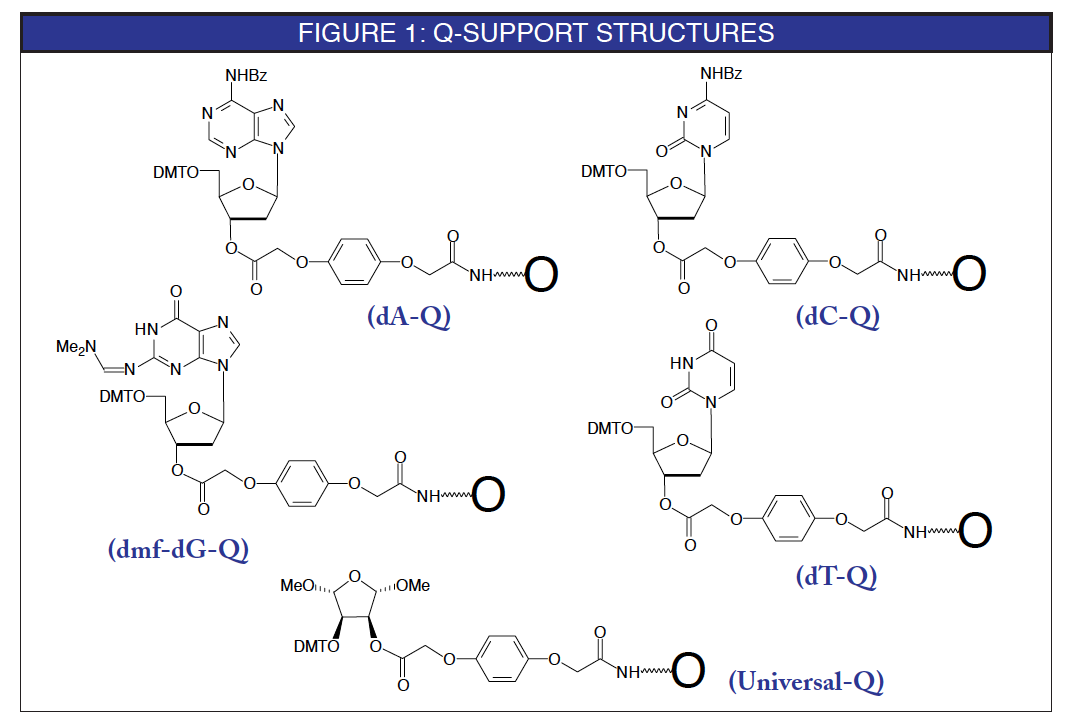