Traditional radioactive labelling of oligo-nucleotides is being rapidly supplanted by non-isotopic procedures. Increased awareness of potential operator exposure to radiation, along with the increasing cost of proper disposal of radioactive waste, has clearly mandated some change. At the same time, diagnostic procedures using non-isotopically labelled oligonucleotides can be carried out in a much wider variety of testing laboratories. Currently, non-radioactive labelling is broken into two main segments: labelling using fluorescent tags which are detected directly at their emission wavelength; and labelling using tags like biotin or digoxigenin which are detected indirectly after capture or association with a suitably substituted enzyme or antibody.

Since the majority of oligonucleotides are destined for sequencing and amplification experiments, which require the 3'-terminus to be available for extension, labelling of the 5'-terminus is the most popular technique. While our future development of new labels will concentrate on 5' labelling, it would be imprudent of us to neglect labelling of the 3' terminus which can be especially useful in probe applications. However, the primary focus of this article is on a series of new 5' labels, including fluorescent and non-fluorescent tags shown in Figure 1. 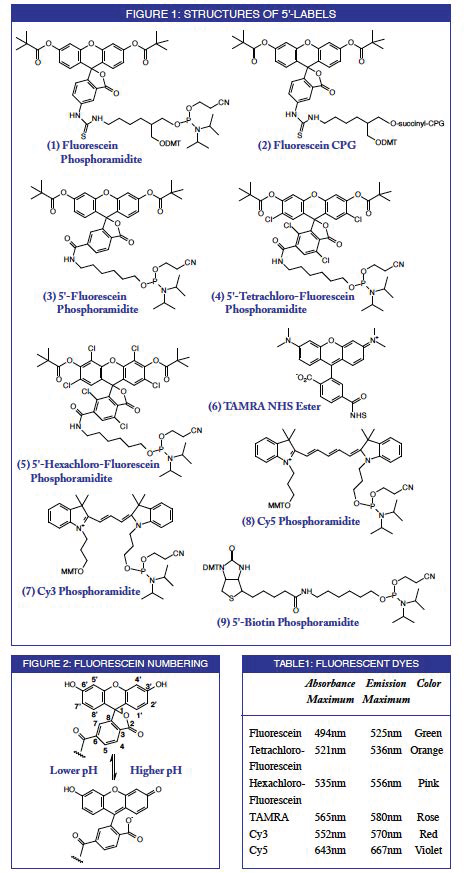 Fluorescein labelled oligonucleotides have found applications in DNA sequencing and amplification, as well as techniques for genetic analysis. In the forefront of this development has been our current fluorescein phosphoramidite, Figure 1 (1), which has proved to be a popular, versatile and effective reagent for the preparation of labelled oligonucleotides. Using this product or the related support (2), fluorescein molecules may be placed anywhere within the sequence. Although the branched structure of the spacer allows a degree of versatility, it can cause some minor complications in use. Due to steric hindrance of the phosphoramidite, an increased coupling time of 15 minutes is optimal. Also, purified oligonucleotides labelled with this product exhibit multiple peaks, especially in reverse phase (RP) HPLC, even though the product is prepared from the 5-carboxyfluorescein isomer alone. (Fluorescein's interesting numbering system is detailed in Figure 2.) This multiplicity is the result of diastereomer formation due to the chiral center in the spacer structure, along with the standard pH dependent structural variation of fluorescein as shown in Figure 2. A typical RP HPLC profile of an oligonucleotide labelled with this product is shown in Figure 3. Although not problematical in the usage of the labelled oligonucleotide, a product containing multiple peaks is always worrisome to customers. We are happy to maintain the supply of this product but clearly a fluorescein phosphoramidite with a simpler structure designed only for 5' labelling would be desirable.
And so we introduce the 5'-fluorescein phosphor-amidite (3) whose sole role is to label the 5'-terminus during oligonucleotide synthesis. The product contains no 4,4'-dimethoxytrityl (DMT) group and can be added only once at the 5'-terminus, thereby terminating synthesis. Although this product is prepared using the 6-carboxyfluorescein derivative, its spectral characteristics are identical to those derived from product (1) in Figure 1. 5'-Fluorescein phosphoramidite can be used with the standard cycle of all DNA synthesizers. However, as with all minor bases and most labelling reagents, it will benefit from an extended coupling time of 3 minutes.

To take advantage of the multicolor detection capability of modern DNA sequencers and genetic analyzers, further derivatives of 5'-fluorescein phosphor-amidite with shifted absorbance and emission maxima would obviously be of interest. We are therefore happy to introduce the tetrachloro (4) and hexachloro (5) phosphoramidites as the first two in a series of fluorescein analogues. The use of these products is identical to their fluorescein parent, as described above. The spectral characteristics of these dyes are detailed in Table 1 and typical RP HPLC traces are shown in Figure 4. 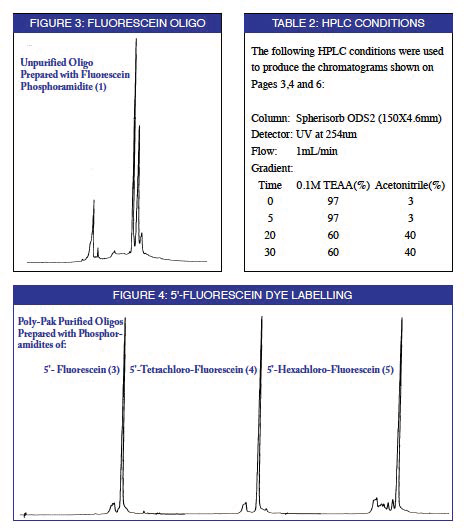 The fluorescein structure is very compatible with oligonucleotide synthesis because it is resistant to hydrolysis with ammonium hydroxide, even when elevated temperatures and extended deprotection times are used.
Unfortunately, the same does not apply to rhodamine derivatives which are not sufficiently stable to survive conventional deprotection. These must be attached to amino-modified oligonucleotides using post-synthesis labelling techniques. Typically, an activated carboxylate, usually N hydroxysuccinimide (NHS) ester, of the dye in solution in DMF or DMSO is conjugated with the amino-modified oligonucleotide in sodium carbonate/bicarbonate buffer at pH 9. Although this technique is time consuming and places demands on the final purification to remove unconjugated dye, it is nevertheless routine and successful.

We feel that our role at Glen Research is to offer interesting products as phosphoramidites but will offer the most popular rhodamine derivative (tetramethylrhodamine, TAMRA) as an NHS ester (6) as an interim step.

Some of our customers have expressed an interest in labelling with cyanine dyes, as well as admiration for their performance in labelled oligonucleotides. The commercial ownership of these dyes is a story in itself but we are happy to introduce them here (see SMALL PRINT page 4) and hope to maintain supply while stimulating development of new uses for them. The two cyanine derivatives we are introducing are Cyanine 3 (7) and Cyanine 5 (8) which differ in structure simply by the number of carbons in the conjugated poly-ene linkage.

Although these products have a 4-monomethoxytrityl (MMT) group and, in principal, could be added in multiple additions, we expect them to be added only once to the 5'-terminus. The MMT group should therefore be removed on the synthesizer. The absorbance of the MMT cation (yellow) is noticeably different from the DMT cation (orange), and so, absorbance based trityl monitors will detect it incorrectly as a low coupling. On the other hand, conductivity detectors will interpret the release more correctly.
Deprotection of oligos containing Cyanine 3 and Cyanine 5may be carried out with ammonium hydroxide at room temperature, regardless of the base protecting groups on the monomers used. If there is a need to use ammonium hydroxide at elevated temperature, Cyanine 3 is more stable than Cyanine 5, but it is always prudent to use monomers with base labile protecting groups to limit the exposure time to 2 hours or less at 55°C. Typical RP HPLC traces of Cyanine 3- and Cyanine 5-labelled oligonucleotides are shown in Figure 5. 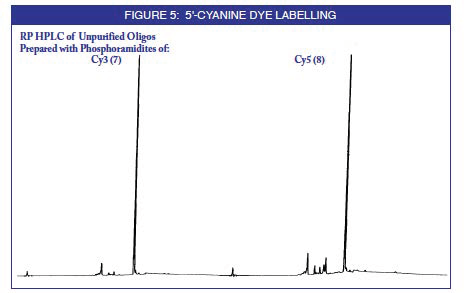 Another biotin phosphoramidite, when Glen already has three such monomers available! Why?

It is fair to say that we have had considerable interest in our new 5' biotin phosphoramidite (9) for a long time. However, it is covered by patent and, although we could have purchased the product and offered it under license, we were totally dissatisfied with the purity of the available product.

We have now obtained manufacturing rights to this product and we can at last offer this 5'-biotin phosphoramidite under license (see SMALL PRINT). While the product which was available previously clearly performed well, the chromatographic purity was substantially less than 90%. We feel that 90% should be the absolute minimum purity for a quality product and the 5'-biotin phosphoramidite from Glen Research will always meet this specification. Higher purity should translate into constant performance with better lifetime on an instrument once the product is dissolved.

Why has this particular biotin phosphoramidite interested us so much? Its performance features are listed below:

For reference, in Table 3 on the previous page, we compare, contrast and suggest usage for our team of biotin labels. 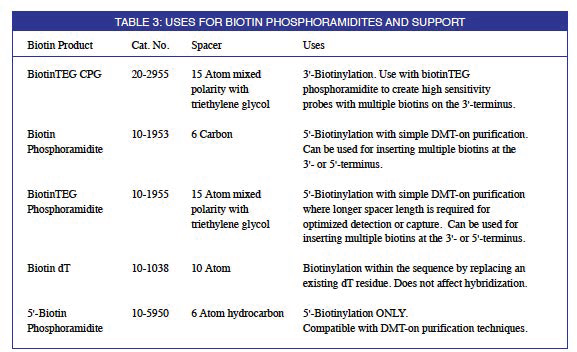 All of the products described above are amenable to purification using RP cartridge and HPLC techniques. Poly-Pak procedures are provided with each product on delivery. They are also available for review or download on the worldwide web: User Guide to Poly-Pak Purification

5'-Biotin Phosphoramidite is sold under license from Zeneca PLC.
Poly-Pak is a trademark of Glen Research Corporation.