Oligonucleotides containing a 5'-phosphate group find use in molecular biology for a variety of purposes: e.g., as linkers and adapters, in cloning and gene construction, and in the ligase chain reaction. The venerable T4 polynucleotide kinase has served researchers well by phosphorylating the 5'-terminus using ATP as the phosphate source. A chemical alternative to kinase, the sulfonyl ethyl phosphoramidite, Chemical Phosphorylation Reagent has become increasingly popular over the years since it is convenient to use on the synthesizer and the yield of 5'-phosphate is generally much higher than with kinase.(1) This reagent includes a dimethoxytrityl (DMT) protecting group which can be removed on the synthesizer to allow a determination of phosphorylation efficiency. However, the DMT protecting group can not be used for DMT-on purification. If the DMT group is intentionally left on the oligonucleotide, it is eliminated along with the sulfonyl ethyl group to produce the 5'-phosphate during the ammonium hydroxide deprotection 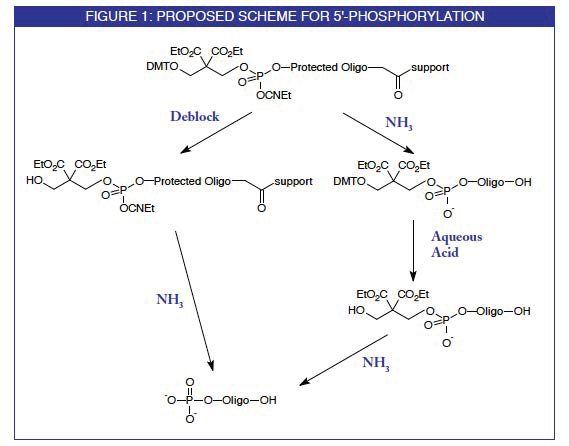 Other reagents containing lipophilic groups have been used as phosphorylation reagents which are amenable to reverse phase (RP) purification techniques. However, none have offered straightforward, mild reaction conditions to eliminate the side chain to give the 5' monophosphate. The most likely candidates for RP compatible phosphorylation reagents are: 2-(triphenylsilyl)ethyl phosphoramidite(2) which requires elimination using tetrabutyl ammonium fluoride at elevated temperature; and 2-tritylthioethyl phosphoramidite(3) which requires oxidative cleavage with iodine or silver nitrate, followed by reaction with dithiothreitol under basic conditions 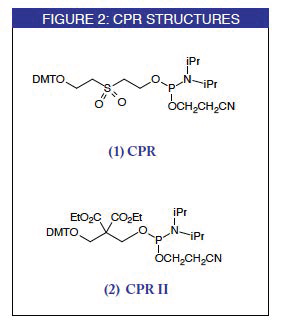 A novel phosphorylation reagent has been described4 which seems to meet all criteria for a successful product. It contains a DMT group which can be removed on the synthesizer to determine phosphorylation yield. The side chain is then completely eliminated during ammonium hydroxide deprotection. Alternatively, with this reagent, the DMT group can be left on the oligo-nucleotide and used for RP purification. The DMT group is removed with aqueous acid and the side chain is eliminated after brief treatment with aqueous ammonium hydroxide to yield the 5'-phosphate. This novel phosphorylation reagent clearly offers great potential for rapid purification of oligonucleotide 5'-phosphates based on the popular DMT-on technique using disposable cartridges like Poly-Pak cartridges available from Glen Research

We are happy to offer CPRII in cooperation with the researchers at the University of Turku in Finland.

Poly-Pak is a trademark of Glen Research Corporation.