In previous issues of the Glen Research Report, we have focused on reagents and techniques used to functionalize synthetic oligonucleotides at the 5'and/or 3'-terminus. These techniques have been successfully applied to the synthesis of oligonucleotides labelled with biotin, fluorescent tags, or enzymes, and to the preparation of affinity supports. However, we could offer no method for attachment of labels at specific points along a defined sequence or for the direct synthesis of affinity supports. Both of these situations had already been addressed by Molecular Biosystems, Inc. (MBI) of San Diego and elegant solutions to both had been developed. We are now happy to make available two products designed to address these tricky situations. AminoModifier- dT (1) can be added in place of a Thymidine residue during oligonucleotide synthesis. After deprotection, the primary amine which is separated from the oligonucleotide by a 10 atom spacer arm, can be labelled or attached to an enzyme. Oligo-Affinity Support (OAS) (2) allows the synthesis of an oligonucleotide which can be deprotected while remaining attached to the support. The synthetic oligonucleotide support can then be used directly for the purification of DNA binding proteins. 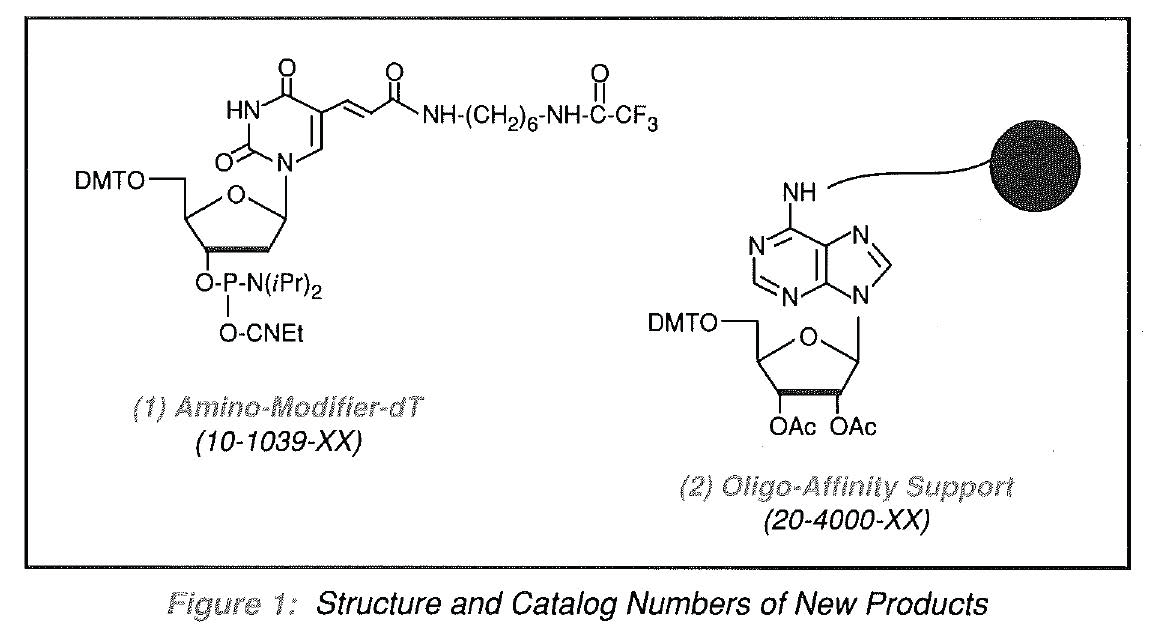 While a variety of products for introducing primary amines at the 5'and/or 3'-terminus of synthetic oligonucleotides are commercially available, there is currently a scarcity of products for introducing primary amines at specific points along the sequence. Such products must be designed to be compatible with the techniques of automated synthesis and must not affect normal hybridization. Amino-Modifier-dT has been established to meet all the required criteria. The modified deoxynucleoside is produced from 2'-deoxyUridine via organometallic intermediates1. The compound allows the incorporation of a primary amine with a 10 atom spacer at any T site within an oligonucleotide. One to all of the T sites can be modified in this way without significantly affecting hybridization.

Amino-Modifier-dT reacts in a manner identical to normal monomers and the trifluoroacetyl protecting group on the primary amine is removed during the standard ammonium hydroxide deprotection step. Purification of the modified synthetic oligonucleotide is accomplished using standard procedures: purification cartridge, HPLC or gel electrophoresis.

The resulting amino-oligonucleotides have been labelled with a selection of reporter molecules, including biotin and fluorescent labels, for use as probes, as PCR primers, or in DNA sequencing2.

The most attractive application for these amino-modified oligonucleotides is in the preparation of enzymelabelled probes3. This method has been used to conjugate alkaline phosphatase and horseradish peroxidase. Following synthesis, the amino-modified oligonucleotide is first reacted with the crosslinker disuccinimidyl subarate (DSS) which provides an active NHS ester 25A from the base. The enzyme is then attached by acylation of the amino groups with the NHS ester. This procedure results in a product composed of one oligonucleotide per enzyme. The activity of the enzyme portion of the conjugate is equivalent to that of the starting enzyme.

A further application of these modified oligonucleotides has been to use the amino groups to attach them to solid supports, allowing sandwich hybridizations and affinity separations4.

Researchers are able to choose from a wide selection of techniques for attaching oligonucleotides to solid supports. However, these techniques usually require synthesis and purification of an amino-modified oligonucleotide, followed by its covalent linkage to an appropriately activated solid support. While these techniques are relatively straightforward, there still exists a need to prepare affinity supports simply and directly.

The Oligo-Affinity Support (OAS)5 consists of fibers with an inner core of Teflon®, covalently coated with an organic layer of functionalized copolymers. A 25-carbon spacer arm terminating in adenosine with a DMT group at the 5'-position is attachetl to the support. Since the linkage to adenosine is stable to acid and base, the oligonucleotide formed by the standard synthesis protocol remains attached to the support after deprotection.

For use as an affinity support for the purification of DNA binding proteins6, one oligonucleotide was synthesized and deprotected using ammonium hydroxide on the support. The complementary strand was then bound through normal hybridization. The affinity support was used to purify a sequence specific DNA binding protein 100 fold to near homogeneity. The Teflon support showed very low levels of non-specific binding of proteins. It also exhibited the further advantage of being composed of non-friable flexible fibers which do not shrink or swell. The matrix proved to be stable and reusable at least ten times.

Although the most likely use for the OAS is in the preparation of affinity supports, ligations and kinase reactions can also be carried out.