The store will not work correctly in the case when cookies are disabled.
Products
Narrow by
Sugar Type

Trimer phosphoramidites1-4 have proven to be extremely valuable because they allow codon-based mutagenesis, which circumvents the common problems of codon-bias, frame-shift mutations, and the introduction of nonsense or stop codons.5 This is accomplished by introducing a mixture of all 20 amino acid codons (or subset thereof) at any location within the sequenced to be mutated. This leads to the production of clonal libraries of exceptional diversity with order-of-magnitude increases in amino acid sequence variance while either maintaining a uniform amino acid distribution6 or one that is biased toward a desired set of amino acids.7

However, difficulties arise when trying to introduce mutations in multiple distal regions of a gene simultaneously. The synthesis of long oligonucleotides is required, which inevitably leads to lower sequence fidelity due to deletion mutants, depurination events and, to a lesser extent, mutations arising from deamination of cytidine, for example.

An elegant solution to this problem is the use of Antisense Trimer Phosphoramidites. These trimers are the reverse complement of the cannonical ‘sense’ codons. When these antisense codons are put into the noncoding strand of a template DNA and amplified by PCR, they will code for the sense codon in the opposite strand of DNA. This allows the powerful technique of PCR Assembly8 to generate not only kilobase-sized genes from short 50mer oligonucleotides, but to simultaneously mutate multiple distal regions of that gene, as shown in Figure 1.

The sense and their corresponding antisense codons are listed in Table 1. Conveniently, many of our existing sense trimers can act as antisense codons. For example, AAC, which codes for asparagine, has the anticodon GTT, which is the sense codon for valine. However, some of the existing trimers, while they can act as an antisense codon, are not good choices for use. For example, TGG, which codes for tryptophan, could be used as an antisense codon for proline because CCA is one of proline’s synonymous codons. However, CCA has a relatively low Codon Adaptation Index (CAI) value9 in E. coli, which could limit protein expression in that commonly used organism. For this reason, the anticodon CGG was chosen for optimal expression in E. coli, as were the other new antisense codons shown in bold in Table 1.

Included in Table 1 are the reaction factors (RFs) for each of the sense and antisense trimers. The reaction factor is critical since the trimers will likely be mixed and they exhibit different rates of reaction when coupling during oligonucleotide synthesis. An example where the RF is used to compensate for differing rates of coupling follows. The RF for AAC is 1.0 and for TAC is 1.6. Therefore, 1.6 equivalents of TAC are needed for every 1.0 equivalent of AAC for equal coupling rates. So to obtain 25 umoles of trimer mix that yields, on average, a 1:1 ratio of AAC/TAC at the mutation site, 9.6 umoles of AAC would be added to 15.4 umoles of TAC.

All of the trimers are available individually so the researchers can prepare custom trimer mixes. Two pre-made catalog trimer mixes are available: 13-1991-xx, for incorporating all 20 amino acid codons equally into a sequence and 13-1992-xx, for incorporating 19 amino acid codons (-Cys). For a custom trimer mix of a particular subset of codons or a trimer mix that represents a set of trimers that is biased toward a particular codon or codons, please contact [email protected] for a quotation and projected delivery date.

There is a concern that the sequence of the trimers has to be verified. For example, CAT coding for histidine, has to be differentiated from TAC, coding for tyrosine. These two trimers have virtually identical lipophilicity and their identity cannot be clearly confirmed by HPLC. This problem has been solved4 using HPLC electrospray mass spectrometric analysis of the trimers, which provides data confirming molecular weight and sequence. 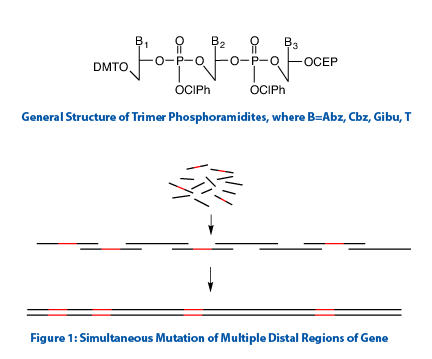 31 Product Results
per page
per page