Antisense oligodeoxynucleotides (ODNs) must be designed with the following properties necessary for optimal activity.

At first glance at least, nuclease resistance is fairly easy to achieve by modification of the normal phosphodiester backbone (e.g., phosphorothioates, methyl phosphonates) or by use of a 3'-terminal cap (e.g., 3'-aminopropyl modification or using a 3'-3' terminal linkage). Improved transport through the cellular membrane can be attained by use of a carrier molecule (e.g., cholesterol, poly-lysine) or by backbone modification to more lipophilic linkages. Increasing the affinity and specificity of an oligonucleotide has been more difficult to achieve since this necessitates modifying the natural bases which are already almost perfectly set up for optimal hydrogen bonding. This article covers one way1 in which advances have been made in improving affinity while maintaining specificity.

C-5 methylated pyrimidine deoxy-nucleosides are known to form more stable duplexes and triplexes than their corresponding pyrimidine derivatives. Consequently, thymidine and 5-methyl-2'-deoxyCytidine (5-Me-dC) form more stable complexes than 2'-deoxyUridine and 2'-deoxyCytidine (dC). For example, substitution of 5-Me-dC for dC in a duplex structure has been shown2 to increase Tm by 1.3¡ per substitution and in a triplex structure by 1.7¡ per substitution. The authors postulate that this effect is caused by entropic factors in that the presence of the methyl residues eliminates water molecules from the duplex structure.

Synthesis of 5-(1-propynyl)-2'-deoxy-Uridine (pdU) and 5-(1-propynyl)-2'-deoxyCytidine (pdC) monomers for oligonucleotide synthesis demonstrated1 that both substitutions enhanced duplex stability while triplex binding was improved by substitution of pdU but destabilized by pdC. Substitution of methyl with 1-propyne at the C-5 position of pyrimidines allowed better stacking of the bases since the propyne group is planar with respect to the heterocyclic base. At the same time, propyne is more hydrophobic than methyl and this property contributed to a further increase in binding. The improved lipophilicity of the propyne group may also improve transport through cell walls. Duplex binding enhancement due to these modified bases was substantial (1.7¡ per pdU residue and 1.5¡ per pdC residue).

Similar results were found3 using 5-propynyl-2'-O-allyl derivatives, paU and paC. These derivatives were found to bind with high affinity to RNA targets, enhancing binding relative to control by 1.7¡ per paU residue and 2.0¡ per paC residue. This significant increase results from a combination effect of both propynyl and allyl modifications.

Inhibition of gene expression by an antisense ODN containing C-5 propyne modifications has been examined4 in detail. In this elegant study, researchers at Gilead Sciences were able to specifically measure antisense activity without interference from cellular uptake and intranuclear degradation using a rapid and controlled assay system. ODNs were introduced into cells by microinjection along with two plasmids that direct the expression of two separate proteins. Antisense inhibition of the RNA target sequence would arrest the production of one protein without affecting the expression of the second control protein. Protein production was monitored by fluorescence assay. Thankfully for this chemist, the techniques used have been lucidly reviewed5 elsewhere (page 1930 of the review article). However, the results were indeed dramatic in that the C-5 propyne substituted phosphorothioate ODN inhibited gene expression at the very low concentration of 0.05 µM. The modified phosphorothioate was 50X more effective than the corresponding phosphodiester ODN, presumably as a result of increased nuclease resistance. The corresponding 2'-O-allyl-RNA derivatives did not inhibit gene expression even though they exhibit higher affinity for the target RNA sequence. This would indicate that RNase H cleavage of the target RNA complex is necessary for potent antisense inhibition.

The authors4 note that "The C-5 propyne-substituted phosphorothioates represent a new class of ODNs that may prove to be universal reagents for the inhibition of gene expression".

Glen Research is happy to offer pdU- and pdC-CE phosphoramidites by exclusive license from Gilead Sciences. It is clear that the article in Science4 has generated a high level of interest in these products and we look forward to maintaining a routine, high-quality supply of them. In the near future, we hope to add the C-5 propynyl-2'-OMe-RNA derivatives which may prove to be useful tools for the evaluation of mechanisms of antisense inhibition. We also see applications for the C-5 propyne derivatives in PCR experiments, especially where the target is purine rich. 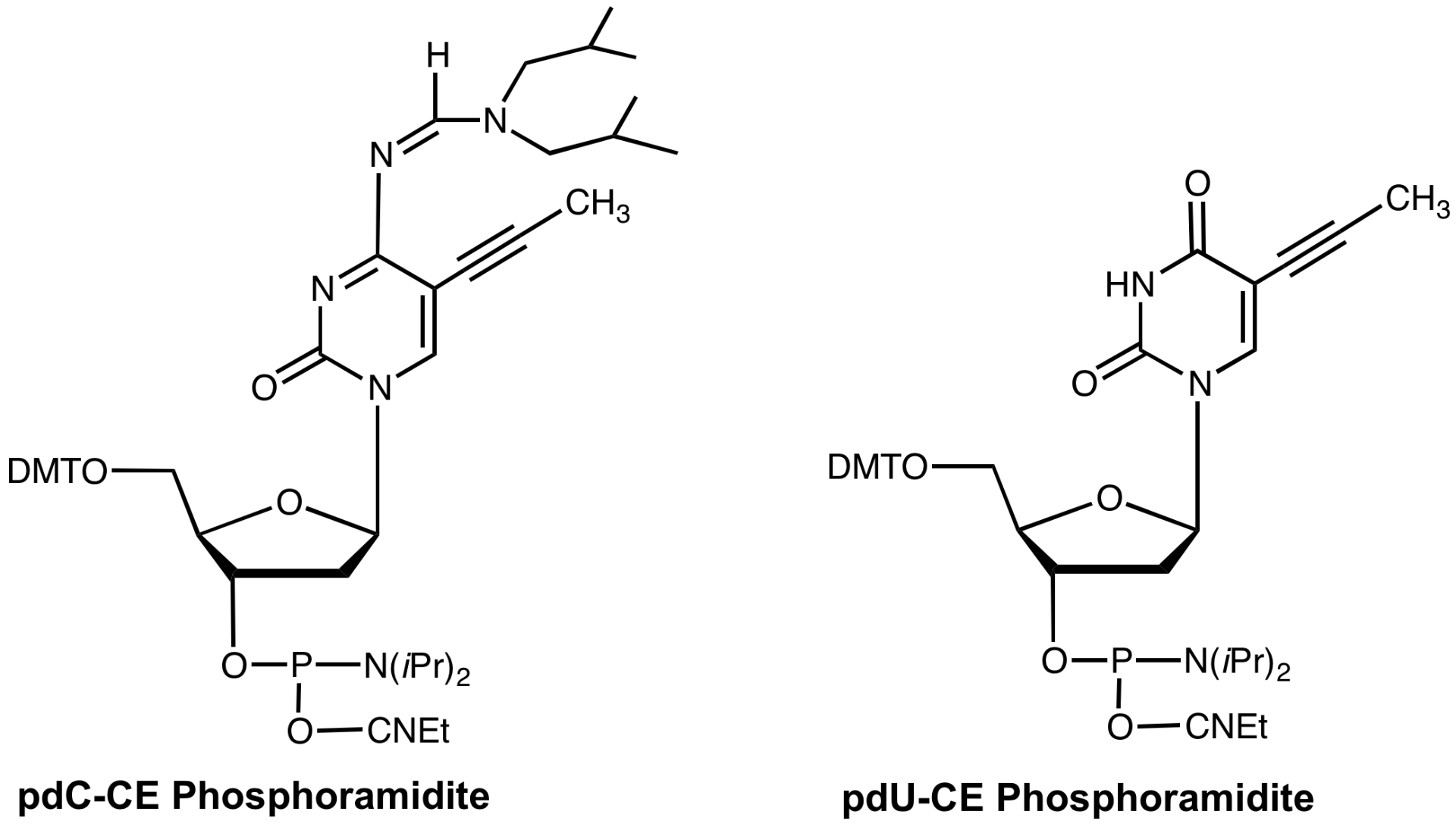 The pdC and pdU-lcaa CPGs have been discontinued.