Glen Research has been active in supplying fluorescent dyes for labelling oligonucleotides for close to 30 years. Indeed, fluorescent dyes are probably the most commonly used tags for modifying oligonucleotides since they offer such sensitive detection in a wide variety of techniques varying from sequencing to genetic analysis. We offer a broad range of fluorophores covering most of the fluorescence spectrum. However we have never had a good substitute for Texas Red® or Alexa Fluor® 594, both of which are not amenable to the conditions of oligonucleotide synthesis and deprotection.

Our long-term relationship with the Epoch Biosciences division of ELITechGroup has allowed us to evaluate several of their proprietary AquaPhluor® family of fluorescent dyes. AquaPhluor dyes have been developed to allow access to fluorophores containing large fluorescent aromatic heterocycles with their natural hydrophobicity substantially modulated by the presence of a charged phosphonate group in the molecule. For phosphoramidite chemistry, the latent phosphonate group is elegantly protected with a trifluoroacetamidobutyl (TFAAB) group, which is removed during base deprotection by a mechanism shown in Figure 1. The resulting negatively charged phosphate forms a hydrophilic zwitterion with the positively charged dye.

A 3 minute coupling time is recommended.

This support should be used in a manner identical to a normal protected nucleoside support since it contains the DMT group.

However, the last more aggressive treatment led to a small amount of degradation of the dye.

It should be noted that an interesting side reaction of AquaPhluor® 593 was observed when using a fast-cleaving support, e.g., Glen UnySupport FC or a Q support. This side reaction leads to a non-fluorescent impurity. However, this impurity, formed only during deprotection with ammonium hydroxide using a fast cleaving support, can be eliminated using a pre-treatment with 10% diethylamine in acetonitrile for 2-3 minutes (Figure 3a).

Oligonucleotides containing AquaPhluor® 593 can be deprotected using AMA and no pre-treatment with a hindered base is required, as shown in Figure 3b. 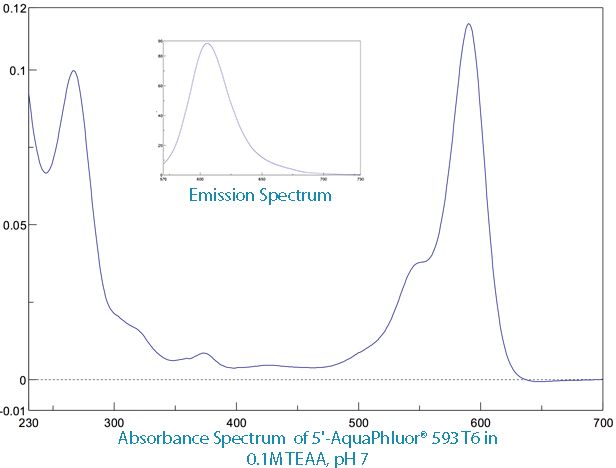 Transient Cyanoethylation - an unexpected route to chemical bleaching of a fluorophore