In the most recent issues of the Glen Research Report, several techniques for the chemical modification of synthetic oligonucleotides have been discussed. Over the last few months, we have received feedback f ram researchers and we feel that some of their comments may be of general interest. 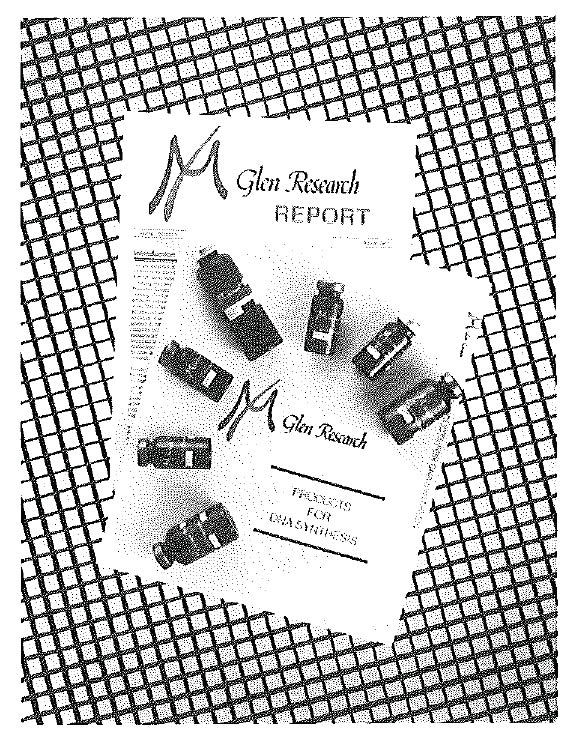 In response to several requests, we are appy to offer the 5'-Thiol-Modifier C6 designed to allow the production of thiol specific probes1 and attachment of proteins to oligonucleotides. We chose the 6 carbon linker arm which has proved to be most popular in the 5'-amino-modifier series. A trityl group has been used to protect the thiol group. However, this group is stable to acid deprotection, requiring oxidative cleavage with, for example, silver nitrate.

Labelling with biotin has become a standard technique in DNA chemistry. We are happy to introduce a kit shown to generate the most sensitive assay results. The biotin includes a 14 carbon (XX) spacer terminated in NHS ester for attachment to a primary amine at the 5'terminus. The kit includes a protocol and all reagents necessary for biotinylation at the primary amine.

Glen Research 5'-Amino-Modifiers have proved to be quite popular and have performed admirably in a variety of situations. The six carbon linker has proved to be the most useful in a variety of applications. Consequently, we have added 0.5g packs of this product to our catalog. Several requests were obtained for a two carbon linker due to its applications in DNA sequencing. Accordingly, we have also added this item to our catalog; details are shown below.

While these linkages are prepared in a manner analogous to phosphoramidates, it is now clear that the synthesis is difficult to perform because of the necessity of maintaining absolutely anhydrous conditions. Even traces of moisture lead to the production of a mixture of phosphotriester and phosphodiester linkages. It is, therefore, doubtful that this procedure will lead to reproducible and sensible results.

The main difficulty encountered by researchers using RNA supports has been the packing of synthesis columns. We now offer these supports packed in disposable columns suitable for use in ABI and Du Pont/Vega instruments as well as Biosearch instruments. Ordering information is shown below.

In our review of the use of RNA supports for the production of oligodeoxynucleotides modified at the 3'-terminus, we omitted to reference a paper2 by Zudhir Agrawal and Mike Gait. In this issue we correct our omission and thank Dr. Agrawal for bringing it to our attention.