While advances in oligonucleotide synthesis have allowed rapid, facile and efficient production of DNA fragments, purification remains time-consuming and occasionally ineffective. In some applications, there is no need for purified product. However, if purification is necessary, what is the optimum method available for a specific set of circumstances? In this article, we review the options currently available for DNA purification.

The two main techniques used for the purification of synthetic oligonucleotides are polyacrylamide gel electrophoresis (PAGE) and high performance liquid chromatography (HPLC). While the choice of technique may depend simply on previous experience or access to equipment, there are some basic advantages to both techniques.

One of the most attractive techniques for purification is RP HPLC with the dimethoxytrityl (DMT) group still attached at the 5'-terminus of the synthetic oligonucleotide. With this technique, failure sequences (containing no DMT groups) are virtually unretained on the column while the product is retained and eluted later. In general, a set of components with the DMT group still attached is revealed. Normally, the product accounts for greater than 95% of these components. The buffers used in this RP HPLC technique are volatile so lyophilization affords the product rapidly and in good yield after removal of the DMT group with acetic acid.

RP HPLC can also be used for the purification of fully deprotected oligonucleotides. The technique retains the advantage of rapid recovery of the purified product simply by lyophilization of the volatile solute.

Recently, several HPLC column manufacturers have introduced ion exchange HPLC columns specifically for the analysis and purification of synthetic oligonucleotides. These columns are capable of superb resolution of components in the product mixture and, in time, are likely to provide new insights into the synthesis process. The columns have a high capacity and even analytical columns may be used in a preparative mode. Semi-preparative columns are available for the purification of larger quantities of product.

Reverse phase cartridges have been popular1 for some time for rapid and inexpensive purification of synthetic oligonucleotides. The technique involves evaporating the ammonia used for deprotection (since the silica gel based support is not stable to high pH), redissolving the crude mixture (with DMT group still attached), and introducing the mixture onto the cartridge. The purification procedure is similar to that described above for RP HPLC columns. The DMT groups are later removed by treatment with acetic acid prior to lyophilization to give the purified product.

Several disadvantages, however, exist with this technique. During the step to concentrate the ammonia, a second base, for example, triethylamine, must be added to maintain a basic solution and avoid the loss of the DMT group. In addition, the acetic acid deprotection necessitates two lyophilization steps after purification and an optional extraction to remove dimethoxytritanol from the product.

These disadvantages can be overcome by using a polymer reverse phase (RP) packing in a cartridge or column. Because these resins are stable in the pH range 1-13, the ammonia solution, diluted with water, can be added directly to the purification matrix. After elution of failure sequences, the DMT group can be removed and washed from the matrix. The fully deprotected product can then be eluted and isolated by lyophilization.

Glen Research is delighted to offer Polymer RP1 in bulk for use in the preparation of cartridges and columns for purification of synthetic oligonucleotides. We also offer columns and fittings for DNA purification on a variety of synthesis scales. A typical configuration is shown in Figure 1. Ordering information is shown below. 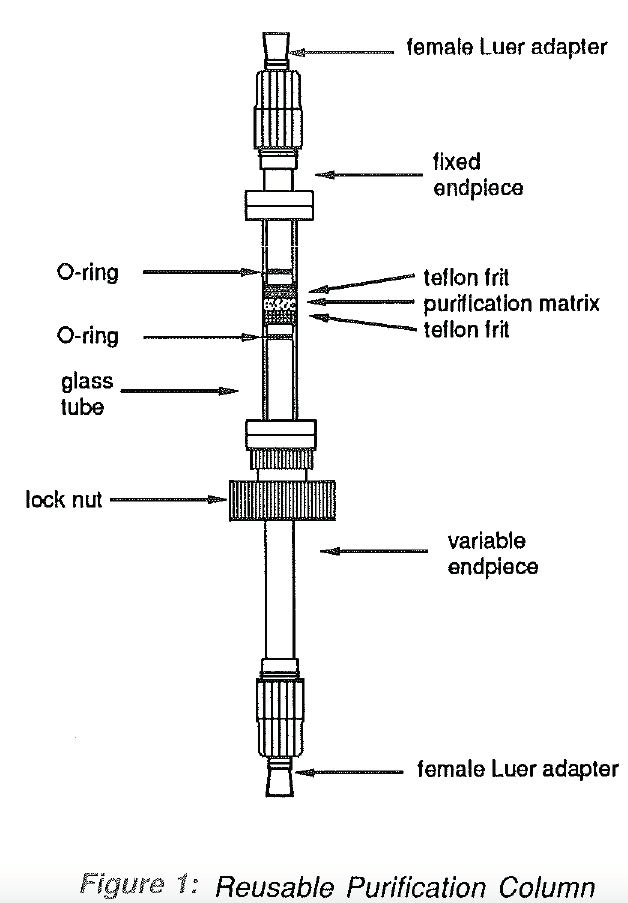