Glen Report 1-21:Chemical Modification of the 5'-Terminus of Oligonucleotides

As the use of synthetic oligonucleotides in biomedical research becomes more and more sophisticated, the need for rapid and simple modification of oligonucleotides becomes increasingly apparent. Because conventional automated synthesis proceeds from 3' to 5', the 5'-terminus is clearly readily available for manipulation. Indeed, the ability to attach a suitable molecule to the 5'-terminus for use as a label is significant in the continuing development of non-radioactive probes and in DNA sequencing. The reactivity of the 5'-hydroxyl group of oligonucleotides is not sufficiently different from the other active groups to allow attachment of labels directly to the 5'-position. Consequently, several modifications, including 5'-amines 1 and 5'-thiols2, have been examined. There are, however, several disadvantages to direct substitution of the 5'-hydroxyl group: 1) the resulting link between the oligonucleotide and an attached molecule is short, an undesirable feature in many applications; and 2) the phosphoramidites of all four modified nucleosides must be prepared to use present day synthesis protocols and still permit flexibility of sequence. 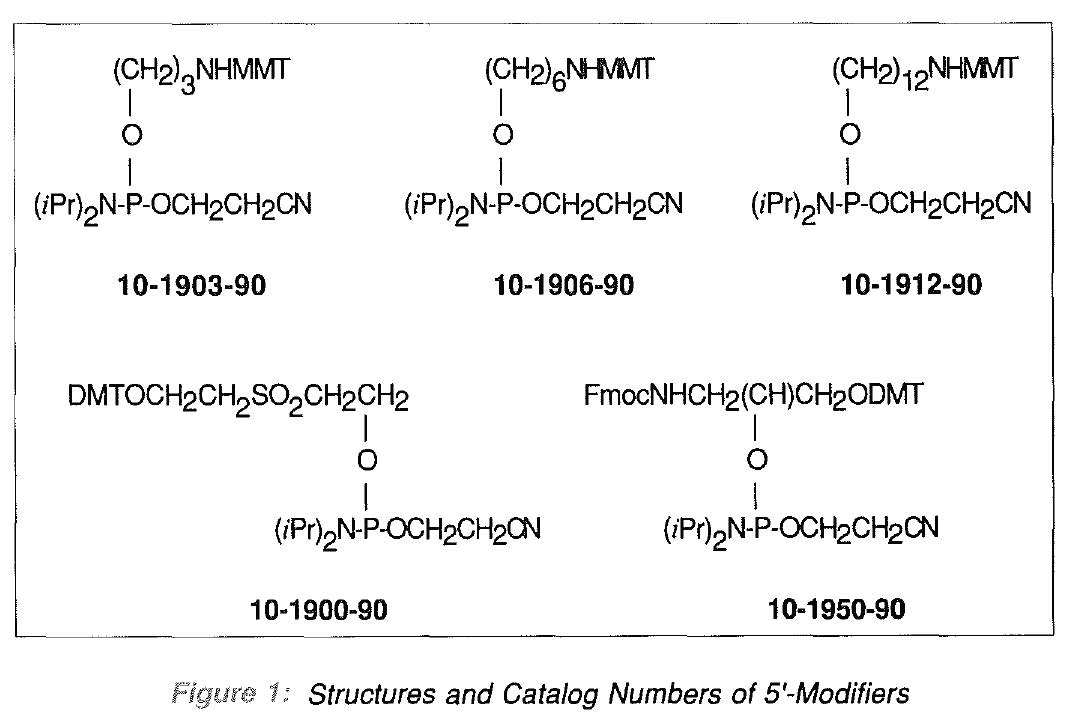 A more general approach to the modification of the 5'-terminus is to use reagents which would couple to the 5'-hydroxyl of an oligonucleotide. To be most effective, these reagents should be compatible with automated DNA synthesizers. A method which satisfies the above criteria is the use of phosphoramidite reagents, as shown in Figure 1 overleaf, which are readily adapted for use in automated synthesizers with little or no modification to existing protocols.

5'-Amino-Modifiers are β-cyanoethyl (CE) phosphoramidites which, when activated with 1H-tetrazole, can couple to the 5'-terminus of the oligonucleotide in the same time frame and with similar efficiency as nucleoside phosphoramidites.

The linker portion of the 5'-Amino Modifiers which Glen Research has made available, consists of an alkyl chain of three, six, or twelve carbons attached to phosphorus as a CE phosphoramidite. The primary amine is blocked with the monomethoxytrityl (MMT) group which is a more stable amine protecting group than dimethoxytrityl (DMT) and, therefore, more likely to survive synthesis procedures. It can be removed in the final step of the synthesis while the oligonucleotide is still support-bound. (Following removal of the amine protecting group, the modified oligonucleotide is free for further derivatization on the solid support.) Alternatively, the MMT group can be left attached to the 5'-position to use its lipophilic character to aid in oligonucleotide purification by RP HPLC. After purification, it is conveniently removed with 80% acetic acid.

The three different linkers allow flexibility in the design of modified oligonucleotides. The three carbon linker is multi-purposed and can be used to attach4 compounds where proximity to the oligonucleotide poses no problem. The longer carbon chain linkers have specific uses in affinity chromatography where the oligonucleotide must be adequately spaced from the support surface, and for labeling with biotin5 or fluorescent labels where interaction with the oligonucleotide, or the duplex it forms, may quench some of the fluorescence.

The 5'-Branched Modifier is a three carbon linker molecule with a primary amine protected with base-labile Fmoc and a primary hydroxyl protected with DMT. This compound can be added to the 5'-terminus during several cycles to generate multiple amine functionalities. Also, it can be used in combination with a 5'-Amino-Modifier or even protected nucleoside phosphoramidites. After removal of the Fmoc protecting group(s), a modified oligonucleotide with multiple primary amines is obtained. In this way, a modified oligonucleotide can be designed such that the addition of several molecules of biotin or a fluorescent label may enhance its sensitivity in a particular assay procedure.

Chemical phosphorylation has been described6 in the past but has not supplanted the enzymatic technique. Two new methods recently described also have significant shortcomings. In one method7, no simple means of following coupling efficiency exists and, in the other8, the deprotection step requires the use of additional reagents, i.e., iodine or silver nitrate. These limitations were recently solved9 by the 5'-Chemical Phosphorylation Reagent. This reagent can be used with a standard phosphoramidite protocol and has two significant attributes. It contains a DMT group which can be removed to determine coupling efficiency, and a sulfonylethyl group which is conveniently removed by β-elimination with ammonia at the same time as the cyanoethyl protecting groups. These features allow complete compatibility with automated DNA synthesis.

Glen Research offers these 5'-modifiers, packaged in industry standard vials. They are available in 100 μM amounts, allowing approximately five couplings on a 1 μM scale, and in bulk for custom orders.

Glen Research 5'-Modifiers are designed for use in automated synthesizers to functionalize the 5'-terminus of a target oligonucleotide. With the exception of the 5'-Branched Modifier, they are viscous oils. The vials should therefore be stored upright to allow the oil to gather in the bottom. To prepare the solution, add 1 ml of anhydrous acetonitrile to each vial and swirl the liquid occasionally for about 5 minutes to ensure complete dissolution of the oil. The concentration of the resulting solution is 0.1 M and this is suitable for use in any DNA synthesis system.

Since the 5'-Modifiers are CE phosphoramidites they are conveniently coupled to the 5'-terminus of a synthetic oligonucleotide. No change from standard addition protocols is required.

The terminal DMT or MMT group can be removed on the synthesizer by the standard deblocking method. Note that the solution of MMT cation produced by acid deprotection is yellow and can not be quantified by internal trityl monitors.

The Fmoc protecting group of the 5'-Branched Modifier is removed during base deprotection with ammonia.

Alternatively, after iodine oxidation and ammonia deprotection, the synthetic oligonucleotide can be purified by RP HPLC. The MMT group is then removed using acetic acid : water (80:20) at room temperature for 1 hour.