Techniques and reagents for the modification of the 5'-terminus and the phosphate backbone of synthetic oligonucleotides have been described in this and the previous issue of the Glen Research Report and are in fairly widespread use. However, interest in the development of antisense oligonucleotides has focused attention on the ability to attach marker and carrier molecules to the 3' terminus. The 3'-hydroxyl group, although accessible for chemical modification, does not support specific reaction at that position because of the presence of competitive reactive centers. It may be possible to design a support which would allow the protected oligonucleotide to be released while all other protecting groups remain intact. Chemical modification reactions could then proceed at the free 3'-hydroxyl group. To our knowledge, no such support has been described.

Reaction at the 3' ·Terminus

One approach to 3'-modification is to prepare an oligonucleotide with a ribonucleoside terminus. Periodate oxidation of the 2',3'-diol cleaves the 2'-3' bond and generates reactive aldehyde groups which are available for specific chemical manipulation, as shown in Figure 2. 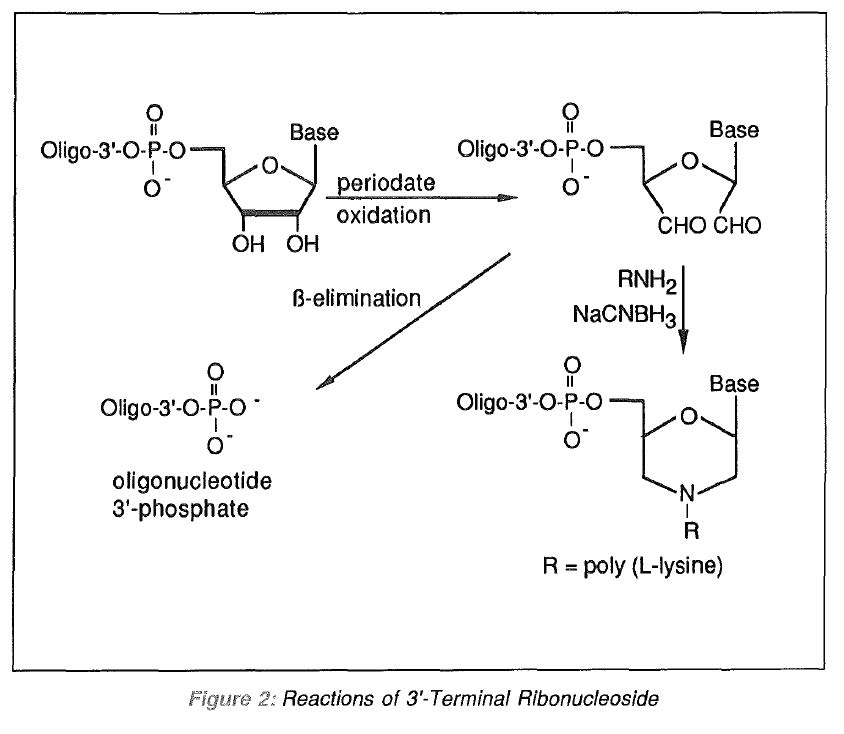 Two recent papers1,2 describe the attachment of a ribonucleoside to the 3'-terminus of an oligodeoxynucleotide using T4 RNA ligase. Following periodate oxidation, the cleaved ribose ring can be converted to a morpholino ring by the addition of a primary amine. In this way, the authors describe the attachment of poly (L-lysine) at the 3'-terminus of an antisense oligonucleotide. The addition of the macromolecular carrier significantly improved intracellular delivery of the anti-sense oligonucleotide.

Similarly, other molecules could be attached through a primary amine, creating the opportunity to label oligonucleotides at the 3'-terminus. Also, the possibility for direct attachment of an oligonucleotide to an amino support to form an affinity support exists.

A simpler approach to the preparation of an oligonucleotide containing a ribonucleoside terminus is to carry out DNA synthesis on an RNA support.

Glen Research recently introduced RNA supports in which protected ribonucleosides are attached to the most popular CPG support using an aminopropyl spacer. With 5'-DMT protection and all other protecting groups base-labile, the use of these supports is identical to the corresponding DNA supports. The structure of the ribonucleoside supports is shown in Figure 3. These supports are suitable for use in producing oligodeoxynucleotides modified at the 3'-terminus but are, of course, also used in automated RNA synthesis.